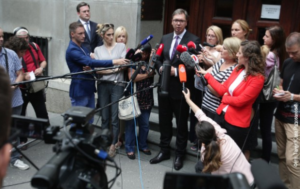 „I want Serbs in Kosovo and Metohija not only to have a nice weekend, but nice weeks and months ahead of us, and I want them to feel safe. I know how difficult it is for them, especially in Metohija, but also for Serbs everywhere. It’s not just the north, it is much more difficult south of the Ibar, but what they need to know is that the Serbian state will not allow a pogrom of the Serbian people, as we had in 2004, as we had in May ’95 at the time of the Flash Operation, and at the beginning of August at the time of the Operation Storm. Serbia will never allow something like this to happen to anyone again,“ the Serbian President Aleksandar Vucic said today after a meeting with the Patriarch Irinej. He addressed the public following the tensions, warnings and speculations about the alleged risk of an incident in the North, as well as the sudden letter that Vucic sent to Kosovo Serbs, stating that there will be no new „Storm“. The President also harshly criticized the Serbian opposition, „tycoon media“, some Serbs from Kosovo and the international community, and „foreign agencies“. We publish Vucic’s key messages.

„It is very interesting to see and analyze one model of political, media and other types of interference in the political life of Serbia, various world services that have managed to bring us into the situation in the last ten days so that we cannot openly and directly speak of the terrible hypocrisy of those who are not implementing the Brussels Agreement, which has the force of an international legal agreement, that we cannot talk about the most serious topic, because they have placed us, with a multi-layered and diverse agency activities, in the position that we must defend ourselves against someone’s fabrications and gossip, and that we should prosper today and be happy that nothing has happened. And we should be happy that something has happened, if the ASM was established, and not that we are happy that nothing has happened; that we are alive, to be happy that they have not killed us today, and here we are, happy that they have not killed us today; because we had actions in the previous days and weeks both from Pristina and from Belgrade, from various outside centers of power, that something terrible was about to happen; that criminals from Belgrade are negotiating with some minor criminals from Pristina to create a conflict in order to realize their political ambitions. “

„If you take a good look at what many who criticized us from Kosovo and Metohija did, those who were part of the DOS (Democratic Opposition of Serbia) system and those who were part of some other systems and those who were part of some other organizations, not only political, the entire time they were, de facto, protecting Kosovo’s comprehensive independence. Pay attention to their vocabulary, pay attention to everything behind it, the entire time the independence and sovereignty of the territory of the Republic of Kosovo, not the Republic of Serbia, but the Republic of Kosovo was being protected. Please read carefully and everything will be clear to you. I do not have to say anything else, and I think that people understand this, or if they do not, they will understand, and I will not participate in protecting the comprehensive sovereignty and comprehensive independence of the Republic of Kosovo. Let them continue to do this, let them praise multiculturalism and how this multiculturalism is prospering.“

„We would like, unlike some, that not all of them are ‘Kosovars’, as it says (on their ID cards), and that, as much as possible, they belong to the Serbian state, at least as much as possible, and that is my sin and that is the sin of the Serbian state. And those lectures are held by those who have already changed their nationality to ‘Kosovar’. Serbs, you know, used to be ‘Kosovarci’ and Albanians ‘Kosovars’, but they have now accepted that they are ‘Kosovars’, and they are still holding patriotic lessons – accusations against their own state are always carried out by those who are unsuccessful in their work, so they return home, beat their wife and children because they are always guilty of something, in the same way, they are always looking for someone to blame in their own country and to help a third (party) to realize their goals and interests.“

„From the international community, if it is a euphemism for the Western world, I do not expect anything.“

„We have adopted a number of important measures and decisions, primarily for members of the military.“

„We will make our decisions, and we have made some of them today, which are not for the public, but we will also introduce these new decisions to the international community. We will not move recklessly, we will not allow anyone to find a false reason why he could perform any repressive measures against the Serbs anywhere that Serbs live, but we will try to strengthen our negotiating position and we will take some other measures that will deter those who would terrorize the Serbs in any way.“

„In any case, regardless of all this, we will be better prepared. We will respond seriously, preserving the peace and stability, but the whole world is laughing at us because they cannot implement anything the Albanians have signed and that the world can say that it does not matter what Albanians did not accomplish, it is important that you Serbs have accomplished it, and then they will show up with that additional hypocrisy, as that Kocijancic says, we call on both sides, she will not call on Serbs to be a national minority in Slovenia, although they are the largest ethnic group after the Slovenians, but I will not talk about this now, it is a different issue…“

„I openly told the Patriarch everything I think about Kosovo and Metohija, and about all other important issues. I am pleased that he listened to me. And I listened to everything he had to say and everything that the Serbian church had to say.“

Thaci: Kosovo is committed to preserving the peace and completing the draft of the ASM statute

KFOR Unit at the hydroelectric power plant. KFOR: We are performing our duty under Resolution 1244, the situation is calm

Djuric: False allegations against the state and espionage activities

Kosovo Police: We are not involved in „scenarios“, information unfounded and harmful

Vucic: Idle talk, nothing happened, God willing, nothing will happen

Bishop Teodosije’s appeal against the partition and demarcation: The international community should not allow an exodus

Vucic: They are not interested in the ASM, their only goal is to occupy the North

„Obsession with the North“: A condition for the dialogue – no attempt to take over the territory of the North

Vucic will address the nation first and foremost in September, without demarcation with Albanians the „Vranje scenario“ will not happen for 40 but in 20 years time

Vucic: Hunger for the occupation of the North of Kosovo, the North is standing in the way of the Green Transversa