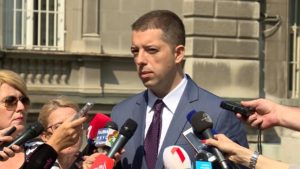 Serbia is systematically weakened by false allegations against the state. The allegations of scenarios against its people in Kosovo made by various political and religious representatives. The security services received tasks in connection with these espionage activities – said the Head of the Kosovo Office, Marko Djuric, after an urgent session of the National Security Council scheduled by Serbian President Aleksandar Vucic. In today’s address, Djuric has repeatedly mentioned „espionage activities“, without specifying any further details. He did not comment on the statements of the Kosovo President Hashim Thaci on joining the municipalities of southern Serbia with Kosovo.

“Instead of the main topic being that the agreement on the Association of Serb Municipalities was not implemented even after 1,930 days, we had to discuss the fact that in the past few days some Serbs have created an atmosphere in which they accused their own state of planning scenarios of staged conflicts,” Djuric said.

“They talked about false scenarios and imposed a kind of psychosis, they did not act in the interests of their country,” Djuric said, adding that they were, in fact, helping Pristina by spreading false information.

„The army and police received special tasks in connection with these espionage activities,“ Djuric said.

The warnings of „Storm“, „occupation“, „intrusion into“ the North by Pristina have been a current topic in the last few months. Following the article in Vecernje Novosti about the „Golden Saber“ operation and „cutting off“ the North, the same warnings were repeated by the Serbian president, Aleksandar Vucic.

The same claims were made yesterday by certain Belgrade media and tabloids, after which today’s urgent session of the National Security Council was scheduled, and the Serbian president sent an open letter to Kosovo Serbs, stating that there will be no new Operation Storm.