After frequent warnings and alarming announcements of the Serbian President Aleksandar Vucic on the North of Kosovo over the past number of months, certain Belgrade-based media and tabloids reported today that the President of the Republic and the Supreme Commander the Serbian Armed Forces scheduled a session of the National Security Council for tomorrow at 8 o’clock. Referring to the information and confirmation from the Serbian Presidency, the reason for the session is „the information“ that „in the next 48 hours a destabilization of the security situation in the north of Kosovo and Metohija could occur.“

„The British are preparing a „Storm“ in Kosovo! London made a terrible mistake, a new pogrom of Serbs is on the way!“- reported the tabloid newspaper Informer.

„There is operational information that the Albanians, with the help of NATO, will try to take over Gazivode,“ reported Belgrade-based daily newspaper Blic.

In the midst of the media announcements for the north of Kosovo, Gazivode and the municipality of Zubin Potok, further news arrived from Pristina about the northern municipality. Kosovo media published a statement by the Kosovo Ministry after the meeting:

„Minister of Infrastructure Pal Lekaj welcomed the Mayor of Zubin Potok Stevan Vulovic today, with whom he signed cooperation agreements for two projects in the municipality. The value of these two projects is €626,000 and they are important for the economic development and tourism of this area, as well as for free and unhindered movement for all our citizens.

Mayor of Zubin Potok Stevan Vulovic said that these two projects will be of great help to the citizens of his municipality and for the greater development of tourism in this municipality.”

„Namely, Kosovo Albanians are said to be preparing an incursion into the north of Kosovo on Saturday morning and the takeover of the Gazivode reservoir in order to prevent Serbs from getting anything in Kosovo,“ Pink TV reported.

„The incursion into the north of Kosovo is said to be aimed at preventing the formation of the Association of Serb Municipalities for which the deadline expires tomorrow, August 4th, and weakening the Serbian position for the negotiations in Brussels. Serbian Army, Serbian police and security services are on standby,“ the same media added.

Blic stated that they will discuss the ways „Serbian interests and people in Kosovo and Metohija can be protected“ during the session.

In Pristina, an urgent meeting of the local Security Council was also held, after which Kosovo Prime Minister Ramush Haradinaj estimated that the situation in Kosovo was „calm and stable,“ but he also called for the institutions to be in a state of „readiness“.

„I have called for the increase in the readiness of institutions in the country in the event of any disturbance. The situation is calm and stable. Everyone should feel safe,“ Haradinaj said, as the Pristina-based media reported.

While the Serbian media report that Haradinaj warned Serbs from the North after this meeting, Kosovo media claim that the warning to the Serbs arrived in relation to „autonomy“.

„When asked about the warning related to the declaration of autonomy in the north, Haradinaj said it was a rhetoric from Belgrade,“ Pristina-based portal Gazeta Express reported.

„If someone is going beyond the framework of Kosovo laws and treaties, the law will work, there is no dilemma, and they will receive their answer. Regarding the north, we have always welcomed the arrival of every citizen of the world and he was well received in any part of Kosovo. Anyone entering the territory of Kosovo in order to interfere with public order and peace will receive the answer of our law. We are in a state of readiness if there is a disruption to law and order,“ said Haradinaj, as Express reported.

He added that he did not have any information, but „whatever happens the state institutions will be able to react.“

Such alarming announcements on the North have been forthcoming since May. The most drastic announcement was repeatedly made by the President of Serbia and the Supreme Commander of the Serbian Armed Forces, Aleksandar Vucic, specifically about the warnings of a Storm (Operation) in the North. The renowned Belgrade newspaper Vecernje Novosti had previously published the details of the „Golden Saber“ operation on „the occupation of the North“.

In the meantime, the topic of the partition of Kosovo appeared frequently in the media, both in Belgrade and Pristina, and the Bishop of Raska-Prizren Teodosije recently appealed not to allow a solution that would lead to the exodus of the Serbs and opposed the partition.

On Wednesday, the Abbot of Visoki Decani Monastery, Sava Janjic, warned of “the dangerous information circulating in Kosovo about the recent scenario of a mutually staged incident in the North“.

„I have denied all the (indecent) gossip they have concocted. Nothing happened, and God willing, nothing will happen“- said the Serbian President, Aleksandar Vucic from the Pink TV studio. 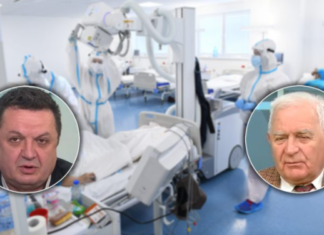