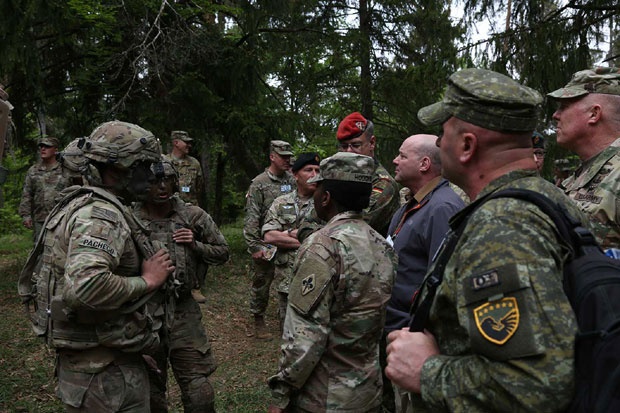 “Russian intelligence has informed our intelligence that Albanians, with the support of the USA, are preparing an action. Without the knowledge of other NATO members, training is ongoing in Film City and Pomazatin. The Kosovo Security Forces, with American logistical support, are preparing an incursion to north Kosovo and Metohija in September, and this operation is being prepared in secret under the code name Golden Saber“ – is what Belgrade Vecernje Novosti writes in its latest article. Just as a reminder, the same newspaper published an identical article last week with shocking announcements for the North. At that time, they reported that „the authorities in Pristina, with the help of NATO allies, are preparing an incursion at the Jarinje and Brnjak crossings“ while the „goal: is to confirm ‘sovereignty’ and a psychological attack on Serbs”, and that „Albanians ordered 12,000 German-made rocket launchers, ‘Armbrust’.“ Below we present Sunday’s original article which was published under the title „NOVOSTI REVEALS SECRET OPERATION: Thaci with America and ‘Golden Saber’ takes over north KiM“.

“Based on ‘Novosti’ sources, Russian intelligence has informed our intelligence services of these dangerous intentions of the authorities in Pristina, while the aim is to secure the „sovereignty” of the false state throughout its territory.

According to the information provided by Russian intelligence, KSF members are training in the bases at ‘Film City’ in Pristina and ‘Pomazatin’ near Kosovo Polje, while it is interesting that the Americans are keeping everything strictly confidential and even partner states in the KFOR contingent and NATO have no information on this.

As it is obvious that there is no progress at the negotiating table, owing to Hashim Thaci and Ramush Haradinaj, with the tacit blessing of the EU, Albanians are turning to instilled tactics to suspend all previous agreements and achieve the only goal they were dedicated towards from the beginning – independence of a so-called Kosovo and the establishment of factual authority throughout the territory through violence.

“They are buying ‘Armbrust’s’ and helicopters

Despite their powerful protector, the Albanians, are nonetheless afraid of a possible reaction from the Serbian Army. This is the reason why they rushed to buy 12,000 pieces of ‘Armbrust’ German-made light-rocket launchers. This is a weapon intended for the destruction of armored vehicles and this arrangement, from a Pristina viewpoint is logical. Because, it is estimated that in the event of an escalation of violence our forces would move towards the Administrative Boundary with tanks, and the Albanians would have an answer to this kind of maneuver. Also, Pristina is negotiating the purchase of five modern helicopters from an unknown manufacturer. Pilot training is already underway in Turkey.“

Russians warn that the KSF are planning to take over the region in the north in the direction of the administrative boundaries at Jarinje and Brnjak, as well as the green belt around the populated areas. According to their information, KFOR would assist in surveying the territory, while police units and EULEX would be responsible for taking over settlements if there is resistance from the local population. The basic idea of ​​this plan is to cause panic and a sense of defeatism to our population in the north of Kosovo, because during the implementation of this action they would be practically cut off from central Serbia.
Even the President of Serbia hinted on Friday that its interim institutions in the southern province are preparing for such a black scenario:

– Albanians are running away from the Brussels Agreement, and unfortunately, the Agreement is not respected even by those under whose auspices it was concluded. The context of the story from the Albanian officials regarding the energy system is they will take over the control and occupy the north.

At the same time, the head of state has sent a public plea to international representatives to listen carefully and understand the messages from the Albanians, and prevent their possible attempt for an incursion to the north and further attacks against the Serb population.

– The world must understand that a new Oluja (Storm) shall not happen!
Vucic explained that there is no energy agreement, but there are lies about this, and there is an intention to „take (over) our electricity distribution network“:

– They think that due to the pressure coming from two Western countries, we need to give away Gazivode and Valac. Joint management was even offered, but they refused.

The President reminded that Gazivode is located in the territory of central Serbia and partly in the territory of Zubin Potok, and that Pristina authorities have never been interested in hearing the arguments of the Serbian side. As he said, he is worried by the fact that Haradinaj and other politicians say that the ASM should not be formed until the energy story is closed, because he is convinced that they do not say this for themselves, but rather someone else is speaking on their behalf.

Vucic reminded, exactly on the April 20th, when Pristina allegedly started implementing any agreements reached, it was heard that they were not interested in this:

– Even their western mentors know this, and all together they do not care about implementing them. I cannot listen any longer to their stories that they are concerned and that both sides must implement the agreement, the famous syntagma which is a euphemism for their own irresponsibility.

Neither Haradinaj, nor Arifi nor Hoxhaj ever say anything by themselves, but, as Vucic stated, „some others speak through them and through them“:

– Therefore, I’m worried by the incidents which we did not have on this scale in the last five years. I am afraid that there will be even more severe and harder attacks, and Serbia, not because of the state that I am running today, but rather because of previous governments, is deprived of the ability to react in any way in KiM.

The President recalled the matrix that has existed since 2003, when the „standards before the status“ ideal was in place, and, as he concluded, there were no standards then, nor are there any today. He said that the trigger for giving some kind of independence were riots and turmoil in 2004 when the Albanians took the matter into their own hands, always with the direct support of some Western countries.“

Vucic: The only thing Albanians are interested in is how to occupy the North