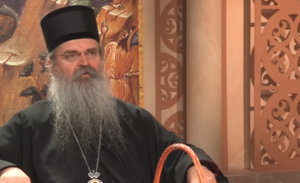 Bishop of Raska and Prizren Teodosije appealed to the public today, stating that they are gravely concerned because of the frequent politically and morally irresponsible statements of certain politicians from both sides who talk about a “final solution” in the context of “territorial partition” and the “border separation between Serbs and the Albanians”. „Such statements among our people, but also in the wider region and the world creates concern and uneasiness. Does it mean that we will come to a situation that the majority of Kosovo-Metohija Serbs who live south of the river Ibar will have to leave their homes and our most important holy sites – Pec Patriarchate, Decani, Gracanica, Prizren? Does it mean that the freedom and rights of those who could not choose to which people they would be born can be regulated only by territorial partition and creating ethnically compact territories?“ – Bishop Teodosije asked. He particularly appealed to international representatives to „stand clearly and unequivocally in the protection of all those who are resolute to stay and live here in peace and not allow such scenarios which would force them into exodus but rather do more in the protection of their rights“. He also stated: „All of us in Kosovo and Metohija remain concerned by the growing criminalization of political life, which is dominated by tribal clans behind the names of political parties and where interests of individuals are placed above the interest of citizens. This is not a path towards Europe for any society in the Western Balkans but towards further isolation, poverty and absence of perspectives for young people who deserve a better life.“ We publish the original appeal:

As a Bishop of Raska and Prizren and an Archpastor of the Orthodox Christians in the regions of Kosovo, Metohija and Raška, with tremendous pastoral and moral responsibility I feel the need to express my grave concern regarding a series of political statements on Kosovo-Metohija in the recent time which fill our hearts with increasing uncertainty and disquiet. For almost twenty years our Diocese supported by our Patriarch and our fellow Bishops, and with financial assistance of the Government of Republic of Serbia and other local and international donors, makes tremendous efforts to provide normal life for our Church, the reconstruction of our destroyed holy sites, the return of our displaced people, as well as the peaceful life of those who still continue to live in this region. Inspired with this concern and the ongoing dialog between Belgrade and Pristina in Brussels the Holy Assembly of Bishops of the SOC expressed a clear, unified and unequivocal position in its statement on 10 May 2018.

It is a matter of public knowledge that our Diocese with the support of the entire Serbian Orthodox Church even before the armed conflict in Kosovo and Metohija made significant efforts to help avoiding the resolution of existing problems by force. We took part in a number of discussions with international diplomats and representatives of Kosovo Albanians, both before and after the armed conflict in 1998-1999, with a clear goal to carry out the Gospel message of our Church that we must be witnesses of peace in the world. At Decani Monastery during the war, we received and sheltered refugees, Serbs, Albanians, Roma and others, raising our voice amid the violence against innocent civilians, regardless of their ethnic or religious background. After the armed conflict, our Diocese was an active participant in the inter-ethnic dialog and cooperated with international representatives, making tremendous efforts to protect our people and our holy sites. Regrettably, despite all our endeavors around 200.000 of our people were forced to leave their homes in the time of “the internationally granted peace”, many villages, our cemeteries were devastated and 150 churches destroyed. Nevertheless, we did not give up the dialog. Under the sponsorship of the Council of Europe, since 2005 we reconstructed a number of our churches and monasteries as well as the Seminary of Sts. Cyril and Methodius in Prizren. Upon invitation of the Government of Serbia in 2008, we took part in the negotiations in Vienna, where we agreed important principles for the protection and future of our people and the holy sites in Kosovo and Metohija.

With such a commitment for dialog and peaceful resolution of all conflicts, we supported the beginning of the technical dialog between Belgrade and Pristina in Brussels and hoped that practical agreements would be reached with the goal of providing an easier life for all peoples in the region, protection of our holy sites, property, identity, human rights and freedoms, especially of the vulnerable Serbian people. That is why we are now gravely concerned because of frequent politically and morally irresponsible statements of certain politicians on both sides who talk about a “final solution” in the context of the “territorial partition” and the “border separation between the Serbs and the Albanians”. Such statements among our people but also wider in the region and the world create concern and uneasiness. Does it mean that we will come to the situation that the majority of Kosovo-Metohija Serbs who live south of the river Ibar will have to leave their homes and our most important holy sites – Pec Patriarchate, Decani, Gracanica, Prizren? Does it mean that the freedom and rights of those could not choose in which people they would be born can be regulated only by territorial partition and creating ethnically compact territories? Obviously that this principle, which, by the way, was the cause of suffering of so many innocent people during the disruption of former Yugoslavia in the 90ies, presents a continual threat to peace and stability, and not only in the Western Balkans. It would create an additional precedent for new separatisms in Europe and all over the world and would encourage a series of bloodsheds, suffering and migrations of civilian population only because, after the deal reached by the politicians, they found themselves on the “wrong side” of the divide.

Therefore as a Bishop, but first of all as a Christian who has lived the most of his life with his clergy, monks and nuns in Kosovo and Metohija, I appeal on politicians both in Belgrade and in Pristina, the international mediators in the dialog and other officials that the resolution of all issues in Kosovo and Metohija must and can be sought only with the goal of preserving peace and security for all citizens, especially non-majority ethnic and religious communities, preservation of their religious and cultural heritage, historical identity, human and religious freedoms. Insisting on partition as the “best model” neglects a number of crucially important issues such as: the freedom of return of the displaced people, resolving the issue of the missing persons, protection of property rights, providing adequate health protection and education, religious and human rights which must be guaranteed both on the level of laws but also on the level of the settlement which is achieved.

Such a position of our Church does not mean a call for “a frozen conflict” because our Church has always been against any conflict. This is an appeal primarily on responsible and transparent continuation of the dialog which must be returned within the framework which would be in function of stability of the region and the European continent and fully compatible with all relevant international treaties and standards, among which a particular importance belongs to the UNSCR 1244. Otherwise, as any other land swap or partition in history this one would bring about a massive displacement of the civilian population, destruction of the centuries old spiritual and cultural heritage of our people and would cause irreparable damage to all. We ask a question – Do we need this now in 21st century and who are those who will have historical and moral “courage” to precipitate an exodus and tragedy of dozens of thousands of innocent people who managed to survive at their homes for 20 years after the armed conflict.

Almost on the daily basis we keep hearing statements which increase concern and uncertainty among our people and do not contribute to the stability and peaceful future. It is exactly because of such statements that more and more Serbs in fear decide to sell their property instead of being encouraged to stay in their homes. Although it is difficult today, with faith in God and his help we must preserve that which our ancestors left us as inheritance.

I particularly appeal on international representatives in Kosovo and Metohija and all over the world to stand clearly and unequivocally in protection of all those who are resolute to stay and live here in peace and not allow such scenarios which would force them into exodus but rather do more in protection of their rights. I would particularly mention the case of the adamant refusal of Kosovo institutions to implement the decision of the Kosovo Constitutional Court on Decani Monastery land and the scandalous decision of the Government in Pristina to upgrade an existing local 10 km long road into an international transit road right in front of the major UNESCO monument and the 14th century Monastery, in direct opposition to the existing laws and UNESCO standards. Frequent attacks on Serbs which as a rule continue with impunity, almost everyday thefts and other kinds of ethnic discrimination are not going to bring benefit to anyone, especially not Kosovo Albanians. Without the rule of law and respect of freedom of all citizens regardless of their ethnic origin, no society will have better future.

All of us in Kosovo and Metohija remain concerned by the growing criminalization of the political life, which is dominated by tribal clans behind the names of political parties and where interests of individuals are placed above the interest of citizens. This is not a path towards Europe for any society in Western Balkans but towards further isolation, poverty and absence of perspectives for the young people who deserve better life. An increasing use of the nationalistic rhetoric as a smoke screen for criminal activities is sad and disappointing and deeply discourages the young generation.

With prayer to God, I strongly believe that this pastoral appeal of mine will not remain as “the voice of one crying in the wilderness” but will serve as a reminder for all who have taken upon their shoulders the heavy political responsibility for the future of Kosovo and Metohija and our lives to work on a just solution.