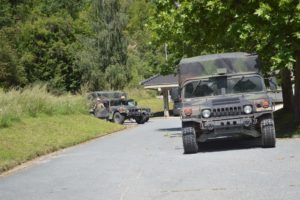 A unit of the US contingent of KFOR Multinational Battle Group East has been deployed around the Gazivode dam and hydroelectric power station since this morning. A military helicopter flew over the North last night also. KFOR denied allegations made by certain Belgrade and Pristina media that units of this force blocked the Gazivode dam. KFOR has not taken control over the dam and any hydroelectric power station. We are performing our normal duty under UNSCR 1244 mandate. The situation is calm – the KFOR Public Affairs Office said in a statement for KoSSev.

When asked by KoSSev to explain what is happening taking into account the media headlines, The KFOR Public Affairs Office replied:

„KFOR is performing its normal duty under UNSCR 1244 mandate. There is no blockage of the Gazivode dam, KFOR has not taken control over the dam and any hydroelectric power station. The dam is accessible. The situation is calm and under control. KFOR is here to protect all citizens in Kosovo.“ 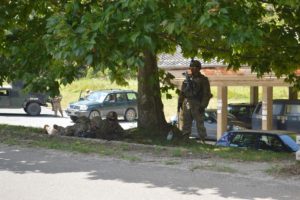 They confirmed that the Unit stationed in Zubin Potok is KFOR Multinational Battle Group East, the same unit that hosted journalists at Camp Nothing Hill in Leposavic earlier this week, during the visit of the Commander of the Allied Joint Force Command in Naples, Admiral James Foggo, accompanied by KFOR Commander Salvatore Cuoci.

“It is a multinational unit, but the soldiers on duty there now are US,” the KFOR Public Affairs Office said, adding that they can not specify their number in the field, since these units are moving and their number can change depending on the time.

The KoSSev team visited Gazivode Lake today – the dam and power station in Velji Breg. The soldiers stood quietly beside their vehicles, except three of them stationed along the main road, two of them lying with weapons, and a third one standing. Traffic proceeded smoothly, there was no sign of local people in their vicinity. The situation in Zubin Potok is calm, the citizens are carrying out their daily activities as normal. At the Gazivode dam itself, where, at this time of the year, there are several bathers, we did not find any today, except for a jet ski that cruised in that part of the lake.

KFOR units are stationed in the far North after yesterday’s headlines in certain Belgrade media and tabloids about a Gazivode “takeover” and a new Operation Storm – the President of Serbia has repeatedly warned about this on several occasions. Following these headlines, an urgent session of the National Security Council in Belgrade was held today, and the President of the Republic sent an open letter to the Kosovo Serbs, stating that there will be no new Operation Storm. Read more in the news:

Thaci: Kosovo is committed to preserving the peace and completing the draft of the ASM statute