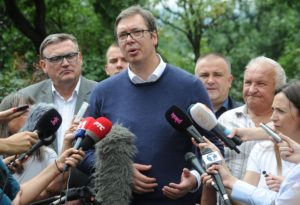 „Nothing.“ „Nothing, as usual. The deadline expires on August 4th. You remember what I told you four months ago, I said – nothing will be accomplished. Their only goal is to occupy the north of Kosovo. And they have no other goal. They are not interested in the ASM (Association of Serb Municipalities), they were never interested in it at all,“ the Serbian President Aleksandar Vucic told the public today, while responding to a journalist’s question on „what will happen with the ASM“, during his visit to the construction site of the bypass road around Belgrade, in Ostruznica.

He reiterated that it is „easy to criticize every proposal for the solution for Kosovo“.

„No one in Serbia is ever for any solution. Everyone knows they are against everything, but nobody knows why this is. When you ask them what the solution is – they do not know and have nothing to say,“ Vucic said in a statement.

„Everyone is selling whatever they want, and only Serbs cannot sell anything. Well, that is not acceptable“

Vucic also commented on Pristina’s allegations of alleged weapon supplies as a means of lobbying for the annulment of Kosovo’s recognition:

„I can see that somebody would like to accuse Serbia of something. I never understood that. Are you accusing us of the same thing I brag about? We will sell even more weapons, wherever it is allowed, of course. And I heard some experts say – ‘we saw a Serbian rifle here’. You do not say? And I saw American rifles everywhere. Wherever there is war, I see American rifles, Czech ammunition, everyone is selling whatever they want, and only Serbs cannot sell anything. Well, that is not acceptable. We sell in accordance with the rules of international public law, we will keep doing that and we will continue to make money on this point, all in accordance with the laws of this country and in accordance with international law.“

He, however, „knows what he is looking for“ and what he can „offer to the people“, but also that „everything is difficult,“ while „he is not sure and optimistic that it will succeed“, because an agreement must be made with the other side and all international factors – USA, EU, Russia, China.

Responding to journalists’ questions, he commented, as the media reported, the UK’s views on Kosovo.

He said that the English „want to recognize the independence of Kosovo.“

„From their point of view, this is a solution for them, so that Serbia gets almost nothing. This is not a compromise solution for us. Serbia wants a compromise solution. Is it the only one? I’m not sure. But they are saying this unequivocally, and this has been their position since 2008. This has been their position even earlier, but they were ‘acting English’ since 2008, when they finally recognized Kosovo’s independence. They hope and expect that Serbia could fully recognize its (Kosovo’s) independence as the United Kingdom did. That’s what they hope and I do not have to tell you how unrealistic it is,“ concluded Vucic.

Since the beginning of June, the Serbian President has been sending warning messages on the „Storm (Operation)“, „Bljesak“, „Exodus,“ „occupation“ and the „hunger“ of Albanians for „taking over“ the North:

Vucic: Passionate desire of Pristina to occupy the North

Vucic: At this moment I do not know what I would suggest to the people, but whatever we do it is a referendum

Vucic: We are ready for a compromise, but we will not allow a new Operation Storm, a new exodus

Vucic: The only thing Albanians are interested in is how to occupy the North

Serbia’s Vucic worries about support for Albanians, fears they „would take some other measures, at some point“