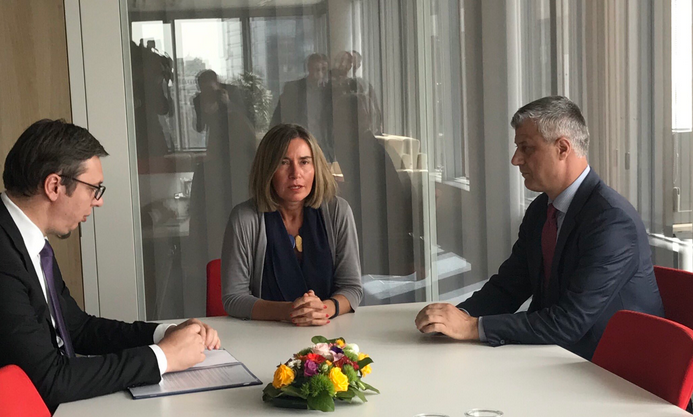 The Presidents of Serbia and Kosovo, Aleksandar Vucic and Hasim Thaci, resumed the dialogue in Brussels, after a three-month break. We publish the messages of the separate addresses of Vucic and Thaci below.

Today (Sunday), we have achieved „several things“ that are „above all, very important for Serbs in Kosovo,“ the Serbian President said.

The Serbian President will not sign, citizens will have a say

„I will certainly address the nation in the coming days on the national television, and probably for the first time, without a question or an answer, but looking directly in the camera. When I see if we have a chance to make some kind of compromise or solution that I will not sign, but I will show it to the people, and they will decide whether they want it or not. No one should be afraid of autocracy, of making decisions without the support of the people. If that’s possible. Today, this does not seem possible to me, „Vucic said, adding that „he and others will be working hard“.

The President repeated his previous messages on „taking“ and „occupying“ the North.

Vucic to Brussels: If you think there is a beating that will make me listen to Thaci, Hoti and such nonsense, do not call me

Vulin again: Demarcation with „Greater Albania“ in Kosovo is the solution

Belgrade media: „Vucic exposed to brutal threats by the West over Kosovo, will break him by releasing fabricated information involving his brother“

Vucic and Cepurin on the „situation in the North of Kosovo“

Belgrade-based Vecernje Novosti writes: „The Albanians plan to cut off the north with the help of NATO“

„Because the question will arise – what if somebody starts occupying North Kosovo during the summer? What would our answer be? Would it be to respond with force, or a second Operation Storm („Oluja“), as the one we had in the past? Serbia’s policy must be more responsible than its politics from the 1990s and 2000s, we have to keep our people in their homes, but at the same time we must not allow them to suffer the same tragedy as they did in the past,“ the Serbian President said.

However, whether he discussed the „occupation“ of North and „Operation Storm“ with his Kosovo counterpart and the High Representative, he did not specify.

Discussions on „attempting“ to focus on dialogue

„At least we have provided peace for our people, so no one will be killed. I think that is an enormous and important achievement,“ he added.

„On the other hand, we also talked about the attempt to focus on dialogue, to show the respect nations have toward each other, people toward people, to show that we can talk and solve outstanding problems. Today, we have openly discussed many issues. I am not an optimist, but we have addressed those issues, which I think are very important,“ the President of the Republic of Serbia added when speaking about the dialogue.

Nevertheless, he refused to get into details about this, because, as he explained, it could „ruin“ the positions of Belgrade and Pristina.

A need for a „rational“ solution, the President will continue to work regardless of „shills and phonies“

“We want to try to continue the talks and find a solution,” he said.

„We have to find a rational solution, which suits Serbian citizens, but one which will show respect to the other side. And so I will continue to work, regardless of all those shills, all those phonies who have never done anything, who only focus on what might offend them. They don’t care if someone is struggling, but it is our job to preserve peace and to find the best possible solution and to extract something from the nothing that is left to us. And that’s what we did today, that’s what we will do in the future.“

When asked about the deadlines for reaching an agreement, Vucic said that this was „not a question of deadlines, but of world interests,“ and reiterated that large compromises require the participation of great powers.

Thaci: Difficult, but a positive tone

„This was a difficult meeting, it was not easy, but it had a positive tone. We looked at the future of both countries. We agreed that the process should have a new dynamic and intensify in the coming weeks,“ Hashim Thaci said.

„We should not be victims or hostages of our bitter past, but we should look forward to the future.“

„Today, in Kosovo and Serbia, patriotism is not looking at the past and crying over it, patriotism is working together towards the future, an agreement, and reconciliation.“

„We also concluded that reaching an agreement towards normalized relations and full peace is in the interests of countries and peace in the Western Balkans“; „Today we talked about how we could reach a general framework for this agreement, which would be acceptable for the people of Kosovo and Serbia, so that both nations could look towards a European future,“ he added.

Thaci expressed a hope that an agreement will be reached, and if not,  „[I] will remain committed to working together in a peaceful, respectful manner, in order to achieve peace between the two countries.“

Otherwise: „We will harm our European future, it will last longer and the countries will remain isolated.“

„This dialogue has surpassed relations between Serbs and Albanians, it is already an issue for the EU and standards,“ Thaci said, adding that he was „aware that this has been a centuries-long conflict and a very delicate situation between the two nations“, but that the past is imposing good neighborly relations.

„I am convinced that we have real momentum and the right leadership to achieve this, otherwise we will end up paying a very high price,“ he added.