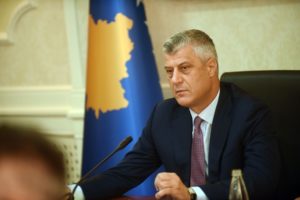 As the President of the state, I urge citizens and institutions to refrain from any kind of provocation and preserve peace at this very important moment for our country. We are committed to maintaining peace and in no way will we endanger the goal of comprehensive normalization of relations. Kosovo institutions are committed to completing work on the drafting of the statute of the Association of Serb Municipalities – the Kosovo President Hashim Thaci said today in a statement. The deadline for the completion of drafting the ASM statute expires today.

Thaci’s messages followed yesterday’s tensions and alarming announcements by certain Belgrade media and tabloids on a new operation „Storm“ and the Gazivode “takeover”, as well as an open letter from the Serbian President to Kosovo Serbs, in which he said that there will be no new Operation Storm. He has been warning about a ‘Storm’ for the last number of months. For that reason, an emergency session of the National Security Council was held today in Belgrade. The Serbian President met with the Serbian Patriarch Irinej also. We publish the original statement of the Kosovo President:

„The Republic of Kosovo is committed to achieving a historic, legally binding agreement in the final stage of the dialogue on the normalization of relations between Kosovo and Serbia.

During this journey, it is necessary to ensure lasting peace in the Western Balkans, the Republic of Kosovo will strictly abide by the obligations of maintaining peace and will not, in any way, endanger the goal of comprehensive normalization of relations between the two countries.

After the founding of the Management Team, the Kosovo institutions are committed to finalizing the work on the drafting of the Statute of the Association of Municipalities with the Serbian majority in Kosovo, based on the 2013 and 2015 agreement in Brussels between Kosovo and Serbia and based on the decision of the Constitutional Court of the Republic of Kosovo.

Therefore, as the President of the state, I urge all citizens, institutions and parties involved in this process to refrain from any kind of provocation and preserve peace at a very important moment for our country.“

What happened yesterday and what messages Serbs and the public received from Belgrade, Pristina, representatives of the Serbian Orthodox Church in Kosovo, and the international community, read in the news:

Kosovo Police: We are not involved in „scenarios“, information unfounded and harmful

Thaci: If we reach an agreement, the Presevo Valley will join Kosovo, the EU, NATO nor US can prevent us

Vucic: Idle talk, nothing happened, God willing, nothing will happen

Bishop Teodosije’s appeal against the partition and demarcation: The international community should not allow an exodus