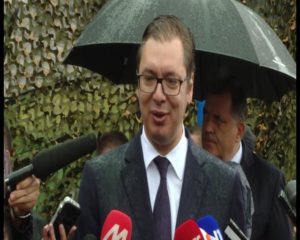 „We are not threatening anyone, we are always ready for compromises, dialogue, and peace. We are not ready, I repeat, and we will never accept a new Operation Storm, nor are we ready for a new exodus and crime against Serbs. We will not allow this to anyone,“ today the Serbian President Aleksandar Vucic spoke again about Operation Storm and the exodus of Serbs, in his statement after a joint military-police exercise, “Joint Strike 2018”, in Kraljevo.

„This is exactly what we are witnessing today – our reaction in the event of an attack on our country and our people. Our faith in our ability to defend ourselves and stop anyone who thinks that today problems should be solved with violence,“ added the Serbian President.

While addressing the media, the Serbian President responded to the journalists’ question whether we can expect a referendum or elections or both.

„A referendum or national decision-making, the decision will be made when the people have something to decide. At this moment I do not know what that could possibly be,“ the Serbian President replied, adding:

„Surely, if something seems like a compromise solution to me at the moment, which would mean a better future for the citizens of Serbia, for our people in Kosovo and so on. If not, then it is all pointless, because at the moment we are not even close to it.“

I will go before the people and state my proposal, I will not hide, and the people will make the decision

When asked about the opposition’s assessment that the Serbian President would „hide“ behind a referendum, the President replied that he did not hide when salaries and pensions were reduced and when they were increased, he then added:

“At the same time, when we are talking about the subject of Kosovo, do you want me to be silent when someone destroys our crosses in churches, when someone declares independence, to boast when an international court rules, based on my initiative, that the secession of Kosovo from Serbia was legal? I will not do it. I will tell the people, I have nothing to laugh about. There is nothing good about Kosovo that we can either get or offer to the people, only problems, and difficulties. I will go before the people with every problem and difficulty and state my proposal. I will not hide at all, and people will make decisions about their future. „

Today’s message is just one of many that the Serbian President has sent in the past weeks about Operation Storm, the „taking“ and „occupation“ of North Kosovo. He sent a similar message on Sunday, after his talks with Kosovo President Hashim Thaci, as part of the dialogue to normalize relations with Pristina.

At the same time, some Belgrade newspapers and media have released a series of articles on „the occupation of the North“, and the „intrusion into the North“ by Kosovo-Albanian troops, with the support of NATO units and the US.

Vucic to Brussels: If you think there is a beating that will make me listen to Thaci, Hoti and such nonsense, do not call me

Vulin again: Demarcation with „Greater Albania“ in Kosovo is the solution

Belgrade media: „Vucic exposed to brutal threats by the West over Kosovo, will break him by releasing fabricated information involving his brother“

Vucic and Cepurin on the „situation in the North of Kosovo“

Belgrade-based Vecernje Novosti writes: „The Albanians plan to cut off the north with the help of NATO“