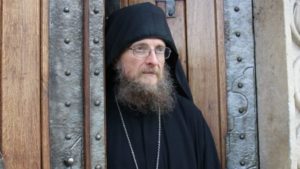 Suspending the construction of the highway Decani-Plav through the Special Protective Zone is an encouraging sign by the Kosovo government and the municipality, the Abbot of the Visoki Decani monastery, Sava Janjic said after the Kosovo government announced yesterday, following a meeting of the Prime Minister, Avdullah Hoti and Decani mayor, Bashkim Ramosaj, that the roadworks are suspended until a joint solution is found.

The suspension of construction is an “encouraging sign by the Kosovo government and the municipality which indicates that there is a possibility to go back to the bypass road project approved by the government in 2014, avoiding the Monastery area,” Janjic tweeted.

The US ambassador to Pristina, Philip Kosnett welcomed the Kosovo government’s decision to suspend works on the Decane-Plav road.

“Construction of the Decan-Plave highway is about more than land and access. It is about upholding court decisions, respecting and preserving the rights of all to practice their faith and live peacefully with their neighbors, and valuing Kosovo’s rich heritage and cultural diversity,” Kosnett said.

Kosnett is also the first international official in Kosovo to comment on the latest developments regarding the construction of this road since last week when the Diocese of Raska and Prizren warned the public, as well as international representatives, that works continued again in the Special Protective Zone near the monastery.

In the meantime, the Decani mayor, Bashkim Ramosaj reacted again, after meeting with Hoti, and announced a meeting with all ambassadors for August 27th, underlining that the road will be built.

“I am convinced that the result will be the right solution for Decani. It will happen or I will make it happen,“ Ramosaj wrote on Facebook.

Along with the message, Ramosaj also published a photo of the works on the Decane-Plav road.

The Diocese of Raska and Prizren announced last week that, despite the ban on the construction of highways and transit roads through special protective zones in Kosovo, works continued on the Decane-Plav highway near the monastery Visoki Decani.
The Prime Minister of Kosovo, Avdullah Hoti ordered the works to be suspended during the weekend. The next day, the mayor of Decani, Bashkim Ramosaj sent a 15-point letter to Kosovo officials, asking them to resolve the „catastrophic situation“ in Decani. According to Ramosaj, four documents are the cause of the problem – including the Law on Special Protective Zones, which refer mainly to Serb monasteries, and the decision of the Constitutional Court to return 24 ha of land to the monastery. This decision of the Constitutional Court, however, has not been implemented.

Abbot Sava Janjic has been repeatedly underlining for days now that the monastery does not oppose the construction of the road, but its route within the SPZ. Janjic also recalled the 2014 decision to build a bypass, which was abandoned the same year.