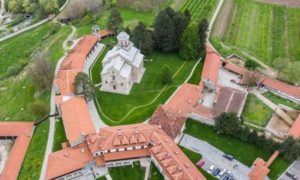 Edited and translated by Kossev

The construction of the Decane-Plav road within the special protective zone in Decani has caused great problems, Pristina-based Gazeta Express reports.

The road construction was suspended at the request of the Prime Minister, following an appeal by the Visoki Decani monastery.

Such protective zones, however, do not exist only in Decani, this portal writes, noting that the Gracanica monastery – located just 10 km from Pristina – also shares the same rights.

According to the Gazeta Express, there are 42 similar sites throughout Kosovo, most of which are monasteries and Orthodox churches, which are all protected by the Law on Special Protective Zones.

Hajrullah Ceku, a member of the Self-determination movement, believes that those areas pose a constant threat to the country, Gazeta Express writes.

A fellow Self-determination member, Demhasaj criticized the behavior of the SOC and the Kosovo Prime Minister Avdullah Hoti for suspending the construction of the Decane-Plav road, at the request of Serbian President Aleksandar Vucic – this portal also reported.

According to this Pristina media outlet, Kosovan civil society also believes that Serbs will seek greater authorities for these religious and cultural sites in the dialogue process – at the next meeting scheduled for September.