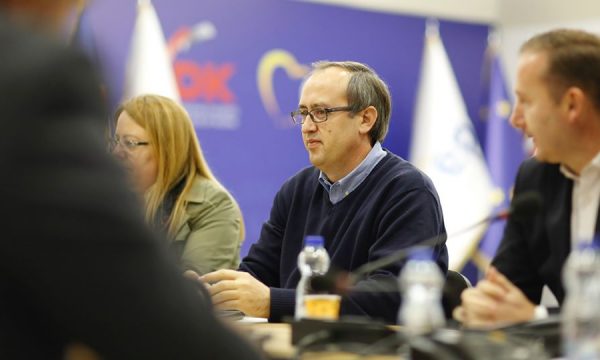 The Kosovo Prime Minister, Avdullah Hoti requested the suspension of the works on the Decani-Plav road – the section of the road that especially affects the protective zone of the Visoki Decani Monastery, the office of the Kosovo Prime Minister officially announced today. „We have never been against the Decani-Plav road, but the problem has always revolved around the construction of that road through the protective zone,“ Abbot Sava Janjic responded last night to the accusations that the monastery is preventing the economic development of the Decani municipality.

The Diocese of Raska and Prizren announced on Thursday that, despite the ban on the construction of highways and transit roads through special protective zones in Kosovo, works on the main road Decani-Plav near the monastery Visoki Decani have continued. The construction works are being carried out by the Kosovo local authorities in Decani, together with the support of the Pristina authorities. The Decani clergy have been opposing the construction of the road passing through the protective zone for the last six years. The Diocese of Raska and Prizren once again sent an appeal to international representatives and official Belgrade.

„The legislation adopted by the Assembly of the Republic of Kosovo must be respected, as well as the decision of the Constitutional Court of Kosovo,“ the Pristina government wrote in a statement, emphasizing that Hoti also „appreciates the vital importance this road has for citizens.”

“Understanding the direct impact of this road on the economy and quality of life of the inhabitants of the municipality of Decani, Prime Minister Hoti supports assessments of all legal and practical possibilities on the ground to complete this road that connects the Republic of Kosovo and the Republic of Montenegro.”

Furthermore, in today’s statement, Hoti also emphasized „the full commitment of the government and the people of Kosovo to preserve and respect sacred objects as a common value of the rich spiritual heritage of the Republic of Kosovo.“

The mayor of Decani, Bashkim Ramosaj announced yesterday that the works were suspended until Monday, but at the request of the Prime Minister of Kosovo. However, he revealed that it was a temporary suspension, noting that Sunday was a „non-working day“.

Ramosaj came out with this information after Pristina media reported that construction of the Decani-Plav road had been stopped by KFOR.

„After noticing false news on various portals, I would like to inform you that at the request of Prime Minister, Mr. Avdullah Hoti, we suspended works on the R-108 road until the beginning of next week. Tomorrow is Sunday, a non-working day! We will continue on Monday,“ Ramosaj said.

Previously, he announced that he would not give up on the road construction. At the same time, he used a derogatory reference for the abbot of Visoki Decani, describing him as “crazy” – although he did not use the abbot’s name.

Abbot Sava: We have never been against the Decani-Plav road, but the problem always revolved around the construction of that road through the protective zone

Abbot Sava Janjic did not want to address the comments of the mayor of Decani, saying that he „does not intend to stoop to using street language.“ The Abbot, however, reacted once again in order to interpret the actions of the municipal leadership.

While stressing that „some do not seem to read their own laws“, the Abbot underlined:

„The law on special protective zones was adopted by the Kosovo Assembly, and it clearly indicates what is allowed and what is not allowed within protective zones. What is forbidden without discussion, and what can be discussed. Transit routes, i.e. highways through uninhabited parts of the protected zone are prohibited.“

Even if the monastery supported the construction of the road through the protective zone, it would be illegal, the Abbot reiterated, reminding of the multi-member Commission for Protective Zones, in which Bishop Teodosije is only one of the members.

„After all, we have never been against the Decani-Plav road. The problem always revolved around the construction of that road through the protective zone, which is prohibited according to the law and legal analysis of the law by the OSCE and the EU Mission. If we want to respect the laws, it simply cannot be discussed.“

The decision on this matter was made at the Council for the implementation of protective zones in Pristina, and the municipality did not implement it, the Abbot noted.

The Implementation Council, as well as international representatives, proposed the construction of a bypass around the protective zone as the only solution to this problem. The works on the bypass started in 2014 as per the decision of the then Prime Minister Thaci, but its construction was soon stopped.

In the meantime, KFOR Commander Michele Risi also visited Decani and the SPZ on Saturday.