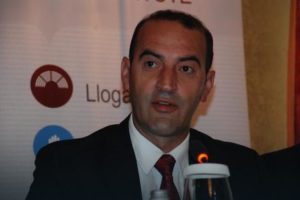 „President, you were called to work, not to arrange meetings at meetings. The road should be finished, President, that is our right and a good thing for the monastery as well,” Daut Haradinaj, Ramush Haradinaj’s brother and an MP, told his fellow citizen and party colleague, Decani mayor, Bashkim Ramosaj.

The mayor of Decani previously addressed the public to announce that yesterday’s meeting with Kosovo Prime Minister Avdullah Hoti is the beginning of a series „intense“ meetings until August 27th, when he will meet with „all ambassadors“.

Ramosaj’s announcement arrived after the Kosovo government revealed, after a meeting between Ramosaj and Hoti, that the works on the construction of the Decane-Plav highway were formally confirmed as suspended until a solution was found by „all parties“, which was immediately welcomed by the US. Ambassador Philip Kosnett.

„It will happen or I will make it happen,“ the mayor of Decani still claimed, who has been repeatedly stressing that he will not give up the construction of this road that passes through the SPZ, which Decani monks are strongly objecting to. The road in question is the reason tensions have been high since last Thursday when the Diocese of Raska and Prizren warned the public and international representatives of the continuation of works.

According to Pristina-based Koha, after the previous dissatisfaction expressed by the AAK due to the dialogue and with Serb soldiers passing through Karacevo, which are still described as the „Serbian gendarmerie“, the construction of the Decane-Plav road could be the reason for the collapse of the ruling coalition.

Haradinaj and Ramosaj are members of the same party – AAK led by Ramush Haradinaj. A meeting between the partners in the ruling coalition will be held today, attended by party leaders in the current coalition – Ramush Haradinaj, Isa Mustafa, Fatmir Limaj and Avdullah Hoti.