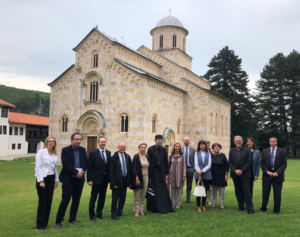 „Sad to see the slanderous attacks on Father Sava,” US Ambassador to Pristina, Greg Delawie tweeted yesterday. This message followed headlines in Kosovo media in which the Abbot of Visoki Decani was associated with the „war criminal“ Zeljko Raznatovic Arkan in Pristina. The media also published a video of Arkan, but not with Sava Janjic.

The day before the arrival of the diplomats to Decani monastery, RTK published an article stating that the Abbot of Visoki Decani monastery sent a letter to the diplomatic corps in Pristina with an alleged request to „stop the construction“ of the Decani-Plav road.

„It is well known that the Serbian Church has a great influence on Serbian politics. This is not the first time that projects of capital development were made difficult by Serbian structures, both political and religious. It is surprising that foreign diplomats responded to the letter from the Abbot Janjic, because this is a road project that connects people to each other and affects the economic and social development of both countries, Kosovo and Montenegro,“ RTK reported.

A day before, the top officials of Srpska Lista, Ministers and Deputies from the Kosovo government and the parliament criticized the clergy of the Serbian Orthodox Church in Kosovo – from Belgrade television studios. They also criticized the appeal of Bishop Teodosije against the partition and exchange of territories in Kosovo, and warnings that such a solution would lead to an exodus of Kosovo Serbs.

However, the construction was not stopped, but a delegation of EU ambassadors led by the Head of the EU Office in Kosovo, Natalya Apostolova, visited the construction site and the Visoki Decani monastery.

As the Kosovo Ministry of Infrastructure announced, they visited the construction site accompanied by and on the invitation of Kosovo Minister Pal Lekaj.

Apostolova emphasized the need to respect the implementation of the Law on Special Protective Zones, including the Decani monastery, which is also under UNESCO protection.

„Implementation of the Law on Special Protective Zones is imperative for Kosovo to demonstrate respect for rule of law and its international commitments: any action in the Decani monastery Zone must be in line with the law,” the head of OSCE Mission in Kosovo, Jan Braathu said during the visit, which was retweeted by Apostolova.

According to diplomats, they visited the protected zone with members of the Implementation and Monitoring Council, in order to „learn at first hand, the latest road construction developments in that area“.

Apostolova thanked the Kosovo Minister of Infrastructure Pal Lekaj and Minister of Environment and Spatial Planning Albena Reshitaj for their efforts to facilitate and join the visit.

„During the visit to the Special Protected Zone of Decani, the monastery and road construction site, with the Council for Implementation and Monitoring and the European Ambassadors, we appreciate Pal Lekaj’s and Albena Reshitaj’s pledge to respect the law, protect the heritage and rights of Kosovo communities. And Sava Janjic for the dedication to preserve multi-ethnic Kosovo as richness for all,“ Apostolova tweeted.

The delegation, apart from Apostolova and Braathu, was composed of the Ambassadors of the Netherlands, Austria, Italy, Greece, Slovakia and Finland.

The details of the visit were announced by the Abbot Sava Janjic:

„Head of the EU office in Kosovo Nataliya Apostolova with several EU Ambassadors and diplomats visited today the local road in the vicinity of Visoki Decani Monastery where the Kosovo Government had announced the construction of an international transit road towards Montenegro. Mrs. Apostolova and the head of OSCE Office in Kosovo Mr. Jan Braathu clearly explained that the Kosovo law on Special Protective Zones is clear and must be respected and that a transit road cannot be built in such zones, especially not in the vicinity of a UNESCO monument. Kosovo Minister of Infrastructure Mr. Pal Lekaj said in front of many journalists that there will be no construction of the road towards Plav (Montenegro) through the Special Protective Zone of Visoki Decani Monastery. Let’s hope it will be so.“

In May, international diplomats also reacted when they requested the termination of the works on the construction of the road to Plav, which were being carried out, as the Raska-Prizren eparchy claimed, within the protected zone and, for which, a termination was also requested.

Controversial information arrived from the Kosovo side, starting with information that a new road is not being constructed, but that the existing mountainous area is being cleared due to erosion and landslides; it was guaranteed that there will be no entry into this protected zone without prior permission, that is, the works are being carried out without disturbing the protected zone; the Government of Kosovo has allocated €12 million for continuing the construction of a road that started four years ago and that the road is being built, while the construction will not be stopped.