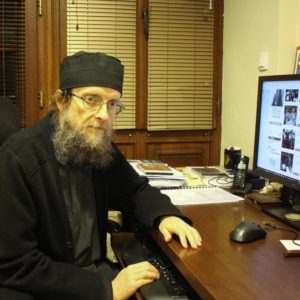 International representatives are making efforts to suspend the construction of the Decani-Plav road, following a Thursday night appeal by the Diocese of Raska and Prizren to stop the latest works within – as the Diocese has been saying for six years – the Special Protective Zone around the monastery of Visoki Decani.

The abbot of the Visoki Decani monastery, Sava Janjic confirmed for RTS on Friday that the Serbian clergy is actively endeavoring to once again stop the work of excavators and other heavy machinery.

At the same time, he expressed the expectation that international and Serbian representatives in Belgrade would inform the authorities in the international community about the endangerment of the zone around the monastery under UNESCO protection.

On Friday, the Serbian Ministry of Culture and Information condemned the continuation of works on the main road Decani-Plav, but also urgently informed UNESCO about the matter. Notes from Belgrade were sent to UNESCO Director-General Audrey Azoulay, Assistant Director-General of Culture Ernesto Ottone and Director of the UNESCO World Heritage Center Mechtild Rossler, urging them to „react immediately and protect the cultural heritage site that is part of the UNESCO World Heritage List”.

The law has been violated and the works on the Decani-Plav road must be halted, Sava Janjic said last night.

He recalled the Law on Special Protective Zones, which includes the zone around the monastery, emphasizing that local structures in the municipality of Decani are violating their own laws.

Decisions on construction can be made only with the consent of the multi-member Commission for Protective Zones, whose members are representatives of the EU Office in Kosovo, the OSCE Mission, Kosovo’s Ministers of Spatial Planning and Culture, and the Bishop of Raska and Prizren. In the case of the main road between Decani-Plav, the Commission did not give consent for the construction of the road, instead a bypass route around the SPZ had been agreed.

„Even if the monastery consented to the construction of that road, it could not be built. The law has been violated and the works must be stopped and if the road from Decani – Plav is constructed, a bypass must be built, which was started in 2014. Later, however, works continued within the protective zone, which is directly prohibited and not allowed,” said the abbot.

Breach of trust, the stance on Serbs and churches is not changing

Abbot Sava described the fact that, according to the clergy, the local authorities, with the support of institutions from Pristina, continue with the works within the SPZ, as inappropriate behavior towards the monastery of Visoki Decani. He noted that the monks always tried to maintain good relations with their neighbors, and international representatives as well.

The natural environment is being hurt and the monastery from the 14th century is being directly damaged, he also said.

He also warned that instead of working on improving relations, trust is being significantly „breached”.

Sava Janjic also spoke about Bishop Teodosije being recently turned back from the Jarinje crossing. As he said, the head of customs in that shift, whose name he revealed, treated the bishop condescendingly and the customs officer prevented him from entering Kosovo because he had two buckets of honey and personal luggage in the trunk of his car.

The Abbot recalled that, although the value of these goods did not exceed 150 euros, which were a gift for the Gracanica monastery, the bishop was „humiliated“ and forced to return and leave the honey, then return to the crossing where his car was searched again.
„This sort of behavior towards the Orthodox bishop has not been seen in Kosovo for the last 20 years,“ he said.

„This indicates that the attitude towards Serbs and the Serbian Orthodox Church is not changing, despite the existing laws and some official assurances. We see that these same laws are being violated, we see that court decisions are not respected. Simply, every opportunity is used to make our lives more complicated and difficult,“ the abbot emphasized.

At present, heavy machinery (excavators, backhoe loaders, and road compactors) are operating within the Monastery’s Protective Zone, the Diocese announced on Thursday night. The road is being widened by several meters from its previous width, thus becoming essentially a category one highway, they added.

A section of this road was ceremoniously opened in June this year. The ceremony was attended by Kosovo Prime Minister Avdullah Hoti and former Prime Minister Ramush Haradinaj, who was born in Decani. Haradinaj was the prime minister when the first attempt was made to build the road in 2018, within – as the monks of Visoki Decani claimed even at that time – the Special Protective Zone. This move was opposed by the Visoki Decani monks and representatives of the international community in Kosovo and Serb CSOs.

The road construction began in 2014, and all attempts by the Diocese to halt the works while alerting of a violation of the Law and the SPZ were rejected by the authorities in Decani, who accused Visoki Decani of „preventing economic development“ of the municipality of Decani.