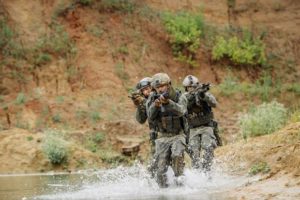 „NOVOSTI REVEALS AMERICA IS PREPARING THE ALBANIANS: They fast-tracked the training to strike against the north of Kosovo“ – reads a new headline of the prestigious Belgrade daily newspaper Vecernje Novosti. In late May and early June, the same newspaper reported that „The Albanians plan to cut off the north with the help of NATO“ and „Thaci with America and ‘Golden Saber’ takes over the north of Kosovo and Metohija“. These headlines were followed by a series of media and political warnings about „occupation,“ „taking over,“ „intrusion into“ the North, and Operation Storm. We publish the latest text of the Belgrade-based newspaper in its entirety:

„KOSOVO Albanians are rapidly intensifying exercises with Americans, under a joint operation under the code name ‘Golden Saber’, which is interpreted in security circles as the final phase of the occupation of the north of Kosovo and Metohija and rounding up the ‘sovereignty’ of a false state – Novosti reports.

According to our information, members of American KFOR have been training members of the Kosovo Security Forces for the future ‘Kosovo Army’ on Bajgora Mountain for weeks. Our sources claim that training is been conducted for at least a hundred members of the KSF, who are periodically rotated on Bajgora.

This mountain, located on the outskirts of the Podujevo municipality and extending to the north, toward Kosovska Mitrovica, was one of the largest strongholds of the so-called KLA, where many terrorist actions were once planned and carried out. The headquarters of the so-called KLA group from the region of Lab, which committed numerous kidnappings, and also killings of Serbs in the Podujevo municipality, as well as on the highway towards Vucitrn and Kosovska Mitrovica, were also located on Bajgora.

This disturbing security information arrives at a moment of increased tensions in Kosovo and more frequent speculations that Pristina is just waiting for a trigger for action which will start the occupation of northern Kosovo. Within this, a story has been released that Serbs will unilaterally form the Association of Serb Municipalities, which should serve as an alibi to the Kosovo Albanian leaders for an incursion into Serb-majority municipalities and to round up their ‘independence’ throughout the territory of KiM.

Although US representatives in Kosovo have publicly pointed out that constitutional changes and a comprehensive dialogue of all communities in Kosovo and Metohija are necessary for the transformation of the Kosovo Security Forces into the ‘Kosovo Army’, the behavior of American KFOR members in the field indicates that these processes are well underway. According to unofficial but reliable information obtained by our newspaper, in addition to training the KSF members, they are also heavily arming these forces, i.e. the future ‘Kosovo Army’.

– The KSF command bought 27 ‘Humvee’ military vehicles from the Americans, while they received 24 as a gift – a source revealed for Novosti.

According to available data, KSF possesses automatic rifles, grenade launchers, small armored vehicles, and, according to announcements, the acquisition of helicopters could soon follow because Pristina-based institutions allocated €40 million from the budget for the purchase of armaments. At the end of last year, the Albanians even ordered 12,000 pieces of ‘Armbrust’ German-made light rocket launchers.

Pristina already has a developed plan, according to which the ‘Kosovo Army’ should have 8,000 members, of which 3,000 would be in reserve, and full operability should be achieved by the end of 2019.

After the information that the KSF is first preparing to take over the strategically important hydroelectric power plant at Gazivode and the Valac power station, followed by the mass transfer of KFOR troops from the south of Kosovo to the north on Saturday morning, the Serbian Armed Forces preventively raised combat readiness on the entire territory of the country. The Ministry of Defense announced yesterday that, as part of the regular flight training, the Army air force will be flying over the area of Nis and the south of Serbia starting from today and continuing for the next five days.

Two-hour state-of-the-nation consultations were held at the National Security Council session, where appropriate decisions and measures were adopted for Serbia to prepare for all challenges. President Aleksandar Vucic said that our country will do everything, and at any cost, to preserve the peace.

According to the latest information, the majority of KFOR members, who were deployed around Gazivode HPP on Saturday morning, pulled out yesterday. Only two vehicles with several armed soldiers remained stationed at the plant entrance.

The Minister of the Provisional Institutions in Pristina, Rustem Berisha, stated that 51 KSF members of Serb ethnicity want to leave the organisation, which shows that the number of Serb members who intend to leave this formation is growing. During research, we have discovered that the KSF abandonment procedure lasts a minimum of six months.

The President of the Parliamentary Committee for Kosovo and Metohija Milovan Drecun spoke to Novosti, and warned that the security situation in Kosovo is unstable at multiple layers and that Pristina’s intentions to complete ethnic cleansing and round up on the idea of a ‘Greater Albania’ with Tirana are becoming more obvious:

– The clear intention of Pristina to form its own army is like pouring oil on fire, it will only raise tensions throughout the region.“