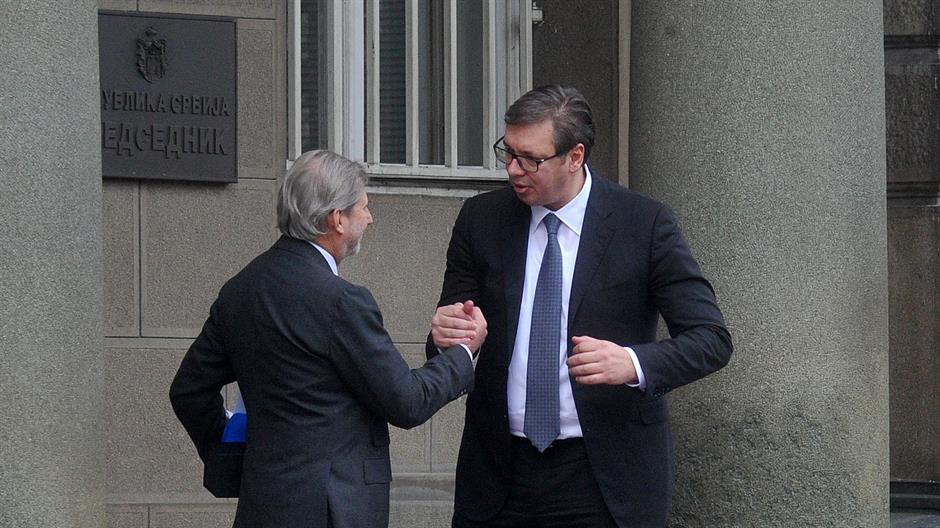 “Bad news comes from Kosovo” – the Serbian President, Aleksandar Vucic announced to the public on Monday evening. “The Kosovo government does not plan to abolish taxes on Serbian products, and the Assembly will form an army later this week,” the president warned, adding that „the only thing left for them to do is to bring us down on the streets and they will have no other problem.“ According to Vucic, all Serbia can do now is: „Draw attention to the extent of the catastrophe which will happen if someone does not stop Pristina, in the shortest time possible, in trampling over the Serbian people who won’t move out of Kosovo and Metohija.“ He also announced a huge gathering of Serbs today.

Serbia will not recognize Kosovo’s independence because of taxes

„What the bad news is and as the President of the Republic, I am very worried about is the fact that Albanian authorities in Kosovo and Metohija do not want to hear about the abolition of unlawfully imposed taxes against the Republic of Serbia and BiH, but I can only speak on behalf of Serbia,“President Vucic conveyed the response the EU Commissioner Hahn received in Pristina.

They told Johannes Hahn that these taxes will remain until Serbia recognizes Kosovo’s independence – the President explained, emphasizing that Serbia does not speak the language of blackmail.

Serbia cannot prevent the formation of the Kosovo army, but it can draw attention to the extent of the catastrophe which will follow

The President also said that he is worried about the announcement that Kosovo will form an army on December 14th, which will lead the region „to a fait accompli„.

„The second news is even worse than the first, which is that the Albanians announced today that they will form their army on December 14th. They played with dates. They said: Here we are not going to do it on the Flag Day, but we’ll do it fifteen days later. They want to form the Kosovo army, contrary to their Constitution, contrary to all agreements we have with NATO and, I would say,which actually oppose them – at least according to the publicly proclaimed desires of great powers. This brings our region to the highest level of danger so far, and these moves by the Albanian leadership are very irresponsible, I would say frivolous, but unfortunately, very serious, but terribly irresponsible and they are leading us to the greatest danger. I do not even want to say that word – what is their intention and what is their desire, but I am afraid that they will lead us to a fait accompli,“ Vucic said.

The President underlined that Serbia cannot do much about the formation of the Kosovo army, except to warn the international community and try to schedule a session of the UN Security Council. Vucic stressed, however, that he cannot guarantee it, but that Serbia will do everything to „draw attention to the extent of the catastrophe which will follow“.

„The problem is what we will do on the 15th of December, or on January 15th or February 15th when one of the hotheads in Pristina decides to send an army to the north of Kosovo, contrary to the agreement we have in Brussels and NATO and with the European Union. That is the question that we want to get a response to from the entire world, both Europe and the world, and tomorrow I will consult with Russian and Chinese representatives. I suppose I will talk with the Americans and then we will decide whether we will request a Security Council meeting. Not because we expect anything from it, not because we even expect the Security Council session to be scheduled, but because we want to do our thing, to warn the world and tell the world what is going on and what is in front of us. Let us draw their attention to the extent of the catastrophe which will follow unless someone stops Pristina in the shortest time possible,“ Vucic warned.

The President also believes that these two moves by the Kosovo authorities prove that Belgrade was lonely in its goal to reach a compromise solution.

When asked what Serbs should do after Pristina’s decision not to abolish the increase in customs duties, as well as their decision to resign – „whether they should return or remain (in Kosovo institutions)“, the President replied:

„Now that you are already putting words in my mouth,I tried to tell them during one meeting that they may have been too hasty. The people rejected me completely. Marko was present. Nikola, you were at the meeting, I think. None of them will be part of any Pristina institution. Can you forbid Stevan Vulovic from saying – I shut down the Kosovo institutions from Zubin Potok, when he is the happiest because of that!“

The President confirmed that the Serbs are being kept in Kosovo institutions by force.

„How do you interpret that everyone from the opposition and most of the opposition media, somehow -without evidence, are pointing their fingers at Milan Radoicic, saying that he is a killer and accusing you of violating the presumption of innocence, and in fact, they are doing that the entire time?“ – Pink TV journalist, Goca Uzelac asked Vucic.

„I listen to it every day. All of these accusations, since I know that they are undergoing a great deal of preparation to explain it. So they know that the killer is Milan Radoicic. We wonder how you know that. And why are you violating the presumption of innocence? They are fabricating it as well, lying every day, trying to involve members of his family in every way, and since they cannot include his wife, then let’s turn on others. Yes, we know it is so! If you know, go to the police. Give us a single proof. We will immediately arrest him,“ he replied.