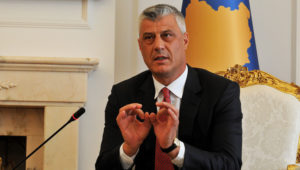 Kosovo President Hashim Thaci has reiterated yesterday that the partition of Kosovo will not happen under any circumstances, but that there will be a correction of the borders with Serbia and that an agreement reached between Belgrade and Pristina cannot be prevented by the EU, NATO, nor the United States, reported Kosovo media.

„As part of the border correction, I emphasize again, under no circumstances, at any price, will anyone be able to impose the realization of Serbia’s aspirations for a partition. While, within the correction of the borders, I believe that the institutionalization of the demands of the Presevo Valley leaders to join Kosovo is possible and acceptable for our side if there is mutual consent or coordination,“ said Thaci.

„No one can and no one will oppose the voluntary agreement of the parties involved in the dialogue, in this case, Kosovo and Serbia. Therefore, not the European Union, NATO, nor the United States,” he added.

„So, I repeat, the partition will not happen under any circumstances; the correction of the border could include the Presevo Valley,” Thaci concluded.

Thaci did not provide an opportunity for KTV journalists to ask questions.