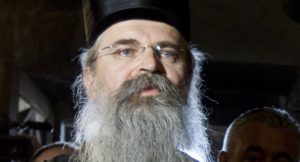 As a Serbian Orthodox Bishop of Raska-Prizren, the Diocese which comprises the area of Kosovo, Metohija and Raska regions, I find it necessary to express my deepest disappointment with the absence of any constructive reaction and compromise from the Kosovo institutions on the occasion of the 5th anniversary of their refusal to implement the decision of the Constitutional Court of Kosovo which recognized the land of Visoki Decani Monastery, Bishop Teodosije said.

While pointing out that the heads of the EU and OSCE missions in Pristina, as well as the leading Ambassadors of the US, France, Italy, Germany, and United Kingdom, have already issued their statements on this issue – reminding the Kosovo institutions of their obligation to respect judicial decisions and the rule of law, Bishop Teodosije underlined that Kosovo leaders have „ignored all criticism.”

“Kosovo leaders sent a letter to UNESCO requesting the removal of 4 UNESCO World Heritage Monuments in Danger (all four Serbian Orthodox sites: Pec Patriarchate, Visoki Decani, Gracanica and the Holy Virgin of Lyevish) from the World Heritage in Danger list under the pretext that the Orthodox Christian heritage in Kosovo is allegedly fully safe.”

The head of the SOC in Kosovo reacted on the occasion of the 5th anniversary of the Kosovo government’s refusal to implement the decision of the Constitutional Court of Kosovo which recognized the land of Visoki Decani Monastery and the latest developments regarding the SOC sites in Kosovo.

Bishop Teodosije recalled that the Minister for Spatial Planning of Kosovo, Liburn Aliu, openly stated that he is against the construction of the bypass road leading to Plav (Montenegro) which would go around the Special protective zone of Decani Monastery.

“In practical terms, this means that Minister Aliu as an ex-officio co-chair of the Implementation Monitoring Council directly rejected the IMC decision which his predecessor together with other members of the IMC and the Decani Mayor signed in November 2020. This is a serious blow to the international community which invested lots of energy in reaching this agreement.”

In this way the Minister is openly calling for the violation of law and construction of a transit road through the Special Protective Zone of Decani Monastery, which seriously complicates the security situation, the Bishop alerts.

“With such irresponsible behavior Kosovo leaders are completely undermining their message to UNESCO. They show that Kosovo institutions are not only unable to protect the Serbian Orthodox Heritage in Kosovo and Metohija but that this heritage must be protected primarily from themselves and their overt violations of laws and court decisions.”

The Serbian Orthodox Church will inform all the relevant international and other institutions about this course of events:

“Because such behavior of the representatives of Pristina institutions constitutes a direct call for legal anarchy and the inflammatory rhetoric they use, denying even the official name of the Serbian Orthodox Church (recognized in Kosovo Constitutions), directly raises ethnic and religious tensions in the region,” the Bishop stressed.

Our Church sees this behavior as one among many examples of violations of our religious and human rights and appeals to international representatives in Kosovo and Metohija to react appropriately and prevent further escalation, he added.

The Bishop also emphasized that the Church remains open for dialogue:

“But only when the decision of the Constitutional Court of Kosovo from 2016 is fully implemented with our land registered and when we return to respecting of the jointly adopted decision of the Implementation Monitoring Council which allows rehabilitation of local roads in the protective zone only with the parallel work on the bypass road around the Special Protective Zone of Visoki Decani Monastery.”

Europa Nostra’s decision to include Visoki Decani on its list of the 7 most endangered monuments for 2021 at the beginning of April triggered an avalanche of negative reactions from Kosovo officials.

Several letters from the highest Kosovo officials have been published on social media and in other media since March, referring first to Europa Nostra on three occasions, after the latter included Visoki Decani on the list of the 7 most endangered European cultural monuments for this year – opposing the decision. They also alleged that Europa Nostra has been deceived.

Kosovo officials also urged UNESCO to remove Visoki Decani and three other SOC monasteries from the list of endangered, to list Kosovo as the responsible state party for them instead of Serbia as it was so far, and accept Kosovo as a member into UNESCO. They boasted that Kosovo cares about the diversity of life and the rights of all.

Finally, they wrote to the National Museum in Belgrade and the Serbian Ministry of Culture – requesting the return of 1,246 museum exhibits to the Pristina Museum. The latter letter reveals that Pristina also sent letters to about 50 other countries.

V.Decani: Respect for the law, religious and ethnic diversity is the main criteria for a mature government, but Kosovo has shown that this is not the case