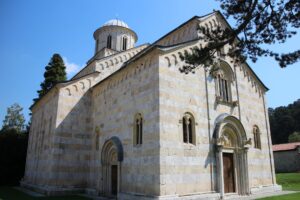 The Kosovo government claims that it can protect our church heritage. In fact, with their disrespect for the decisions of their own court, the law, the situation with ethnic and religious discrimination of four sites of the Serbian Orthodox Church under the protection of UNESCO has never been worse, the Diocese of Raska and Prizren said on Friday.

The monastery of Visoki Decani recalled the Diocese’s words yesterday – a day after top Kosovo officials wrote to UNESCO, urging it to remove this monastery and three other SOC monasteries in Kosovo from its list of endangered and to list Kosovo as the responsible state party for them instead of Serbia as it was so far.

„Respect for court decisions, the rule of law, ethnic and religious diversity, and rights are the main criteria for how mature a government is to take care of cultural heritage. Kosovo has shown that none of that applies as long as it intentionally violates the law, despite international criticism,“ the monastery of Visoki Decani tweeted.

„As the Diocese announced in its statement yesterday, all communication with the Kosovo authorities will be suspended until the rule of law is established and the decision of the Constitutional Court on the Decani Monastery is fully implemented,“ Visoki Decani underlined.

Top Kosovo officials – Albin Kurti, Vjosa Osmani, and Glauk Konjufca sent a letter to UNESCO on Friday. The letter arrived just after the fifth anniversary of the Constitutional Court’s decision to return 24 ha of land to the monastery – when western ambassadors reminded that this decision had not been implemented yet.

The head of the OSCE, Michael Davenport, also visited the monastery on Friday, reminding of the support of this organization to the Serbian Orthodox Church in „preserving its cultural and religious heritage“.