Four out of five Albanians in Albania (79.2%) would vote for the unification of Albania and Kosovo in a referendum, the Albanian Euronews claims, referring to its survey published ahead of today’s joint session of the two governments in Elbasan.

According to this media outlet, only about 16% of Albanians in this country are against unification.

Less than half of Albanians, however, believe that this could come to be in the next decade.

In the event of unification, 70% of Albanians believe Tirana should be the capital.

The vast majority of Albanians (over 90%) also believe that Albania and Kosovo are one nation.

The poll took place between October 20th and October 29th. The survey was conducted by the „MRB“ and „Data Centrum“ agencies at the national level, with 1000 face-to-face interviews, Euronews reports.

Commenting on these findings for the same television station, analyst Ismail Tasholli reminded that according to the Kosovo constitution, unification is „practically impossible“.

Tasholli also stressed that „political elites“ on both sides „do not have a concrete plan for unification.“

„Our elites did not talk about it seriously, except for Branko Merxhani and Arben Xhaferri, the two people who took this topic very seriously. We do not have serious talks, they remain at a cosmetic level and have never been analyzed in a rational context as to how this will come to and what will happen next,“ he said.

Similar surveys were also carried out in the past. Two years ago, Insajderi wrote that 74.8% of Albanians are in favor of unification. This figure was then published on Facebook by journalist Sebastian Zonja, who also announced the presentation of the entire research. He also revealed that it was carried out by CSOs. The research presentation, however, did not take place at the time.

The survey was published ahead of today’s joint session of the Kosovo and Albanian governments in Elbasan, and the Albanian Flag Day. Earlier, Albanian President Ilir Meta paid a visit to Pristina.

Approximately 16 joint agreements are expected to be reached in Elbasan today.

This is the 7th joint session of the two governments. The previous session was held in October last year in Tirana, when 14 agreements were signed.

In the meantime, a common history of Albanians is being written. In two years, in two volumes from „antiquity to the independence of Kosovo“, 15 historians from Kosovo and Albania will prepare a unique history for their people, it was announced earlier this year.

Almost a year ago, a joint Kosovo-Albania energy block was formed. At the same time, KOSTT separated from the power network of Serbia and united with OST, and then they joined ENTSO as a joint bloc.

That was one of Serbia’s obligations undertaken as part of the Brussels agreements.

According to a joint survey conducted last year by the Kosovo Foundation for Open Society (KFOS) and the same subsidiary in Albania (OSFA), no progress has been made in integrating the energy markets of Kosovo and Albania, despite the fact that in the Albanian national strategy for 2018-2030, the integration of the energy market with Kosovo is mentioned a total of 14 times, and in the energy strategy of Kosovo for the 2017-2026 period, the integration of these markets is mentioned 10 times.

When it comes to joint trade agreements between Kosovo and Albania, according to the survey of these two foundations, out of 53 individually defined obligations, to which the two governments have committed through trade agreements, 49% have been fully implemented, 36% partially, there is no data on 6% of them, while 9% have not been fulfilled.

As for trade between Kosovo and Albania, according to data from 2018, 9% of exports from Albania go to Kosovo, and 1% of total imports in Albania come from Kosovo.

On unification: from Kurti through Haradinaj to non-paper and „demarcation“

The threat of territorial unification on ethnic grounds made waves in the region this spring. The idea met the disapproval of international representatives. The Slovenia-based portal „Necenzurisano“ published the content of the alleged non-paper: „Western Balkans – the road ahead,” on the separation of RS and its annexation to Serbia and the unification of Kosovo and Albania.

At that time, the newly elected Kosovan Prime Minister, Albin Kurti, who used the fight against corruption as the backbone of the campaign, made an effort to gain votes in Albania with a branch of his party Self-Determination (LVV).

LVV has publicly and directly advocated for the unification for years, which is perceived in the region as the idea of Greater Albania, on which their program was based. The party also refused to recognize the Kosovo flag.

Although Kurti has become much more cautious since becoming the prime minister, and the program documents of Self-Determination have been „cleansed“ of several determinants on the unification in recent years, the party’s officials and other politicians in Kosovo have continued to speak in favor of – all Albanians living in one country.

This narrative is usually brought to the fore before the elections, or during national holidays. The leader of the AAK, Ramush Haradinaj, used the unification with Albania as the backbone of his campaign last year.

Before taking over the post of Prime Minister at the time, Albin Kurti publicly advocated for the amendment of the first article of the Kosovo Constitution, which stipulates that Kosovo „cannot join another state.“

„We have an obstacle when it comes to the Constitution of the Republic of Kosovo, but it is not an insurmountable obstacle. Through work and commitment, with the political will and the will of the people, we must pass a law on the referendum and change the Constitution of Kosovo one day. Kosovo and Albania, as two states of the same nation, can be integrated and united,“ Kurti said in March this year.

„There is no doubt that Albania and Kosovo – as states, institutions and policies – must be coordinated towards rapprochement, integration and union, primarily in three main areas – the one on energy security and natural resources and the foreign policy of the Albanian nation. The Constitution of Kosovo is in conflict with Article 1.1 and Article 1.3. The latter hinders us from joining another independent state like Albania, but it also represents an obstacle to a different kind of integration, like the European one. In Kosovo, when we have no law on the referendum and we cannot change the Constitution, it shows that we need to do more work and it takes time to achieve that, but there is no doubt the historical intensity and desire of the Albanians.“

Earlier this year, Albin Kurti confirmed for Euronews Albania that he would support the unification of Kosovo and Albania in a referendum. Recently, he reiterated the same claim for a Swiss media outlet. In the meantime, the Serbian president announced that, upon his return from Sochi, he will send leters to the heads of EU countries due to „the lack of reaction from the international community“ to Kurti’s statement.

In a late interview with RTS last night, Vucic did not provide a specific answer to the question about Kurti and the unification of Kosovo and Albania, his intention to write to the heads of European countries, and what message he brought from Putin. He did, however, mention the north and maps.

„We had a friendly chat about it and we understand each other well. I talked about double standards and the not uncommon hypocrisy in international relations, President Putin recognizes that and understands well what I am talking about, but he asked me for additional explanations, so we talked about the north of Kosovo, and showed it to him on the map (…) You know, when you talk for three hours, and it’s just the two of you, you get into all kinds of details. We spoke about our museums, monasteries, churches… We covered all the areas.“

Until recently, the Serbian president himself publicly advocated for demarcation with the Albanians, although never directly sharing details about it, which was interpreted by part of the public as a threat of the creation of the so-called Greater Albania. 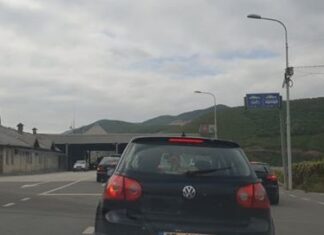