The Kosovo President, Hashim Thaci informed the US Special Envoy for the Belgrade-Pristina dialogue, Richard Grenell that he canceled his trip to Washington following the announcement that an indictment has been filed against him with the Kosovo Specialist Chambers.

The Kosovo Special Prosecutor announced today that it filed an indictment with the Kosovo Specialist Chambers against Kosovo President, Hashim Thaci, and the President of the PDK and one of the most influential politicians in Kosovo – Kadri Veseli and other persons whose names have not been announced. According to the indictment, they are charged with “a range of crimes against humanity and war crimes, including murder, enforced disappearance of persons, persecution, and torture.“

The Court’s announcement arrives just ahead of Thaci’s departure for Washington, where he would be accompanied by Avdullah Hoti at the Rose Garden to meet the Serbian delegation led by the Serbian President, Aleksandar Vucic on 27th June.

The news that Thaci canceled the Washington trip was first announced by US Special Envoy for the Belgrade-Pristina dialogue, Richard Grenell.

“I respect his decision not to attend the discussions until the legal issues of those allegations are settled,” Grenell tweeted.

Grenell added that he was looking forward to Saturday’s talks led by the President of Serbia, Aleksandar Vucic, and the Prime Minister of Kosovo, Avdullah Hoti.

„Following the announcement of the Special Prosecutor’s Office on the filing of the indictment, Kosovo President Hashim Thaci decided to cancel his trip to the United States, where he was invited to participate in the process of dialogue between Kosovo and Serbia,“ reads a brief press release issued by the Kosovo presidency.

In the first reaction to the news of the Kosovo Specialist Chamber indictment filed against Thaci and Kadri Veseli, the Vice-President at the Council for Inclusive Management, Shpetim Gashi told KoSSev that the initiation of court proceedings caused irreparable damage to the process of the US President’s Envoy, Richard Grenell.

Despite the filing of the indictment, Thaci was still able to attend the Washington meeting, as the indictment has not yet been confirmed. 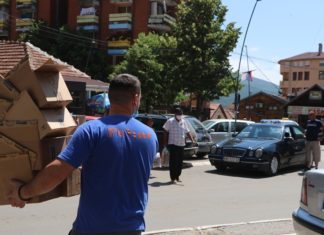