Yesterday was the twentieth anniversary since the NATO bombing of the former Republic of Yugoslavia. The central manifestation of the Serbian authorities was held in Nis. The president of Republika Srpska, Milorad Dodik, Serbian Patriarch Irinej, the President of Serbia, Aleksandar Vucic and a war veteran addressed the public.

Irinej: „May God judge them and it is well known that evil will not bring good“

„They have set us back more than 50 years. They have turned a prosperous country into dust and ashes,“ the Serbian Orthodox Church Patriarch Irinej described the consequences of the NATO bombing.

According to him, the bombing occurred due to „defamation.“ He sent a message to those who rejoiced at the bombing that it is something „only the devil can look forward to“.
„May God judge them and it is well known that evil will not bring good,“ the Patriarch underlined.

He told the citizens of Serbia that unity is the most important thing today.

„To be united and to defend our greatest sanctities in Kosovo and Metohija, and to preserve and leave this holy land, for which our ancestors shed blood and sacrificed their lives, in our legacy in the same state we received it from our ancestors. We should not give this holy land to anyone, we must defend it with all permitted means, and God forbid, we should also use some other means,“ Patriarch Irinej stated, adding:

„Let us embrace our homeland, which God has bestowed on us with many good things in it, let us get closer and unite, because our strength lies in unity. That’s what our history and culture want, that’s what our ancestors want.“

He criticized the “1 out of 5 million” protests, describing them as “a threat to the unity.”
„What we see today on the streets – it is not good, it gives our power to the enemies. It is known how one comes to power, in this way they cannot come to it, but they can harm their people and their state,“ Patriarch Irinej stressed.

Dodik: „To gather around legally elected political and state officials“

The president of Republika Srpska, Milorad Dodik talked about Kosovo during his speech, stating that those who bombed Serbia because of Kosovo are now asking for Kosovo’s recognition. Dodik also shared Patriarch Irinej’s opinion on the importance of unity.

„It is important that Serbia gathers today, and all of us Serbs around Serbia, around legally elected political and state officials, around our negotiators in something that is very difficult, painful, and requires strength,“ he said, adding that it is „important to give power to Mr. Vucic and his negotiating position.“

Dodik also spoke of „everything that is happening on the streets of Serbia.“

Dodik also spoke of unification in his famous interview for Deutsche Welle two years ago. Responding to the question of how he perceives the Balkans when the region becomes part of the European Union, he drew Republika Srpska and the north of Kosovo on a map as part of Serbia. When the journalist commented „Serbia, Srpska and the north of Kosovo united?“, Dodik said: „What’s wrong with that? This is wonderful.“

„The following years are our years, years of our nation and people gathering, and years of our state union, whatever anyone thinks about us. I believe that this will become clear to others because there is simply no other path. Why can others have their own countries and Serbs cannot have their own united state?“ he asked.

Vucic: „We can talk about everything today, except about us forgetting (NATO bombing) and Kosovo“

„In the end, we will not remember the words of our enemies, but the silence of our friends,“ the President of Serbia, Aleksandar Vucic, started his speech by quoting Martin Luther King’s words, which are, according to Vucic, the most appropriate „to start the commemoration of NATO bombing“.

„At that time, we had almost no friends. We share our gratitude to those who were not against us, but almost no one helped us. We were alone, confronted with almost the greatest military force in the world, with a coalition of the rich and powerful, with 22,000 tons of bombs and rockets and with their clear goal. To defeat us, humiliate us and surrender a part of our territory to somebody else. We have friends again today, 20 years later, but also those who are no longer our enemies, with a clear difference in opinion about everything that happened and what we consider a crime. And the death of 2,500 civilians, the death of 79 children, the devastation of a country, damage that is measured in tens of billions of euros, will always be a crime for us. For them, even if they want to admit this much, it is a mistake,“ President Vucic underlined the difference in the interpretation of the events which occurred in the spring of 1999.

Nevertheless, the president added, „for a long time ruins have not been a major part of our memory.“

Vucic talked about the economic progress of Serbia, but also about the victims of the bombing.

He said that „2.500 lives will not and cannot be forgotten“, emphasizing that „Serbia is allowed to and it can and it must say today,“ that taking these lives were a crime – all thanks to the fact, according to Vucic, that „Serbia is stronger and more powerful today than it ever was.“

The President listed the names of those who defended „the small and proud Serbia,“ while stressing that talks are required. Topics for discussion, however, come with a restrictive list, which includes, among other things, Kosovo, which has been the subject of negotiations in Brussels for the past eight years – he added.

„We can talk about everything today, except about us forgetting (NATO bombing) and Kosovo, which you have almost removed from the rest of our body with your bombs and bad politics, both theirs and our own. And about the neighbours who were silent, and about the rest of Europe that took part in solutions, compromise, and peace,“ Vucic said yesterday, although he has been underlining the opposite for months – that there is no long-term peace without compromise and delimitation with the Albanians.

„Serbs who live in Kosovo and Metohija are the most disenfranchised ethnic group living in Europe. UNMIK and KFOR and EULEX, at least formally, should be concerned about their rights and security, in accordance with Resolution 1244. I am asking why those who allegedly destroyed our country because of the rights and security of Albanians are today not interested in providing security for Serbs in Kosovo and Metohija,“ Vucic said.

He also wondered why Dick Marty’s report on alleged organ trafficking of abducted Serbs remains “ignored” and why is it suddenly “so difficult” to establish the agreed Association of Serb municipalities, as well as why it is “so terrible to abolish the uncivilized taxes” and why “the creation of an Albanian military force” is tolerated.

The President said that „the best and the bravest among us are Serbs from Kosovo and Metohija who are guarding our homes and our Serbian name and surname“ and expressed hope that “it will not cross anyone’s minds to attack them.”

„Otherwise, listen to me carefully, we will not and we cannot let down our people,“ said Vucic.

He took the opportunity to remind that Serbia does not want NATO integration and that „military neutrality is our natural choice“.

Although he said earlier that Serbia no longer wants to talk about compromises, the president also recalled that Serbia proved to be ready for a compromise. „Unfortunately, they do not want the Serb’s offered hand, they want our bowed heads“ – he said without specifying about whom exactly he was talking about.

„Serbia had with its economy, military, with its international reputation, dedication and European values, secured its position as a respected initiator of political solutions. We have shown that we are ready for compromises, for concessions, to forever close the book of constant conflicts and open a period of peace and prosperity for all the peoples of the Balkans. Unfortunately, it’s clear that others do not want this. It is clear that they only want defeat, it is clear that they only want Serbia’s humiliation and defeat. To that, our answer is clear – we always want talks and negotiations, but no matter how long you wait, you will not see the defeat of Serbia,“ he said.

The President of the Republic concluded his speech with his definition of „the essence of a free, sovereign and independent Serbia,“ which is „to bow our heads when we want and not when they ask us to do it.“ 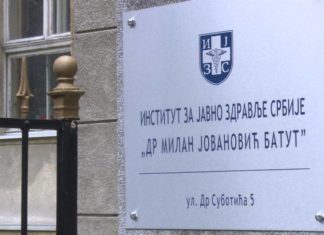