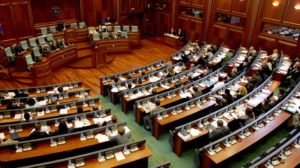 Srpska Lista announced today that „the attempt to abuse the card of the member of the Srpska Lista presidency, Slavko Simic, with the intention of discrediting the MP of Srpska Lista, was unsuccessful.“ This party reacted following yesterday’s announcement that the official record of the vote of the Assembly of Kosovo stated that Simic was present at the session for the vote for the platform for dialogue with Belgrade. It appears, however, that this is not the first time that the card belonging to the Srpska Lista MP was „abused“. According to several records of voting in plenary sessions available on the website of the Kosovo Assembly, the names of three other members of Srpska Lista – Sasa Milosavljevic, Jelena Bontic, and Srdjan Mitrovic were also registered, while Slavko Simic was electronically registered to have attended a session for several other occasions.

The Kosovo Assembly denied the information that the Vice-President of Srpska Lista, Slavko Simic attended the session of the Kosovo Assembly on March 7th, 2019, despite the fact that his name is on the list of deputies who were present during the session. The list from the official record is available on the institution’s website.

This Assembly added that his parliamentary card was „intentionally or unintentionally abused by one his colleagues that were present“, and that „verification of the card itself does not mean physical presence at the session and does not allow a quorum.“

Following the claims of the Assembly of Kosovo and Srpska Lista’s claims that „verification of the card itself does not mean the physical presence at the session and does not allow a quorum“ and that the card was „misused“, the legality of adopting the platform voted on by only 59 deputies, out of a total of 77 electronically verified deputies, should be brought into question.

On the other hand, Srpska Lista claimed that it was a „misuse of the card“ of this MP, adding that „the media had mistakenly reported incorrect information.“ However, the name of Slavko Simic was also included in a screenshot of the list with the logo of the Kosovo Assembly, which the same party published yesterday. Simic’s name is also present on the official record from the plenary session.

Intentional or unintentional misuse of cards of other Srpska Lista deputies?

KoSSev, however, reviewed several official records from other plenary sessions of the Kosovo Assembly since the beginning of this year. At sessions which had a quorum for voting, the name of the MP Slavko Simic was registered on several sessions, but also the names of other MPs of Srpska Lista who, according to the electronic registration, reportedly attended the sessions.

Srpska Lista has been boycotting the work of the Kosovo Assembly since November, while this coalition partner of the government led by Ramush Haradinaj has been claiming to have „switched to the opposition“ since March 26th.

Abuse of a parliamentary card is a illegal act.