Kosovo police announced new details about yesterday’s assault of RTV Puls owner from Silovo, Nenad Milenkovic and his colleague C.G. (1984). The assault took place outside the North Mitrovica municipal building. The case has been classified as „minor bodily harm“ and „destruction or damage of property“. The perpetrators remain unknown for the time being, Kosovo Police spokesman for the north region, Branislav Radovic confirmed for KoSSev.

“On April 27th, around 9:40h, unknown persons attacked Serbs, employees of TV Puls from Silovo near Gnjilane, in Lole Ribara Street in Mitrovica, in front of the Mitrovica municipality,” said Radovic.

He confirmed the allegations made by Milenkovic yesterday that the injured party intended to submit tender documentation for the construction of residential buildings.

„The owner of Puls from Silovo came to submit an offer to participate in a tender for the construction of residential buildings in North Mitrovica. At the time, the director and employees of TV Puls were not on duty but came as representatives of the Puls company, which is also registered for construction works. They came to submit tender documentation, which have been stolen,“ Radovic said.

Radovic also confirmed that a white NISSAN passenger vehicle with KS license plates was damaged and that the window on the left rear door had been broken.

The vehicle is owned by RTV Puls.

The serious crimes prosecutor has been notified about the case. The prosecutor ordered that the case be referred to the General Department of the Basic Prosecutor’s Office in Mitrovica.

The case is under the jurisdiction of the police station in Mitrovica North.
An investigation is ongoing.

The owner of the private company “Puls inžinjering”, Nenad Milenkovic claims he was attacked by four masked assailants yesterday in front of the Serbian-sponsored North Mitrovica municipal building. Milenkovic was going to apply for a public tender for the construction of residential buildings in North Mitrovica.

Milenkovic announced that he would be filing criminal charges and sending a complaint to the Public Procurement Commission on the suspicion that the municipality of Kosovska Mitrovica committed malfeasance.

The attack on Milenkovic was condemned by media associations, the OSCE in Kosovo and Vienna, the Kosovo Office, demanding that the competent authorities identify the facts and circumstances of the case as soon as possible and find those responsible, as well as to determine motives. The public company “TV Mreza” – which RTV Puls is also part of – also reacted today, as did the president of the North Mitrovica Provisional Authority, Aleksandar Spiric.

Spiric: I condemn every attack and demand that those responsible are found, attacks on the municipality are shameful 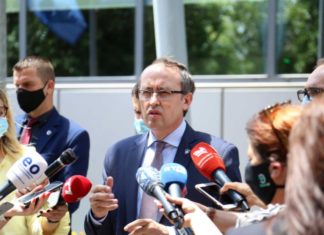