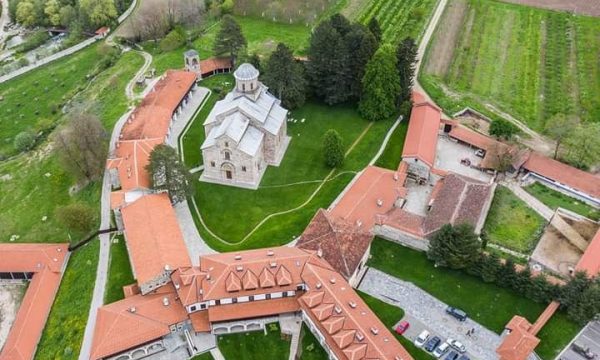 In this situation, answering such letters without previous respect of judicial decisions and the rule of law is absolutely pointless, reads the brief reply of the Diocese of Raska and Prizren to Kurti’s letter to Father Sava Janjic, in which the Kosovan Prime Minister expressed his desire to visit the Visoki Decani monastery.

The Diocese of Raska and Prizren remains on its previously clearly stated position that if Kosovo Albanian institutions want to show the minimum of good will for respecting the rights of the Serbian Orthodox Church in Kosovo, they are obliged to fully implement the decision of the Kosovo Constitutional Court from 2016 which recognized the monastery property – reads the brief statement published on the website of the Diocese.

“This decision has been persistently ignored for five years despite requests for its implementation by the monastery and international representatives. Besides, the Minister of Spatial Planning from Mr. Kurti’s Government publicly rejected the decision of the Implementation Monitoring Council from November 2020 on the construction of the bypass road around the monastery’s protective zone. Undermining this decision which was adopted with international facilitation is practically calling for the violation of the Law on Special Protected Zones. In this situation, answering such letters without previous respect of judicial decisions and the rule of law is absolutely pointless,” the Diocese once again underlined.

The reaction arrived just a day after the Kosovo Prime Minister’s letter to the abbot of the monastery Visoki Decani was published on social networks by the Kosovo Minister of Culture, Youth, and Sports, Hajrulla Ceku. In the letter, Kurti expressed his desire to visit the Visoki Decani monastery to discuss issues of common interest with the abbot.

The Kosovo Prime Minister sent a letter to Abbot Sava Janjic in the same week that he, along with Vjosa Osmani and Glauk Konjufca, wrote to UNESCO, asking it to remove four Orthodox monasteries in Kosovo, including Visoki Decani, from the list of endangered monuments. The Diocese has been alerting for years that churches, monasteries, and Orthodox sites in Kosovo are endangered, including property and believers.

Kosovo officials also asked for Kosovo to be listed as the responsible state party for his monastery instead of Serbia as it was so far, and accept Kosovo as a member into UNESCO. Kurti and Osmani previously sent a letter to Europa Nostra, after this organization shortlisted Visoki Decani for the list of the 7 most endangered European cultural monuments for this year. In April, once the monastery was officially included in this list, the Kosovan Foreign Minister, Donika Gervalla and Hajrulla Ceku also wrote to this organization – opposing the decision. The Kosovan officials claimed that the monastery is not endangered and that Europa Nostra had been deceived by the Serbian side.

Amid the latest tensions between the church and the Kosovo authorities, Bishop Teodosije of Raska and Prizren informed the public last week that all communication with Kosovo authorities is suspended until the rule of law is established and the decision of the Constitutional Court regarding the return of the land to the Visoki Decani Monastery is fully implemented.

Kurti in a letter to Abbot of V. Decani: I want to visit the monastery and discuss issues of „common interest“

V.Decani: Respect for the law, religious and ethnic diversity is the main criteria for a mature government, but Kosovo has shown that this is not the case