Serbian President Aleksandar Vucic reiterated today that there are no Serbs left in Kosovo Polje and that only a few Serbs remain in Bresje, Ugljare, and Caglavica.

The state is trying to prevent this in different ways, even by purchasing land, including other measure as well, said Vucic.

This is a struggle, he added.

Officials say that more than a thousand Serbs live in these above-mentioned four locations.

Based on information RTV KiM received from the representative of the village of Caglavica i.e. Ugljare, more than 1,000 Serbs live in these two villages – between 450 and 500 in Caglavica, and 612 in Ugljare.

The Provisional Authority of the Kosovo Polje Municipality told RTV KiM that 65 Serbs live in Kosovo Polje, and 135 in Bresje.

All three places mentioned by Aleksandar Vucic – Bresje, Caglavica, and Kosovo Polje were places with a Serbian majority before the war. The majority of Serbs left Kosovo Polje immediately after the war. Bresje was abandoned by the majority of its Serbian inhabitants after March 2004, while the residents of Caglavica, where there were about 300 Serb houses before the war, started selling their property after 10 Serbian houses were burned down on March 17th, 2004. In recent years, Albanians have built entire settlements, shops and dozens of motels in this village, and they are still building today. Building permits are issued by the Municipality of Gracanica, where the representatives of Aleksandar Vucic’s party have been in power for the last five years.

Vucic: We are far from a solution. I have a deep respect for our church

Vucic: I told the truth, not that American television show, the Voice of America, or whatever it is

VOA revealed Vucic’s inaccurate data on how many Serbs live in Caglavica, Bresje, and Kosovo Polje 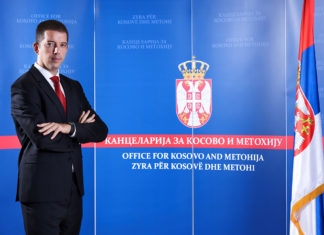