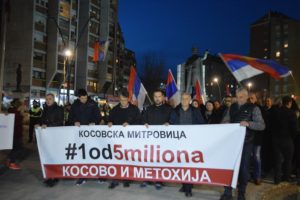 The third “1 out of 5 million” protest was held in North Mitrovica last night. Approximately a hundred citizens participated in the protest, as usual, ending the walk at the site of the murder of the SDP leader, Oliver Ivanovic, where they lit candles in his honor and reiterated their demands for the murderers and perpetrators to be found. The protest was marked by another in a series of verbal incidents and the messages of the activists of the National Movement ‘Otadzbina’ against the policy led by Serbian President, Aleksandar Vucic. This is the first time this movement joined the ‘1 out of 5 million’ protests. 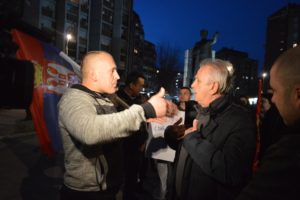 A minor verbal incident occurred immediately before the protest when Mitrovica citizen A.S. approached the organizers and loudly protested against ‘Otadzbina’ representative, Marko Jaksic, as well as against the leader of the Alliance for Serbia, Dragan Djilas. A.S. was also one of the participants in the “1 out of 5 million” protests. He confirmed the unofficial information that he was dismissed from the Student Center after his participation in the protests.

The organizer of the protest, Marko Jaksic expressed hope that the head of the Pristina Student Center, Jovo Popovic will return A.S. to work after “tonight’s act.”

The organizer of the protest and former SDP councilor, Marko Jaksic recalled the first local elections under the Kosovo laws, describing them as “the death of democracy.”

„Democracy was killed here with the elections in November 2013. Dimitrije Janicijevic was killed in January 2014, Oliver Ivanovic was murdered last year… with these murders, they are killing free thought here, however, they failed. You people are proof that freedom still lives in this city,“ he stressed.

Jaksic emphasized again that President Vucic and the head of the Kosovo Office, Marko Djuric will be held responsible for the safety of the participants in the protest and their employment status.

„My message for them is to stop doing that. Turning Serbs against each is stupid and unnecessary. There is not that many of us for us to fight because we are different,“ he concluded.

He also quoted the late Patriarch Pavle – „it will be we better when we are better people.“

Jaksic: Who gave Vucic the right to rip apart Kosovo?

The ‘Otadzbina’ activist and a former senior DSS official, Marko Jaksic spoke about the alleged 14-point agreement on 17 pages on Kosovo, underlining that it is planned for Mitrovica to become a district, so as not to be part of „neither north nor south“. He also claimed that, under this agreement, part of Gazivode – Brnjak, Rezala and Cecevo would belong to the municipality of Istok and the rest to Serbia.

„What we need and have to ask the president of Serbia is who allowed him to rip apart and divide Kosovo? Who gave him the right to rip apart the map?“ Jaksic asked.

At the very beginning of the protest walk, the participants shouted „Kosovo is Serbia“ and “Vucic the faggot,” while carrying Serbian flags and a banner reading: „Vucic, Lazarus’ curse will catch up with you“.

He also recalled that the premises of this movement were set on fire more than two years ago, stressing that the perpetrators have still not been found.

At the end of his address, Jaksic invited participants to pay tribute to the murdered Oliver Ivanovic, who is “owed gratitude for what he did for North Mitrovica.”

„Today’s Aleksandar Vucic’s rally and all rallies are attended by people who, I believe deeply believe in this, believe in our story, and they go there under the threat of losing their job, under the threat of being dismissed. While people who came tonight are threatened not only with losing their jobs, but with bombs and endangerment to their lives and the lives of their families,“ The ‘Otadzbina’ activist and a deputy in the Serbian Parliament and Slavisa Ristic told KoSSev.

Protesters: To return to the period before the election of 2013

“I’m walking because I feel free. Freedom is a luxury today, breathe freely, walk freely, and a bottle with oxygen will once be emptied,” one of the protestors Jelena Jaksic explained her reason for attending the protest.

„Honestly, I came out tonight because of the social injustice that exists in North Mitrovica,“ another protestor, Snezana Vasic told KoSSev.

On the other hand, activist and vice-president of the National Movement ‘Otadzbina’, Nebojsa Radulovic believes that the core of the problems lies in the 2013 and the first Kosovo local elections in Serb-majority areas in the north.

Radulovic expressed his belief that „the very participation in the Kosovo elections and the process of integration of Serbian institutions is a betrayal“.

The protest was secured by several police units. There were no other incidents.

Another protest was held in North Mitrovica yesterday against „the anti-civilization taxes, political persecution, staged warrants, attempts to seize Trepca and stifle the rights of Serbs in Kosovo“ – as was announced yesterday by student leader and Srpska Lista councilor, Nemanja Bisevac and the head of North Mitrovica Hospital Center, Milan Ivanovic. The protest was marked with the show of support for Serbian President, Aleksandar Vucic and harsh criticism of the Serbian opposition, the Albanians, the West, and those who express different views to the SNS and the state’s rhetoric.