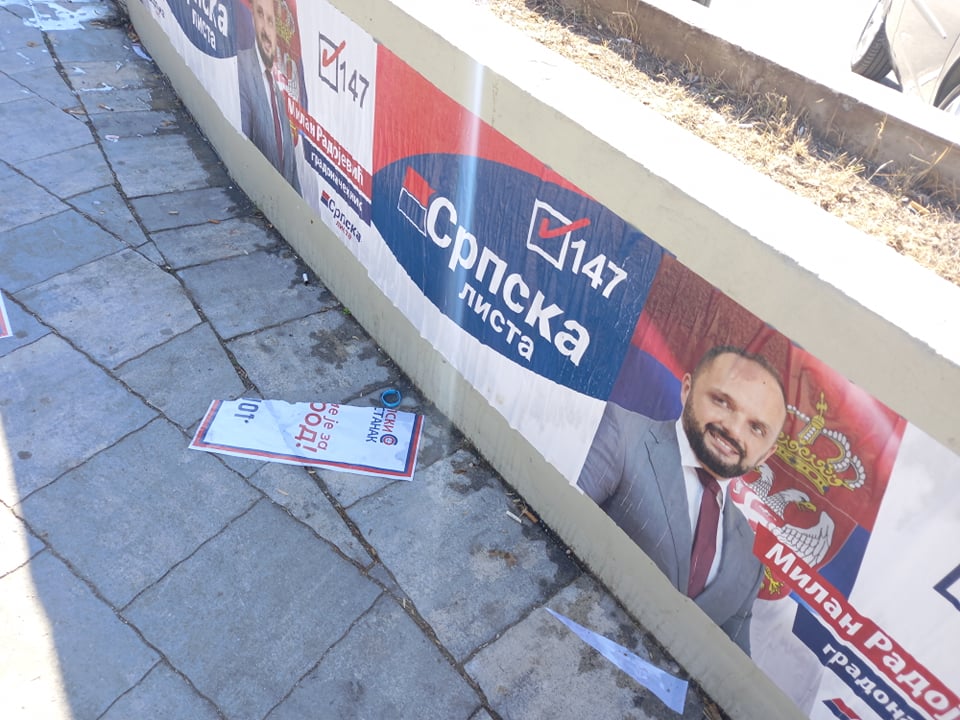 The Civic initiative Srpski Opstanak put up posters again yesterday after the first posters were torn down at several locations throughout North Mitrovica. However, the new posters were soon covered with the posters of Srpska Lista, the leader of Srpski Opstanak, Aleksandar Arsenijevic, told KoSSev.

„Yesterday, we put up new posters at a dozen locations, and they put up their posters over them last night,“ claims Arsenijevic, who reported the case to the Municipal Election Commission (MEC).

A candidate of this civic initiative for councilor in the North Mitrovica MA, Dusan Milunovic, also reported the case to the Kosovo Police.

„I called the president of the MEC, informed him about it, and told him about the locations where those posters were covered with posters of SL, to which he replied that he would make a report and that it was unacceptable. Dusan Milunovic reported the case to the police today,“ said Arsenijevic.

The leader of Srpski Opstanak revealed that there is no news on how the investigation into the first case they reported – i.e. when the first posters they put up were torn down – is progressing.

Srpski Opstanak confirmed for KoSSev this weekend that their posters were torn down at 18 out of a total of 20 locations where they were displayed all over North Mitrovica, which they immediately reported to the police.

„We believe that these are unfair conditions to be conducting the pre-election campaign in because we think that everyone has the right to free expression and to participate in election activities,“ Arsenijevic told KoSSev today.

The civic initiative Srpski Opstanak is set to participate in the upcoming local elections, which are scheduled for October 17th.

Aleksandar Arsenijevic, the leader of this civic initiative, was removed from the list of candidates for mayor of North Mitrovica by the CEC, due to a final judgment issued against him in the last three years, when he was found guilty of a crime and sentenced to a €300 fine.

Arsenijevic’s appeal was then rejected by the Election Complaints and Appeals Panel and the Supreme Court of Kosovo. The decision of the Kosovo Constitutional Court on the appeal is pending.

One candidate of this civic initiative for councilor of the North Mitrovica MA, Dusan Milunovic, who is also a councilor in the current convocation, has been confirmed.