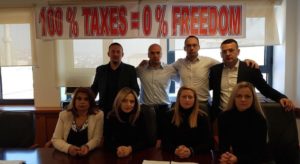 Srpska Lista MPs have been in the Kosovo Assembly since yesterday waiting for the arrival of European Commissioner Johannes Hahn in order to inform him about Pristina’s „anti-Serb moves“ that are leading toward „a humanitarian catastrophe“ of the Serbian people in Kosovo.  They are protesting against the 100% custom taxes imposed on Serbian products arriving into Kosovo. Hahn does not have an officially scheduled meeting with them. Srpska Lista’s political opponents claim the move of Srpska Lista MPs into assembly and their stay overnight is yet another performance in order to turn the attention away from the arrest of suspects in the case of Oliver Ivanovic’s murder. They should not push Kosovo Serbs into staged protests, some of them say as well. Haradinaj is the one to address rather than Hahn.

Srpska Lista „slept through“ the last four years in the Pristina parliament, so one more overnight stay will not help the Serbs either

The Kosovo Serb Party „harshly condemned“ the decision to stay overnight at the Assembly. It is the „advertising campaign of SrpskaLista and their mentors from Pristina and Belgrade“ – they claim.

„The desire of political amateurs from Srpska Lista to earn cheap political points on the misfortune of the Serbian people that they themselves caused by supporting Ramush Haradinaj’s government, which introduced a 100% tax, will not bring anything good to Serbs in Kosovo and it exclusively aims to shift the public focus from the arrest of those suspected of killing Oliver Ivanovic to the 100% tax topic and to hide Srpska Lista’s inability to achieve anything serious for the Serbs in Kosovo,“the Kosovo Serb Party wrote in a statement last night.

Its leader Aleksandar Jablanovic, previously called Srpska Lista MPs – „frozen hakes„. The party now claims that Srpska Lista „slept through“ for the last four years in the Pristina parliament, so one more overnight stay will not help Serbs either.

Jablanovic’s party urged Srpska Lista“not to hide behind the Serbian people“ and „not to force people to staged protests“:

„They should force their coalition partner Haradinaj to withdraw his decision to introduce a tax of 100% and to respect his decisions on leaving Kosovo institutions and thus show at least some consistency in his political activities.”

They should chase for Haradinaj not Hahn

The deputy of the Independent Liberal Party (SLS) in the Assembly of Kosovo, Slobodan Petrovic said that the latest action of Srpska Lista “is not altogether clear”.

They seem to be willing to chase Johannes Hahn through the corridors of the parliament to tell him that the tax increase is not a good move. Well, Johannes Hahn did not increase the taxes – the coalition partners of Srpska Lista did

„The position of the European Union and Hahn is, I think, well-known, and that is that the tax should be abolished. I think it is quite logical that Johannes Hahn should talk with those who introduced taxes and try to persuade them to abolish them, or, only if the members of Srpska Lista, as partners of the ruling coalition, do not feel responsible for increasing these taxes,“Petrovic told journalist Budimir Nicic.

Another performance, in order to be believed they need to step out of the Government

A deputy in the Serbian Parliament and the President of the local opposition Movement „Otadzbina“, Slavisa Ristic told KoSSev that this will be “just another show“for the SNS in Belgrade and certainly its protege Srpska Lista in Kosovo.

Apart from political marketing before (possible) extraordinary elections in Serbia, it will not have any other results -Ristic underlined.

Srpska Lista, if it wants to make a sincere move and to convince the public that they are honest –in order to be believed at all –they must leave the Kosovo Assembly and the government, and not do a performance

He added that he does not see the purpose of their stay in the Kosovo government, as he did not see one when they entered the government of Ramush Haradinaj and when they formed it.

Ristic also addressed the chief of Srpska Lista’s announcement that Kosovo’s municipal administrations ceased to exist in the north and the former Mayor of Zubin Potok, Stevan Vulovic’s claims that he “shut down Kosovo institutions” in this municipality:

„The next days will show whether Kosovo institutions exist in the North, that is, whether they will continue to receive Kosovo salaries. I wish that was so, but I’m not sure. Also, the move of the mayors and local self-government is one thing. The central level is a different matter. First of all, MPs and ministers are expected to leave their positions, not to say that they are freezing participation,“ Ristic told KoSSev.

Srpska Lista MPs will stay overnight in the Kosovo Assembly, as long as it takes until the arrival of Johannes Hahn