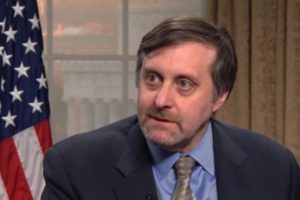 The U.S. Deputy Assistant Secretary Matthew Palmer recently visited the Western Balkan region. He stayed in Kosovo on October 23rd and 24th, where he held numerous meetings with Serb and Albanian political representatives, as well as with CSOs. The visit was followed by a series of media headlines on both official and reportedly unofficial meetings. Palmer himself gave two interviews to Kosovo media – Koha Ditore and RTV KIM from Caglavica.

Palmer unofficially asked Kosovo officials whether they were ready to give anything in return for a final agreement with Serbia, Pristina-based Klan Kosova reported.

“The U.S. does not have time to constantly deal with the relations of Kosovo and Serbia” – Palmer allegedly addressed this straightforward message to Kosovo leaders.

The political leaders who attended these meetings refused to comment.

Matthew Palmer also held a similar meeting with CSO representatives from Kosovo. Policy analyst and co-founder of Sbunker.net, Agon Maliqi, confirmed on his Facebook page that this meeting was held indirectly revealing the messages by the VIP.

„It is of great importance for the United States to end the Kosovo project, to remove Serbia’s dependence on Russia – which is holding the entire region hostage. You need to realize that explicit recognition by Serbia is at play, which will unblock Kosovo, Kosovo’s membership in the EU and bring new recognitions. Let the US settle it with Russia. But you must be aware that you will have to give something in return and not behave as Milosevic did in 1999 or as Kostunica did in 2008 – who refused something and then later lost something even more important. It’s up to you to decide what you are willing to give, it does not necessarily have to be territory,“ Maliqi posted on his Facebook page.

On the other hand, project manager at the Kosovo Democratic Institute (KDI), Jeta Krasniqi posed the question of how to get Serbia to recognize Kosovo.

“This is a discussion that we need to start with the entire political spectrum. If we estimate this process as important for Kosovo, then it also deserves serious commitment in order to accomplish this intention, taking into account all the unfamiliarities in the process, all the dangers and hesitation of the other side to accept Kosovo’s demands,“ Krasniqi wrote on Facebook.

The Minister of Communities and Returns, Dalibor Jevtic also reacted in the aftermath of the visit, saying that Palmer requested the return of Srpska Lista to the Kosovo government.