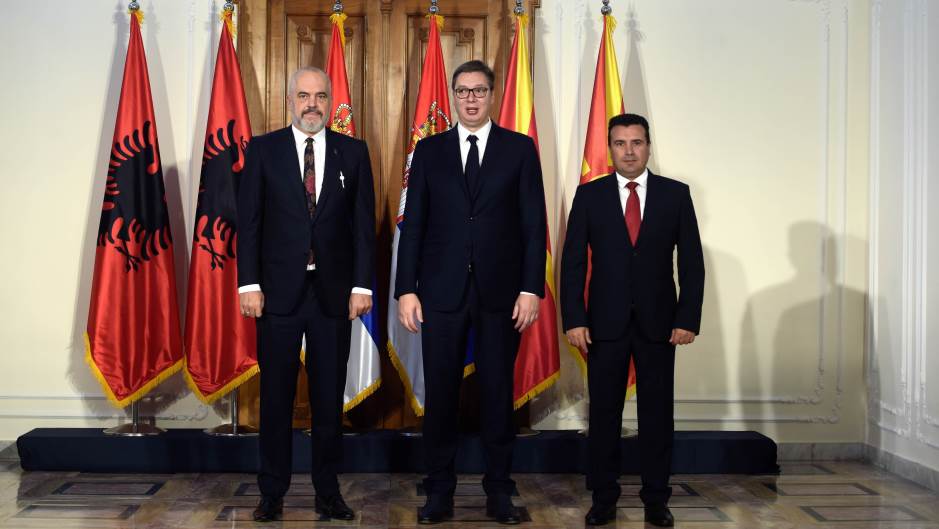 Talks within the Open Balkans initiative are set to continue in Tirana today. The creators of the initiative – the President of Serbia, Aleksandar Vucic, and the Prime Ministers of Albania and North Macedonia, Edi Rama, and Zoran Zaev – will be attending today’s meeting. Ahead of the summit, the Presidency of Serbia revealed that six agreements are expected to be signed. On the very same day, the opposition in Albania announced protests against the „Rama-Vucic anti-national pact“, and with the aim of „defending the national interest“.

The previous meeting within the „Open Balkans“ initiative was held in early November in Belgrade when the President of Serbia announced that a Memorandum of Understanding regarding work permits could be signed in Tirana.

As per the agreement, a work permit issued in any of these three countries would be valid in all members of the initiative, i.e. Serbia, North Macedonia, and Albania.

The Presidency of Serbia confirmed for the Tanjug news agency yesterday that a total of six agreements are expected to be signed at this summit.

An agreement on cooperation between accreditation bodies in the Western Balkans will also be signed.

The Serbian President will have an informal meeting with Edi Rama and Zoran Zaev at a joint dinner in Tirana today, and several meetings are planned for tomorrow, the Presidency of Serbia told Tanjug.

A meeting of the three officials and members of the delegations with the representatives of the Atlantic Council will be held in the Palace of Brigades in Tirana on December 21st, at which the Strategic Plan for the Open Balkans 2022 will be discussed.

In the end, the three leaders will hold a joint press conference.

Pristina, Sarajevo and Podgorica once again invited to join

Vucic, Rama and Zaev invited Pristina, Sarajevo and Podgorica, who objected to the initiative so far, to join the Open Balkans.

„Although the ‘Open Balkans’ Initiative has so far included only Serbia, Albania and North Macedonia, it has been and will be open to all members of the Western Balkans. We use this opportunity to once again call all our neighbors to offer to their citizens the benefits we offer to our citizens,“ the three leaders wrote in a joint letter published by the media in Tirana, which was then picked up by RTS.

They emphasized that despite the claims that they are „a barrel of gunpowder“ in Europe – as „responsible leaders“ they cannot allow the region to „return to the nightmares of the past, while the EU is unable to do more for enlargement at this stage“.

„We have our divisions, we disagree on some political issues, but we all agree that the economy and the four basic freedoms of the EU are the best way to give our region hope for lasting peace,“ the letter reads.

On the other hand, they say that the „Open Balkans“ is not a consolation prize for EU membership, but a big step towards it.

North Macedonian officials divided over „Open Balkans“ or is it „all good“?

Only a few days ahead of the new meeting within the „Open Balkans“ initiative, the President of North Macedonia, Stevo Pendarovski, described this initiative as „faulty“ during a joint press conference with the Kosovo president in Pristina.

Pendarovski said that the initiative will be unsuccessful until it covers the entire region, adding that, even in that case, it can only be one of the instruments for improving economic and trade cooperation, i.e. one of the aspects of the Berlin process, the Pristina media reported at the time.

„Pendarovski was wrong, it’s all good.

President Stevo made a mistake that morning, everything is okay, it’s all good,“ Vucic said.

Protests in Tirana over the summit, Tahiri: Vucic can only dream of Serbian hegemony

While the „Open Balkans“ initiators describe the initiative as beneficial for everyone and a way to connect the region, some have accused Serbia of wanting to use this initiative to establish „Serb hegemony“.

Some Albanian politicians, as well as the government and opposition representatives in Pristina, have opposed the initiative.

Former Prime Minister of Albania, Sali Berisha, announced a big protest in Tirana today and called on „all democrats“ to join him at 4 pm in „defending the national interests“.

Berisha emphasized that the protest was directed against the „anti-national pact Rama-Vucic“, but also that it was organized because of the „terrible theft“ reportedly committed by the current government in Albania, Klan Kosova reports.

The call for a protest was met with support in Pristina.

Following numerous messages from Kosovo that Belgrade wants to use the „Open Balkans“ to create a „new Yugoslavia“, another similar message arrived from the former chief negotiator of Kosovo in Brussels, Edita Tahiri.

„The Open Balkans will put nations under Serb hegemony. This is what Vucic is dreaming about on the eve of his arrival in Tirana,“ said Tahiri.

She stated that the „revived opposition“ in Albania will show Vucic „that he can only dream“. Tahiri also underlined that the announced protests also defend Kosovo.