Less than a day before the NATO Secretary General in Brussels held separate meetings with Aleksandar Vucic and Albin Kurti, the Serbian media extensively reported about KFOR’s announcement that it increased its presence at Jarinje and Brnjak, along with another piece of information: that two Kosovo Security Force jeeps arrived in this area. The Kosovo Defense Minister, however, soon denied the news. Previously, KFOR confirmed for KoSSev that they did not receive any request from KSF to enter the north, even though KSF can only enter northern municipalities with the approval of KFOR.

Two days ago, the Kosovoonline portal published an article – „KFOR: we increased our presence at Jarinje and Brnjak, as well as patrols in that area„.

Referring to the statements of the KFOR Public Relations Office, this media outlet reported that KFOR increased its presence at the Jarinje and Brnjak crossings, as well as its patrols in the area.

The same portal also conveyed KFOR’s assurances that they are ready to intervene if necessary, along with information about the arrival of two Kosovo Security Force jeeps in this area.

„‘We want to assure everyone that KFOR is ready to intervene if necessary,’ KFOR said in response to Kosovoonline‘s questions regarding the increased presence of KFOR at the Jarinje crossing and the arrival of two Kosovo Security Force jeeps in this area, as well as whether they had the necessary permits for that,“ Kosovoonline reported.

What particularly caught the public eye when it comes to this news piece – despite Kosovoonline highlighting the news of increased KFOR patrols – was the alleged arrival of two KSF jeeps in the area patrolled by KFOR, in the midst of tensions, as well as on the eve of Vucic and Kurti’s talks with Stoltenberg, and today’s meeting between Vucic and Kurti.

This media outlet, however, shared no evidence for this claim or its source.

The presence of KSF forces in the north of Kosovo is not permitted without KFOR’s permission, which has been repeatedly underscored by NATO officials and the President of Serbia.

„There is a Brussels agreement from 2013 that clearly stipulates that the KSF cannot enter the North without KFOR commander approval,“ NATO Secretary General Jens Stoltenberg told KTV in February 2019.

„When it comes to the Kosovo Security Forces, we always say that we should all adhere to UNSC Resolution 1244, which says very clearly that any movement towards the North should not take place without consulting the KFOR commander. And that is the message we sent to all the decision-makers in Pristina whom we visited today,“ Stoltenberg’s deputy Mircea Geoana said in an interview for KoSSev in early July after arriving in Pristina.

Kosovoonline’s news piece about the increase of KFOR troops near Jarinje and Brnjak, as well as the arrival of two KSF jeeps at the same points, was picked up by numerous Belgrade-based media. Some newsrooms from Belgrade even assigned teams to field duty because of this news piece. It was shared by tabloids and other pro-governmental media, including Novosti, B92, public broadcaster RTS and Tanjug.

Information about the arrival of two KSF jeeps in Jarinje and Brnjak was also reported by the media from the ‘other side’ – Danas, Nova.rs/FoNet, and newsrooms such as Insajder.

Insajder reported about yesterday’s events in a long updated text. In addition to what Stoltenberg, Vucic and Kurti, and other officials, said in Brussels, the text also included KFOR’s confirmation for the Kosovoonline portal that they increased their presence in Jarinje and Brnjak, but also the information that two jeeps of the „Pristina security forces“ came to this area. The editorial staff of Insajder changed the original word „KSF“ to „Pristina security forces“.

While the majority of media outlets published the news with the same title as Kosovoonline, tabloids such as Alo, which picked up Tanjug’s news in which the agency refers to Kosovoonline, shared a different headline: „READY TO INTERVENE“ KFOR brings troops to Jarinje and Brnjak, pact soldiers in the field„.

Mehaj: The news about KSF jeeps in the North is fake news from Belgrade

Minister of Defense of Kosovo, Armend Mehaj, denied the news about the arrival of KSF jeeps in Jarinje and Brnjak last night, while also accusing Belgrade of „continuing with propaganda“ and „producing fake news on a daily basis in order to create a sense of insecurity and instability in the North“.

Furthermore, he claims that Belgrade is „the biggest producer of propaganda and fake news, to achieve its goals that do not coincide with democracy, peace and stability“, and that it does so “by any means”.

„They even go so far as to stage cases and situations to such a level that they kill their own citizens and pass the blame to the Albanians. Cases like this are still fresh for us, we remember the ‘Panda’ case when six young Serbs were killed by the Serbian forces themselves and the Albanians were accused of it,“ Mehaj wrote in a Facebook post.

This minister claims that the „campaign of inciting hatred and creating insecurity, especially in the north“, is not happening by chance – but that it was planned ahead of the meeting between the Prime Minister of Kosovo and the Secretary General of NATO, Jens Stoltenberg.

He also addressed media allegations about the alleged arrival of two Kosovo Security Force jeeps at the Jarinje crossing.

„In continuation of the fake news, the Serbian media published the news that two vehicles of the Kosovo army are circulating in the north of the country, that news is false, fake news,“ this minister said.

He urged citizens, especially the citizens of the north, „not to fall for the propaganda media of Serbia“.

Mehaj called on them to inform themselves through the official announcements of the Kosovo security institutions.

KFOR: We did not receive any request from KSF to visit the North

Regarding these recent media allegations about the arrival of KSF vehicles in Jarinje, the KoSSev portal contacted KFOR for confirmation.

„KSF can only enter the Northern municipalities with the consent of Commander KFOR. KFOR has not received at this moment any request from KSF or from the Institutions in Kosovo,“ KFOR said in reply to KoSSev’s inquires.

They also underlined that the NATO-led KFOR mission is fully focused on the daily implementation of its UN mandate, in order to ensure a safe and secure environment and freedom of movement for all the people in Kosovo.

“KFOR maintains a visible and agile posture on the ground, and the KFOR Commander is in regular contact with all of his main interlocutors, including the representatives of the Kosovo security organizations and the Serbian Chief of Defense.”

In their response, they also repeated what the Secretary General of NATO told Vucic and Kurti in Brussels yesterday:

„KFOR is and will be ready to intervene to maintain the safe and secure environment and freedom of movement according to its mandate.“

In the midst of the latest license plate crisis, inflammatory reports and headlines have been running rampant. Alerts about the danger of Storm and Flash for Serbs in the north – as previously alerted about by Serbian President Vucic – have been gracing headlines and covers. On the day when the Kosovo government decided that owners of vehicles with Serbian license plates in Kosovo have two months to register their cars to RKS, and that it will start issuing an entry-exit document for citizens with Serbian identification cards, the president announced „a general attack on the North by October 1st“, with the emphasis that „Quint supports the Albanians“, and that the Srpska Lista „will no longer tolerate this“.

„Who are the Albanian terrorists targeting in Kosmet“ – reads the text on the cover of Politika, penned by Dejan Spalovic. Spalovic writes that allegedly „Albanians, in a decades-long attempt to expel the Serbs from Kosovo, are now ready to – in a terrorist-like style – physically liquidate the leaders of the Serbs“.

„Attacks on Serbs are long-planned activities in the methods of special war, they are carried out where organized resistance is announced. The goal is to eliminate these people from Kosovo, whether physically or to create a new exodus,“ states the text published by Politika on August 13th.

„It is a standard thing that those who organize resistance are killed, so that the plan President Vucic talked about has the basis and goal of disrupting any organized resistance of the Serbs, if the Albanian paramilitary really moves toward the north“, this „former officer of CIC“ told Politika.

On July 22nd, another text of the same author graced the cover of the same newspaper – „Western services in the hunt for Milan Radoicic.“ In this piece, the author explains that „the return of the vice-president of SL, Milan Radoicic, to Kosovo and Metohija seriously disturbed the extreme Albanians“. 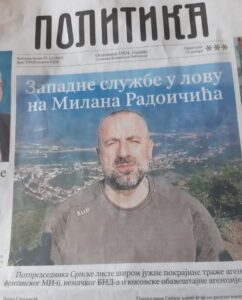 The information presented in that text was done without any arguments and evidence to support the claims made: from the fact that in pursuit of Radoicic since his return to Kosovo, „agents and their associates have been running around the province for the last month“, to „the so-called sleeper agent of a powerful Western service“ suspected „of having organized and carried out attacks on the police in the northern part of Kosovo at the beginning of the year“, through „paranoia“ and „fear“ in these circles of him, changes in the Kosovo Prime Minister, Western diplomats, and the „lack of desire“ of the Albanian special forces to go north because they have „psychological problems“ caused by fear.

The Belgrade-based tabloids frequently report how Pristina wants to „attack the North“, without adding official confirmations or disclaimers that this is the opinion of certain analysts.

The text states that training was organized in Pristina for members of special units, which included the use of „heavy machine guns“.

Although the title notes that „Kurti also wants to use machine guns to remove Serb barricades“, the text says that the training is „most likely“ aimed at preparing members of the Kosovo Police to remove possible Serb barricades in the north.

At the same time, Srbija Danas recently published a news article entitled „ALBANIANS PREPARING FOR AN ATTACK? The minister from Pristina said, ‘We are ready,’“ – thus referring to the announcement by Armend Mehaj that KSF is „ready to protect every corner“.

„KURTI CRIES: Quint to contain Vucic and Serbia or there will be war“, „Quint places focus on Pristina plates rather than peace in Kosovo“ – read some examples of yesterday’s headlines.

Such reporting with inflammatory rhetoric, without arguments and evidence for claims of violence, hatred, conflict, murder plans, expulsion, etc. – although a visible violation of the code of ethics in journals – has gone unpunished for years now. The consequences of this are, unfortunately, very visible in the consumers of their media content and their environment.

As for patrolling during another summer crisis, KFOR patrols are currently visible on the roads of northern Kosovo, as well as the armored vehicles (of the special units) of the Kosovo Police, whose presence has become somewhat frequent in this area after the previous license plate crisis last September. Prior approval from KFOR for their arrival is not required. However, their stay in the North was unthinkable for years.