Last work week ended with the news that Pristina failed in its endeavor to be represented in CEFTA without UNMIK’s mediation. The same week started with the announcement of the meeting within the „Open Balkans“ initiative in Tirana. A couple of days earlier, the Pristina Minister of Transport promoted the project of a railway between Durres and Pristina, while standing in front of the picture of something that resembled so-called „Greater Albania“. 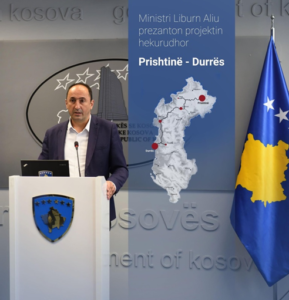 At the moment, at least three integrative processes are underway that directly affect the Serbs in KiM, however, as in other areas, their essence is lost in sensationalist headlines, announcements, and press releases. Therefore, this text is an attempt to determine the position of Kosovo Serbs within these integrative processes, as well as to assess their impact on them – to the extent this is possible within such a text.

CEFTA – the Central European Free Trade Agreement – is the oldest integration process in the region. It was signed by (in alphabetical order): Albania, Bosnia and Herzegovina, Montenegro, Moldova, Northern Macedonia, and Serbia, as well as UNMIK on behalf of Pristina.

A relatively newer regional integration process is CRM (Common Regional Market). This initiative came about from the Berlin process in 2020. It represents institutionalized cooperation between the EU and six jurisdictions of the so-called Western Balkans – aiming, among other things, to enable four European freedoms (free movement of goods, services, capital, and people) in the Western Balkans.

Compared to CEFTA, CRM is somewhat broader in terms of content, but it is territorially more limited, as it does not include Moldova. Certainly, CRM relies heavily on CEFTA, but it still does not have a solid legal framework, instead, it is based on an action plan adopted at one of the Berlin process summits.

The last in a series of regional integration processes is the so-called Open Balkans initiative. Currently, Albania, North Macedonia, and Serbia are part of this initiative, which, following a series of joint statements, declarations, and so on of the heads of these three countries, is just beginning to acquire more precise content – it centers on creating a single market, with the current focus being on trade facilitation, inspection cooperation and free access to the labor market – although still without a solid legal framework.

In relation to CEFTA and CRM, it seems that „Open Balkans“ strengthens the level of integration because it aims to completely abolish border controls in the field of trade and fully open the labor market throughout its territory to the citizens of each of these countries.

In parallel with the regional integration processes, and based on a series of agreements between Tirana and Pristina, the process of Albanian integration is taking place. In the last iteration of this process, Tirana and Pristina, among other things, pledged to completely remove border controls, facilitate the process of obtaining residence and work permits, as well as recognize diplomas, professional qualifications, and social security contributions.

Unlike regional integration processes, which (except for CEFTA, which is a multilateral agreement) are based on political initiatives and acts, Albanian integration is based on bilateral agreements, with a common institutional structure currently chaired by one of the prominent activists of the Pristina-based Self-Determination from Albania.

In terms of content, it does not deviate too much from regional initiatives – in fact, it can be said that it strengthens the level of integration between participants to the same or greater extent as the „Open Balkans“ when compared to CEFTA and CRM.

Of course, we should bear in mind the fact that Tirana and Pristina are already largely integrated when it comes to other areas – I recently wrote about energy, and now, their foreign policy, which they have been pursuing since 2016, is also worth mentioning – therefore, a complete trade and labor market integration is the logical next step.

When it comes to CEFTA, I would not be exaggerating if I were to say that the current Pristina authorities do not like it. Certainly, they insist for it to be replaced with something called SEFTA (South East European Free Trade Agreement), at whose essence (in addition to the cosmetic change of name) is the fact that Pristina would operate independently, i.e. without UNMIK’s mediation. The latest failure in this is likely to result in the complete marginalization of CEFTA by Pristina.

From Belgrade’s point of view, CEFTA is supported only in principle, as it is one of the few remaining international forums in which UNMIK still presents Pristina. In essence, Belgrade has never fully used the mechanisms at its disposal via CEFTA to sanction Pristina for its numerous violations of that agreement in recent years – such as the nationalization of RMHK Trepca, the introduction of the so-called „tariffs“ and „reciprocity“, etc.

What is interesting is that the Prime Minister of Pristina sent a list of 11 requests to Belgrade, which almost completely corresponds to what is enabled by CEFTA (which Pristina regularly violates), CRM (which Pristina nominally supports) and „Open Balkans“ (which Pristina resolutely rejects). A rational observer cannot help but wonder what the real goal of such conduct is – the only certain thing is that it is not based on good faith.

While Pristina nominally supports the CRM, it is well-known that it resolutely rejects „Open Balkans“.

In that sense, regional integrations are of almost negligible importance for Serbs in KiM. CEFTA will be marginalized, CRM is still at the level of an action plan, and Pristina does not support the „Open Balkans“.

In addition, the only way for a Serb from KiM to take advantage of the benefits of the „Open Balkans“ in the future would be to move from KiM to Serbia proper (including to obtain a passport not issued by the Coordination Directorate, and all that goes with it), or to establish a company in Serbia proper that plans to operate in Albania or North Macedonia.

On the other hand, Serbs from KiM can enjoy all the benefits of Albanian integration if they have a Pristina passport, but only in Albania.

It seems that the topic of integration is another issue that shows the full depth of legal hopelessness that has befallen Serbs in KiM. In a state they consider their own, they are second-class citizens, and if they leave KiM, or if they fully „integrate“ into the Pristina system, they will have greater rights.

They have been left out of Serbian politics and thus neglected, and due to the Brussels process, they cannot fully enjoy the Berlin process. Such a position has devastating consequences – the latest example is Pristina’s decision in November to deny all unvaccinated individuals entry into KiM. The ban, if maintained, will permanently impede movement between Serbia proper and KiM and cut KiM away from all regional integration processes.

This topic also shows the dimensions of the apathy of Belgrade, which promotes regional integration only nominally, i.e. without fully using all the possibilities they provide for the protection of the rights of Serbs in KiM (CEFTA), i.e. without taking into account the position of Serbs in KiM (when it comes to the „Open Balkans“, I could not find any publicly available information whether it includes citizens of the Republic of Serbia from KiM).

It also shows how detrimental Belgrade’s current treatment of Pristina within the Brussels process actually is for the interests of Serbs from KiM, and, ultimately, for their existence. For example, as far as I’m aware, no one from Belgrade has yet reacted to the collective ban on entry into KiM, although they regularly announce themselves when an individual is barred from entering KiM.

Finally, this topic shows how great Albanian ambitions are, as well as the utilitarianism of Albanian politics, given that in all the listed integration processes (both regional and Albanian), Albanians are the ones that absolutely benefit the most. This benefit will be even greater if it turns out that the effect of the so-called diagonal cumulations is possible – that removing the borders between Tirana and Pristina will result in everyone with a Pristina passport enjoying all the benefits of the „Open Balkans“ (unlike passports issued by the Coordination Directorate).

If Belgrade fails to fulfill Pristina’s eleven infamous demands, Pristina’s demands would still be met via this diagonal cumulation, through the „Open Balkans“, which Belgrade wholeheartedly advocates. In that sense, what is interesting is that according to the current research in Albania, the support for the „Open Balkans“ is a little smaller than the support for the unification of Tirana and Pristina.

Greater Albania is not the bogeyman, it is becoming the reality – and both the Brussels process and the „Open Balkans“, as two strategic determinations of Belgrade, contribute to that. Therefore, it is quite justified to talk about Albanian integration, rather than a regional one.