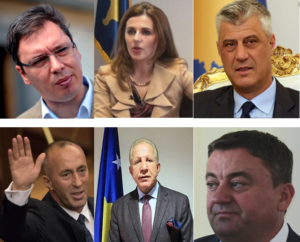 „Disgraceful“, „disgusting“, „shameful“, „madness“, „unconscionable“ – these are just some of the reactions of top Pristina officials to the Serbian President, Aleksandar Vucic’s statement on „the fabricated crime in Racak where everything was fabricated by that thief and a fraud and a crook, Walker.“ The news that former Kosovo minister and current Member of Parliament, Todosijevic was sentenced to two years in prison in Pristina court today for his earlier statement on the Racak case was put on the backburner tonight – at least for the Kosovo media and social networks. The reactions of Kosovo officials have also downplayed the previous strong condemnation of Kosovo Serbs and Serbian officials in the wake of today’s ruling.

Throughout the day, the Kosovo media reported on Todosijevic’s sentence and the urgent press conference of Srpska Lista in North Mitrovica – while conspicuously making no assessments and comments.

They wrote about the warning of SL chief and current Mayor of North Mitrovica, Goran Rakic, that he would urge all Serbs to leave Kosovo’s institutions if such a ruling is upheld by the Court of Appeals.

However, Kosovo officials’ reactions were “provoked” by Belgrade’s reaction to this ruling, precisely, by a statement made by Serbian President, Aleksandar Vucic, who said that „all members of Srpska Lista will repeat” the following words:

„A fabricated crime in Racak where everything was fabricated by that thief and a fraud and a crook, Walker.“

Kosovo Ambassador to the United States, Vlora Chitaku reacted harshly to the statement by the President of Serbia, describing it as „utter madness“.

„This is utter madness,“ Chitaku said, noting that Racak was “a tragedy which unfolded before the eyes of the world and revealed the true cruelty of the Serbian regime in Kosovo.”

“Denial is unconscionable. Shame on Serbia!” – she tweeted.

He added that „Vucic’s pathological hatred of Albanians is also evidenced by his latest statement that the Racak massacre that shocked the entire world in 1999 was fabricated.“

„It is unfortunate that Serbia continues to harbor ethnic hatred of Albanians and deny genocidal crimes, contaminating the future and reducing the chances of peace and reconciliation in the region,“ he wrote on social media.

“I see officials from Serbia denying some of the worst crimes against civilians that happened in Europe, confirmed by ICTY, like Racak.”

“Peace, reconciliation, justice cannot be built based on denying crimes,” he added.

“It was a grave crime against humanity by the Serbian police and army. The commander of the unit that committed the massacre Goran Radosavljevic is protected by his friend Aleksandar Vucic,” Pacolli tweeted.

International representatives have not reacted so far to the today’s stream of events and new political tensions.

On the other hand, the Serbian side, along with Vucic and Srpska Lista, condemned Todosijevic’s sentence. The Pristina Court recycled a verbal offense from the undemocratic SFRY, Ivan Todosijevic’s lawyer, Nebojsa Vlajic told KoSSev earlier this morning.

“The Criminal Defense Division of the Basic Court in Pristina recycled a long-forgotten crime today – a verbal offense under Article 133 of the SFRY Criminal Code – an undemocratic state, and even there such a judgment could not have been rendered and even there such things did not happen. He was sentenced to two years in prison for what he said. This speaks enough of the state of human rights and freedoms and democracy, especially in relation to minorities in Kosovo, that one is simply not allowed to say something that the authorities do not like or that someone does not like. This means that anyone of us who says something similar – can face the same fate, which is terrifying. Living in such a society is terrifying,” said Ivan Todosijevic’s lawyer, Nebojsa Vlajic.

The verbal offense is returning us to the darkest time of the communist dictatorship – Bishop of Raska and Prizren, Teodosije reiterated, assessing it as a „draconian“ punishment. He also emphasized that in a lawful society there is no place for double standards.

„With all due respect for all the war and post-war casualties in Kosovo, it is unacceptable for Serbs to be drastically punished on the one hand, while at the same time members of the former KLA who are suspected of numerous crimes against non-Albanians but also their own population, not only remain untouchable, rather, they are treated as heroes, with the most severe expressions of ethnic and religious intolerance against the Serbian people,“ the Bishop said.

There are also numerous reactions on social media regarding Todosijevic’s sentence. The organizer of the 1 out of 5 million protest in North Mitrovica, Marko Jaksic reminded of what he also sees as a double standard – when he was one of the people who filed charges against Kosovo Prime Minister’s brother Daut Haradinaj for saying that there will be no Serbs in Kosovo if his brother Ramush Haradinaj is extradited to Serbia.

SL: We are leaving the institutions if Todosijevic’s verdict is upheld

Srpska lista: Investigation against Todosijevic is another process by which Pristina wants to silence Srpska Lista and the Serbian people