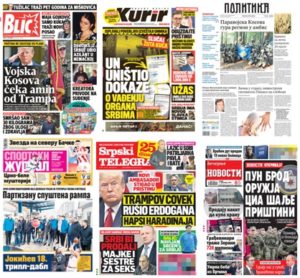 Serbian newspapers and tabloids continue to warn the public on their cover pages about the dramatic events and violence that are being prepared for Serbs in Kosovo, particularly in the north. Today’s front pages appeared with new alarming announcements. State officials also speak in a similar tone.

Informer tabloid announced a text about the opposition in Serbia with a headline: „While the Shiptars are threatening with war, Bosko and Djilas want blood“.

Vecernje Novosti daily, in its established manner, revealed insider information to the public: „CIA sending a boat load of weapons to Pristina, a blockade of the north is planned“.

However, this is not the only headline about the American influence on events in Kosovo.

Kurir tabloid reported a slight difference, an exclusive discovery that UNMIK’s confidential reports have surfaced and that „the UN has destroyed evidence on the organ harvesting of Serbs“.

Kosovo also appeared on the front page of a sports journal with the headline – „Ramp lowered for Partizan“, due to Partizan basketball players being banned from entering Kosovo yesterday.