SUMMARY: Since the Albanians don’t want status quo, it is a matter of time, that is, it is a matter of a day and a month until they attack the Serbs. There are two options for resolving the Kosovo issue – the recognition of an independent Kosovo – as seen by the Albanians and the international community – and the second possibility that has actually completely failed – the delimitation – the Serbian President stated during the parliamentary session on Kosovo yesterday. Despite repeatedly talking about alleged planned attacks on Serbs, the President then claimed that no “persecution” or “pogrom” against Kosovo Serbs would happen. He also added that he would leave a chance for a compromise – despite often sharing his skepticism of it ever happening. The people will have their say at a referendum – he stressed.

He addressed the members of his party and its coalition partners, a part of the formal opposition, the representatives of Srpska Lista and the diplomatic corps for almost three hours. The President was both welcomed and interrupted by applause. He received the longest applause at the very end of his speech.

The speech in its most significant part was about, as it was presented, Serbia’s gloomy future characterized by the loss of its population, outnumbered by Albanians. Also, in the introductory part of his speech, Vucic painted a miserable picture of decades-long emigration of Serbs from Kosovo, often blaming previous governments.

The President of Serbia also said he would admit that he is a traitor if an Obilic-type person appears who will – with a single act – return Serbia’s “holy land” under her patronage.

Below we publish parts of the President’s speech which do not concern the report of the Kosovo Office that he used for the basis of his speech, which KoSSev quoted earlier today.

It is a matter of a day, month and time until they attack the Serbs, the delimitation has completely failed

According to the President, there are two options for resolving the Kosovo issue – the normalization of relations between the Serbs and Albanians and the status quo.

„The Albanians, however, don’t want the status quo,“ he said, adding that „it is only a matter of time until they attack the Serbs“.

It is a matter of the day and month until they attack the Serbs, because they cannot stand it anymore. We can, but they can not

Speaking about the subject of normalization of relations, Vucic presented two possible options: “recognition of Kosovo’s independence” and “some sort of delimitation.”
He described the second option as:

„An idea that we failed in presenting and for which I was heavily attacked. Many talked about it before I did – in a much more favorable situation.“

For the fiftieth time tonight, I will repeat that they offered, a much more favorable situation, some kind of delimitation to save the healthy parts of Kosovo, to protect our people from further persecution, to preserve the entire Serbia, to improve it economically, to be able to work and to live peacefully in the future

He further claimed that this idea was the reason behind “the biggest (negative) campaign” led against him by both the West – “which was taught that Serbia should not get anything,” and by some of the „false patriots in Serbia who had already surrendered everything to them, who served them independence on a platter“.

Vucic confirmed that this idea „completely failed“ and that it „appalled“ the entire world, adding that they were all “appalled at the idea that the Serbs would get anything.“

Serbia does not have anything but health and education institutions in Kosovo, said the Presidents, but then: Not exactly

Although initially claiming that Serbia has no authority in Kosovo apart from health and education institutions, in a later part of his speech, Vucic said: “It’s not that Serbia has nothing in Kosovo.“ He added that he told the same thing to the international community and that he was then „attacked by the agents of the international community in various ways in all regional countries and here as well“ because of it.

The “existing situation” that is “untrue”

Although the President previously talked about the negative situation in Kosovo, primarily when it comes to Serbs, he then claimed that “judging by all research” the people in Serbia would prefer if “things remained as they are.” However, in his words, there is no “guarantee for it” and it is „unsustainable“.

The President noted furthermore that such a situation is “closer to the heart” of the Serbs, but that „it is untrue“. He did not provide details of this existing situation, nor did he explain how the „existing situation“ could be „untrue“.

Anyone who says that is not telling the truth to our people. I know that this is closer to your heart, but this is not true and I repeat, for the third time tonight, you can expect the Albanians to attack the Serbs if there is no compromise solution. This will happen because they are getting nervous, they are becoming more nervous, nervous about the tribunal, and that is why they established a tribunal for Serbs and that’s why they are doing all of this

Albanians will attack Serbs if there is no compromise solution, said the President but then also: There will be no persecution or pogrom

Vucic repeatedly pointed out that the Albanians will attack the Serbs if there is no compromise solution, stressing often that he is skeptical about the possibility that a compromise could be reached. Contrary to the claim, he also underlined that there would be no persecution or pogrom of Kosovo Serbs.

According to the President, the first problem is the fact that the Western powers – who have recognized Kosovo’s independence – „are absolutely determined to ride it out until the end at any cost and in every way.“

The second problem, in his words, are “the illegal actions of Albanians”, who are creating a new reality and trying to sell it as a new normality. The President cited the introduction of the 100% customs duties as an example of these actions. He also mentioned the tax several times during his speech, reiterating that Serbia would continue with the negotiations the moment the taxes are abolished.

He reiterated his skepticism when it comes to the possibility of a compromise several times. Nevertheless, he added that he would call a referendum should a compromise ever be reached and finally pledged for what he is calling a compromise, without more details.

Vucic also warned that “the worst scenario” would occur if there is no compromise and „the Albanians will attack our people in Kosovo.“

At the same time, he claimed that Serbia would not allow any pogrom and persecution.

Vucic further claimed that the highest international representatives are aware of this, which is „one of the reasons why there would be no persecution and pogrom of the Serbian people in Kosovo“.

The President also warned about a possible new instability arriving from some Bosniak politicians from the Raska region, who would seek a special status and abandon the army and police. He then sent a message „to the Bosniaks and Serbs that there will be no new instability,“ adding that the fact that he is „quiet“ and „pessimistic“ means that „there is nothing dangerous in it“.

He also talked about the need to improve relations with Northern Macedonia and Croatia.

Despite his prevailing pessimistic tone, the President managed to present plans for the future when it comes to resolving the Kosovo issue:

„While I am still the president, for three more years, if they abolish these taxes, I will do my best to try to find some sort of compromise solution that will include, not only the interests of our people, security, churches and monasteries, but also the interests of Serbia. I will advocate for some sort of compromise solution,“ Vucic said, nevertheless, pessimistically adding that it is possible “a compromise won’t be reached in the next five to ten years,” which would be a “disaster for both Serbs and Albanians.”

Vucic also spoke about the failures of previous Serbian governments and politicians when it comes to their Kosovo policy, but also about the negative natural population growth.

He claimed that if there is no agreement with the Albanians, Serbia would have a negative population growth of 2,693,000 people, which is „intolerable for Serbia“ and „something which we cannot survive“.

„Today there are 7.46 million Serbs in the Western Balkans, and about 4.07 million Albanians. According to UN estimates, if something does not change, there will be twice as many Albanians than Serbs by 2100,“ Vucic warned.

He assessed that women in Serbia “should give birth to 3.2 children” in order for a positive natural population growth to be achieved. Or we will have a small chance to talk about our own survival – he added.

…The future for our children

The President also stated that anyone trying to reach a compromise in Serbia is declared a traitor. He added that he is ready to call himself a traitor, if a new Milos Obilic (an ancient Serbian hero who fought against the Turks in the Kosovo battle) appears, who would, with one act, “bring Kosovo back to Serbia.”

Vucic finished his speech by sharing his vision of the future for the children of Serbia and quoting the words of the Serbian poet Borislav Pekic: 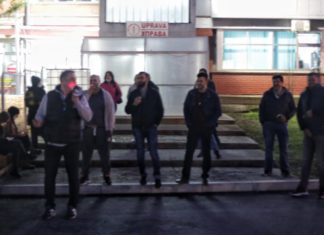