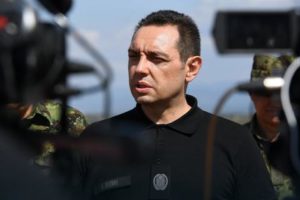 The Serbian Defense Minister, Aleksandar Vulin, stated today that he is in favor of “a delimitation with the Shiptars” occurring as soon as possible because Serbia will only then “be able to continue to deal with itself and its people.”

Vulin claimed that this is his personal opinion which does not have the support of the President or the government, recalling that the assembly never discussed it.

„I am in favor of delimitation with the Shiptars occurring as soon as possible… The sooner there is a strong and solid border between us and them, the sooner we will be able to deal with ourselves and our people, instead of dealing with what untried war criminals want to do and what they are doing. You know, if I used to have doubts that I might be wrong, now that I see that Germany, Croatia, Albania, the Shiptars in Kosovo, parts of BiH, Montenegro, Northern Macedonia are all against the delimitation, I have no dilemma that I am right and that this is good for the Serb people,“ the Defense Minister stated in Vranje today during a Labour Day celebration.

Vulin said in February of last year that „Greater Albania is the biggest threat to peace in the Balkans,“ and that its expansion “must be stopped in Kosovo.”

This is not the first time that the Minister of Defense publicly talked about his stance on delimitation. He sent an identical message at the beginning of April prompting the Serbian Military Union to file criminal charges against him for „endangering the territorial integrity and betraying the country.“

“When we determine where the line is, we will be able to defend it,” Vulin told the Belgrade daily newspaper Vecernje Novosti in April and warned:

“It is coming and it came, ‘Greater Albania’ is here. Now it is a question whether we will stop it or wait for it to reach central Serbia.”

Vulin is not the only Serbian official who is advocating or has advocated this idea.

Serbian Minister of Foreign Affairs Ivica Dacic stated in February that delimitation is Serbia’s official proposal for resolving the Kosovo issue. However, a day later he explained that he actually wanted to say that this was in fact „one of the official ideas.“

Serbian President Aleksandar Vucic also spoke about this „official idea“ in the past. At the beginning of April, he explained that the delimitation is „an idea that could lead to a solution,“ adding that „it is not happening – the Germans do not want it, the Albanians do not want it.“

„I fought for delimitation knowing that this is the maximum we can obtain. Now we know that we cannot. In historical terms, I will not be guilty of anything, maybe it is easier for me personally, but it will be harder for Serbia,” the President told TV Pink before the recent summit held in Berlin.