„We will not return to the 1990s, although some would like to return us to a much more terrible period than the 1990s, which are the 2000s – the era of crime, robberies, and unpunished murders on the streets every day. But we do not want either the 1990s or the 2000s. We want to live with the highest growth in Europe” the Serbian President Aleksandar Vucic described his politics on Sunday.

He believes it is likely that an agreement between Belgrade and Pristina will not be reached. It is terribly important for him, however, that everything he said is recorded.

„Because it will go down in history what we, at some point, could have had, but it is what we as Serbs, have gambled away, like the countless times before. It is personally important to me, and I knew that as being rather alone in this fight I may never succeed, but it is important for me that it is data tacked in history,“ said the President.

Vucic asked the opposition to read the Brussels Agreement.

“With the Brussels Agreement, we avoided support for Kosovo’s entry into the UN, and we have avoided a prank where the north of Kosovo regional police is composed of people as per this communist district, which the north of Kosovo is, with 70 ethnic Albanian policemen and 30% Serbian. So at present we have 98% Serb policemen in the four northern Kosovo municipalities,“ he explained.

Vucic accused the opposition of drawing borders between Serbs and Serbs in Jarinje and Brnjak.

“We do not think there are borders between Serbs and Serbia everywhere. Let us try to fight for something, and return something to our people that you have lost. But they (the opposition) will not allow it, and they want to insist, at any cost, on the independence of the entire Kosovo. And you all understand this and you all know this. You are just pretending that you don’t, and that’s why some of them ask these questions today,“ Vucic said.

When asked by a journalist about the “criticisers” who are also “speaking against the border change and threatening conflicts on a BBC show”, Vucic said, after visiting Corridor 10, replied:

„It is only important that you tell the citizens of Serbia that there is no difference between Rada Trajkovic, Momcilo Trajkovic, Ramush Haradinaj and the afore mentioned Mr. Dimitrov, and I do not know who else took part in that show.“

Vucic described them in the following manner:

„They all think that the entire Kosovo is independent. Therefore, they do not think that these are Serbian borders, but they think that these are the borders of an independent Kosovo state. So, they think and want that, if I may interpret this for you, they don’t want Serbia to get anything in Kosovo. They don’t want us to get anything in Kosovo and they think it would be a crime for Serbia to get something. So, let me interpret this for you, what they are saying to get some sympathizers in Serbia because, no matter how many times you ask them where the Serbian borders are, they will not tell you, including certain priests, not all, 99% of them are honorable, honest and responsible persons. You can take a hammer and pound all you want, keeping them awake till dawn, and torture someone –they still wouldn’t say that Kosovo is Serbia, or any part of Kosovo, not on their lives. They say Kosovo is whole and independent, and we are against those who would like to preserve something for their country.“ 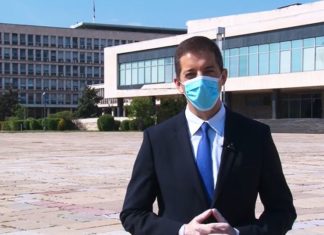