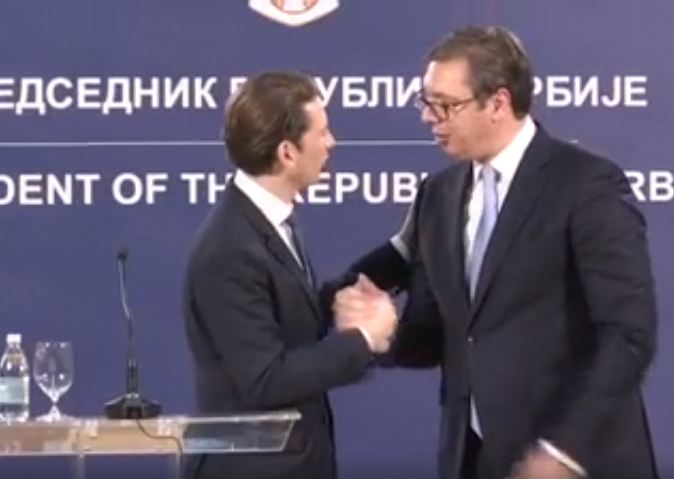 The attempt to find a compromise solution with the Albanians is of vital importance for the Republic of Serbia, which is, at the moment, supported by a small number of people in Serbia, President Vucic said during a joint press conference with the Austrian Chancellor Sebastian Kurz in Belgrade. Vucic’s claim was based on the results of Demostat research. Demostat, however, says that 61 percent of Serbia’s citizens „disagree with the idea of exchange of territories that would involve the exchange of North Kosovo for the Presevo Valley,“ while Vucic used this figure to refer to „the people who oppose any binding agreement with the Albanians.“

„But let me tell you, in 2014, and 2015, when we started with difficult reforms in the country, no one was in favor of those difficult reforms, and today when people see these results, I suppose we would have 70 and 80 percent support,“ Vucic said.

Serbia wants a compromise, as the Albanian side cannot get everything, he repeated once again.

The compromise is guaranteed peace in the next 100 years

„Yes, we have our Constitution and one of the highest legal acts of our country says one thing, but when I want to go to Kosovo and Metohija, I am greeted with some crossings and borders between Serbs and Serbs, which have been placed there since 2011by some people, and that is why I said it is important to establish borders in accordance with the joint will of Albanians and Serbs, in line with a compromise solution.“

„And we only need 20 years of frozen conflict with Albanians and no one will remain in the country. The fact that someone else will empty their territories before we do – Albanians, Croats and Bulgarians, and I do not know who else. What does that mean to us? In the end, we will also be left without people. Why would we need the territory without the people? He claimed that for the first time the population of Belgrade is decreasing despite 30,000 immigrants annually.“

„No one will remain in the Balkans because of our bad economic circumstances and our discord and conflict. We must try to find a solution for Serbs and Albanians, and if we could find it, then that would be a guarantee of peace for the next 100 years, and that is what we really want, but it takes two for a compromise, which has not happened so far,“ also said Vucic.

Vucic, however, reiterated that there is still no solution for Kosovo, recalling that this is a solution between Serbs and Albanians.

Austrian chancellor urged for the finalisation of dialogue between Belgrade and Pristina, claiming the solution to Kosovo must take place prior to accession of Serbia to EU.

„People in Serbia must understand that the basic prerequisite for EU accession is a solution to the relations between Belgrade and Pristina,“ said Sebastian Kurz.

Austria will support a peace agreement between Kosovo and Serbia, was his answer to the question on delimitation.

It is important for us to have a peaceful coexistence, to keep the past in the past and to have stability and peace in this region, not destruction and war

Kurz said that he is impressed with „Serbia’s impressive economic growth of 400%“ and with the contribution of Aleksandar Vucic, adding that he „wished that same success for Austria and other EU countries“.