A single reply by Viola von Cramon to her own tweet shared following her meeting with Bishop Grigorije drew a lot of heat in the public. The since-deleted tweet caught headlines in Serbian tabloids and reactions from the Serbian president and the Serbian Orthodox Church.

“We have received many strong protests and expressions of discontent over yesterday’s announcement by German politician Viola von Cramon, given after a conversation with the Bishop of Düsseldorf kyr Grigorije, that there is no Serbian Orthodox Church in Germany, and we are obliged to, for the sake of truth, issue the following statement: The Serbian Orthodox Church exists in Germany, as part of the one, indivisible autocephalous Serbian Patriarchate. The Constitution and Statutes of the Serbian Orthodox Church are valid in the territory of Germany as anywhere else in the area of her canonical jurisdiction, and all church–hierarchical bodies are obliged to be governed by them. On the basis of the Constitution of the Serbian Orthodox Church, the competent church authorities appoint and dismiss the administrations of all bodies and organs, and the Holy Assembly of Bishops appoints and, if necessary, relieves the diocesan bishop,” reads the latest press release of the SOC.

Von Cramon “did everything to destroy Serbia”, and you can “deduce how she concluded that the Serbian Orthodox Church does not exist”, the Serbian president said earlier today. Vucic, however, also noted that he „does not have to say anything more“ because, in his words, every smart person can understand this very well.

Prior to these reactions, the harshest headlines could be read in the pro-governmental media and tabloids: „SCANDAL Viola von Cramon abolished the SOC“, Viola von Cramon: „There is no Serbian Orthodox Church“, „Grigorije is the greatest disgrace of the SOC: He met with Viola, the main lobbyist for INDEPENDENT KIM (PHOTO) “etc.

Bishop Grigorije and the rapporteur of the European Parliament for Kosovo, Viola von Cramon, met yesterday at the seat of the SOC diocese in Dusseldorf, Germany.

“Constructive and open discussion with Bishop Grigorije, Serbian Orthodox Church diocese of Düsseldorf and all of Germany, on common challenges and inter-religious dialogue in the Western Balkans and Germany,” Viola von Cramon tweeted after the meeting, while also sharing a photo with Bishop Grigorije.

The panel in front of which they were photographed contains the SOC logo and its name in two languages – Serbian and German „Serbian Orthodox Church, Diocese of Dusseldorf-Germany“.

In a subsequent statement of the Diocese, Bishop Grigorije confirmed that he informed von Cramon about the functioning of the Diocese he heads and his engagement in interreligious dialogue within German society. The Bishop also revealed that he asked her and her fellow MEPs to call on Kosovo authorities to implement the decision on the return of land to Visoki Decani.

A heated debate followed as soon as von Cramon tweeted on the meeting, while Albanian Twitter users objected to this meeting, Serbian users criticized both von Cramon and Bishop Grigorije.

When von Cramon tried to respond to the criticism of one user that the „SOC is a pro-Russian entity“, saying that the structure of dioceses within the SOC is rather more independent, she also tweeted the following:

„There is no ‘the Serbian Orthodox Church’, these are very autonomous dioceses, different to the Catholic Church. Speak to the Bishop and you will be surprised.“ 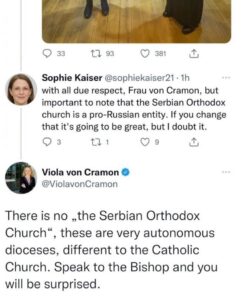 She deleted this tweet in the meantime. However, it was too late, as it had already reached the headlines. The photograph she published did not help, neither did her original tweet:

“Constructive and open discussion with Bishop Grigorije, Serbian Orthodox Church diocese of Düsseldorf and all of Germany, on common challenges and inter-religious dialogue in the Western Balkans and Germany.”

This is not the first time Bishop Grigorije was under attack from Serbian tabloids and pro-governmental media. He is also known as someone who openly points out problems in society and the church.

Constructive and open discussion with Bishop #Grigorije, #Serbian #Orthodox #Church diocese of Düsseldorf and all of Germany, on common challenges and inter-religious dialogue in the #WesternBalkans and #Germany.

Let’s use what unites us for the betterment of all. pic.twitter.com/SgyhXrPFdB