Under pressure from the Trump administration and with President Trump dangling a White House peace ceremony, Kosovo’s president has pledged to take a major step toward resolving an escalating standoff with Balkan rival Serbia.

Trump has made an unusual direct appeal to Serb and Kosovar leaders as 10 years of hostilities threaten to boil over into armed conflict and as his administration pursues a previously undisclosed back channel to ease tension with Russian-backed Serbia.

Kosovo President Hashim Thaci made a previously unreported diplomatic trip to Berlin last month, where he met with U.S. Ambassador Richard Grenell, a Trump confidant. Thaci pledged then that he would reverse course on punitive tariffs imposed on all Serb goods.

In an exchange with The Washington Post on Friday, conducted in English over email, Thaci said he is “ready to consider lifting the tariffs if a clear way to proceed towards reaching a Final Peace Agreement with Serbia is opened for Kosovo.”

The tariffs imposed last month — a move that has infuriated Serbia and Russia and alarmed the European Union — were accompanied by threats from Kosovo to raise a standing army over apparent violation of its agreement with NATO, which maintains a small defense force in Kosovo a decade after its separation from Serbia and formation as a sovereign country.

Serbia has never recognized Kosovo’s independence and has warned of an armed intervention over the latest disagreements. Russia considers the vital role that the United States played in creating the country to be illegitimate meddling at its doorstep.

“Yes, tariffs are an exceptional measure,” Thaci said. “The willingness from our side to do away with it is there. It becomes a stronger resolve if we feel support and guidance from our partners in this. For my part, I will reassure the Kosovo people that guidance and support is totally there.”

Thaci’s view, which has not been previously reported, comes at some political peril as nationalist tensions spike. He cannot reverse the tariffs on his own and he faces internal opposition from Kosovo’s prime minister, his sometimes political rival. But the United States considers his overture a first step toward stopping a tit-for-tat escalation over the past two months and a potential return to what had appeared to be the most fruitful efforts in a decade toward a final peace accord.

“Kosovo’s friends and I share a clear and vivid understanding of the enormous challenge we have in front of us in terms of doing what we are called to do by our conscience, and by our historical duty — to make peace possible and viable,” Thaci said.

Trump sent personal letters to the leaders of both countries last month, urging them to return to peace talks and offering the possibility of a joint White House invitation. Although the White House has not widely discussed the outreach, Thaci and Serbian President Aleksandar Vucic published their copies online.

“Failure to capi­tal­ize on this unique opportunity would be a tragic setback, as another chance for a comprehensive peace is unlikely to occur again soon,” Trump wrote to the Kosovar leader.

“We stand ready to assist your efforts to reach an agreement that balances the interests of both Kosovo and Serbia. Such an agreement is within reach. I look forward to hosting you and President Aleksandar Vucic at the White House to celebrate what would be an historic accord,” the letter to Thaci read.

Both leaders said they took the letters as a sign that Trump is willing to take a more active role as mediator, although U.S. officials said they maintain a hands-off approach.

“For resolving a complex and difficult issue like the generations- [and] even centuries-long conflict like this, strong leadership is needed,” Vucic said in an interview. “The participation of great powers with influence in the region is a must. As the leader of one of world’s great nations, one with deep involvement in the region, I am sure President Trump could make an important contribution to resolving this conflict.”

Vucic expressed skepticism that Thaci is sincere about reversing tariffs and said Thaci and his prime minister are playing a self-serving game of “good cop, bad cop.”

“Try to put yourselves into our shoes,” Vucic said. “What would you want if you were in our place? We want the best relations possible, reliable partnership and also some breathing space, so we can look after our own interests. In return, we offer genuine and reliable support for peace and development of this part of Europe, and mutual respect.”

Grenell urged normalization of the Kosovo-Serb relationship and direct negotiations between the two countries when he met with Thaci, U.S. officials said. He also raised concerns about gay rights in Kosovo, including light prosecution of violence against lesbian, gay, bisexual and transgender people, U.S. officials said.

He has not met individually with Vucic.

Grenell was a spokesman and adviser for now-White House national security adviser John Bolton and other U.S. ambassadors at the United Nations during the George W. Bush administration. He was a conservative foreign policy commentator before taking up his post in Berlin last year. Thaci said he has a close relationship with the U.S. ambassador in Pristina, Kosovo’s capital, but approached Grenell separately as “Trump’s go-to person in Europe.” He traveled to Berlin with three aides on Dec. 21, a few days after he received Trump’s letter.

“President Thaci and I spoke about the importance of making long-term decisions instead of reacting in the short term. I was pleased that he agreed and committed to work to end the tariffs that were recently imposed on Serbian products,” Grenell said in a statement to The Post. “This move would help send the right signals that he is serious about negotiating and help build trust between the parties.”

Thaci called Trump’s communication “groundbreaking” and said U.S. support for Kosovo is vital to its future. Kosovo’s 2008 birth was a passion project for many conservative advisers to Bush, a few of whom now work for Trump, but Trump himself had not previously indicated detailed views on the Balkan conflicts.

Bolton said in August that the United States would not oppose mutually agreed land swaps then being floated by Serbia and Kosovo as a way to reach a final accord. That put the Trump administration at odds with Germany and numerous other E.U. nations that fear any realignment of borders could reopen conflicts that ripped the Balkans apart in the 1990s.

But talk of a grand bargain between Kosovo and Serbia fizzled last fall, and each nation hardened its positions.

Kosovo Prime Minister Ramush Haradinaj, writing in The Washington Post on Nov. 28, defended the 100 percent tariffs on Serbian goods as a defensive action “in the name of fair trade, national security and our vital national interests.”

Trump sidestepped the issue of land swaps in his letter, but his language suggests he would accept a redrawn border if both sides agreed to it.

“President Trump’s letter made many things clear in a situation that until recently was marked by a growing sense of confusion and uneasiness because of a whole array of contradicting positions, statements, and ideas in relation to Kosovo and Serbia,” Thaci said.

He urged bilateral talks “with the U.S. in a leading role in coordinating international input for the final Peace Agreement that will bring recognition of Kosovo by Serbia.”

“There is real potential right now to solve one of Europe’s last remaining territorial disputes,” said Vajdich, president of strategic advisory firm Yorktown Solutions and a fellow at the Atlantic Council.

“The U.S. strategic interest is to settle a dispute that Russia uses to blackmail Serbia into submission and keep the Balkans perpetually destabilized,” Vajdich said. “Solving the Kosovo question would virtually eliminate Russia’s leverage over Serbia and its influence in the Balkans. Achieving this should be one of the U.S.’s core interests in Europe.” 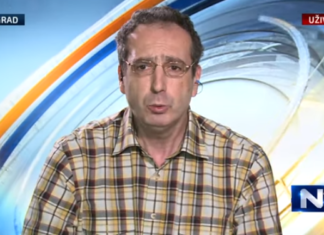