The members of the ROSU Special Police Unit arrested four Serbs in North Mitrovica early this morning. Three persons (N.S, M.R, D.M.) were arrested in connection with the investigation into the murder of Oliver Ivanovic by the order of Kosovo Special Prosecutor’s Office, while the police are still searching for the fourth suspect, M.R. The fourth person (S.A.) was arrested for causing an incident with police this morning – a Special Prosecutor in the investigation of Oliver Ivanovic’s murder, Sylë Hoxha, confirmed for KoSSev. The news was also confirmed by the Kosovo police via a press release and in an early morning statement by spokesperson Daut Hoxha to KoSSev.

A meeting of the highest state officials, including the BIA and military leadership was followed by consecutive meetings with the Russian and Chinese ambassadors, are currently taking place in the Presidency in Belgrade since the early morning. Numerous media crews are waiting in front of the President’s premises for an address. The Government of Serbia also met in the early morning hours before the meeting at the Presidency.

An air raid siren could be heard sounding for more than an hour in North Mitrovica early this morning, which caused a great disturbance among the citizens. Several gunshots were also heard after 6 am, as well as short bursts of gunfire from the city center.

According to recordings and several testimonies, a raid was carried out this morning in Cika Jovina Street, in the building where Restaurant Grey is located.

Srpska Lista Vice-President, Igor Simic told RTS that „the same scenario of brutal force, abuse of people, intimidation, and stun grenades“ were used during the arrest.

„The Kosovo police is justifying the actions as a police investigation into the murder of Mr. Oliver Ivanovic, which is a brutal lie because they are trying to mask what they are doing in the field, which is the intimidation of the Serb population in the north of Kosovo and Metohija,“ Simic said.

„A police operation was conducted in the north of Kosovo today by the order of the Special Prosecutor’s Office of the Republic of Kosovo in order to arrest the suspects for the murder of Oliver Ivanovic. The police action was fully in line with the law and order of the Special Prosecutor’s Office and is in no way related to political affairs. I want to assure all citizens that the state of Kosovo and its organs of order will not in any way direct actions against certain political or ethnic groups. I call on citizens, political parties, mayors, especially those in the North, and other institutions to contribute to the maintenance and improvement of public peace in the interest of peace and stability. It is important that no one falls victim to various disinformation. Maintaining order and respecting the law is in the interest of everyone in Kosovo,“ he posted on his Facebook profile.

Srpska Lista crisis management team held an emergency meeting this morning bringing four conclusions, requesting an immediate release of the arrested Serbs, the abolishment of the customs taxes and to maintain peace and order.

Zubin Potok Municipal President, Stevan Vulovic, municipal leaders and public utility companies held a meeting and agreed on measures as a response to the new crisis in Kosovo, reported RTS.

They announced that all stores would be closed from 12 to 13 o’clock today, with the exception of public institutions, schools, kindergartens, and announced a blockade of the Brnjak crossing, as well as the main road in the village of Zupce during the same period.

The protest was planned in the midst of the latest tensions between Pristina and Belgrade since the Kosovo government raised customs tax on goods from Serbia to 100%. 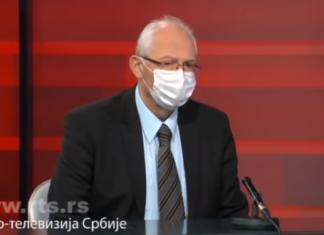