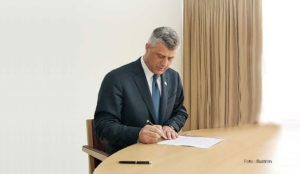 Shortly after the Kosovo President made this decision, Kosovo Prime Minister, Ramush Haradinaj reacted on Facebook, calling on political entities to run and vote for „those who will work for their benefit“.

„The President of the Republic of Kosovo, Hashim Thaci reached a decision today and announced the date of early elections for mayors of the municipalities of North Mitrovica, Zubin Potok, Leposavic and Zvecan, in accordance with his constitutional and legal competences, and taking into consideration a letter from the Ministry of Local Self-Government and Administration, following political consultations with political parties and the Central Election Commission,“ the statement reads.

Thaci unexpectedly appointed eight members of the Central Election Commission (CEC) ten days ago, including one member of Serb ethnicity, which has not been functional for a full year. The sudden decision arrived after the public call of the US embassy in Pristina for Thaci to „immediately appoint“ members of this institution whose functioning was blocked in early 2018 after the mandate of the former members expired.

The mayors of the four Serb-majority municipalities in the north resigned on November 27th of last year, after special Kosovo police units carried out an arrest operation over the murder of Oliver Ivanovic – as Kosovo Prosecution and the police claimed. The mayors, however, stated that the resignations were the result of Pristina’s introduction of 100% tax increase on goods from Serbia and Bosnia. Kosovo media reported on several occasions that Serbian mayors continued to receive salaries from the Kosovo budget despite handing in their resignations.