An agreement between Belgrade and Pristina must be sustainable, implementable and must contribute to the stability of the whole region.  And it must be supported by the people on both sides. Germany does not believe in an agreement where the  implementation of which involves the exchange of territories. There should rather be a well structured negotiation process which covers all open issues. Therefore it should be about content rather than a time limit. While the agreement should not be rushed, time is essential as the dialogue should restart as soon as possible, said the newly appointed director of Southeastern Europe, Turkey and EFTA countries of the German Foreign Ministry, Susanne Schütz. In an interview with KoSSev, she spoke during her first official visit to Pristina, after having been German Ambassador to Albania from 2016 – mid 2019.

Where is the Balkans today and where will it be 2 years from now?

The Western Balkans for Germany is a very important part of Europe. In 2003 the EU gave an accession perspective to the entire Western Balkans. We want to confirm that the  EU perspective also remains today because we think it is really important that the EU will eventually take these countries as its members. It is important not only for the region but also for our own stability, for the stability of Europe and for the future of Europe. It is about the standards and values of the EU and since the Western Balkans are already territorially inside of the EU, it is therefore also in the interest of the EU not to leave this region outside politically and economically. Therefore, this process will continue for the entire Western Balkans, including Kosovo also.

For Serbia and Kosovo to eventually become members of the EU, it will be important to come to an agreement, as the normalization of their relations is an integral part of the negotiation process of the EU with Serbia.

How lonely does Germany stand in its claim that the place of the Western Balkans is in Europe? In particular, concerning the latest developments in North Maceodnia, for instance? Are you alone in such pledges?

No, not at all. The EU perspective was reconfirmed at the EU-Western Balkans summit in Sofia in 2018, and it remains a very important aim for all EU member states. Also France has acknowledged that they are firmly behind the EU perspective. What they are saying is that they would like to look into the methodology of the enlargement process and improve it. On the basis of the Commission’s suggestions the EU member states will come back to this issue very soon – probably at the end of January or in February. At the same time, the EU integration process of North Macedonia and Albania should go ahead.

Speaking of European values brings me to my next question: Can Germany still claim that the current regimes throughout Balkan countries are a stabilocracy? Are the Balkans’ leaders still a guarantee for peace in the region as used to be described in the past years by IC? How does that go with European values?

I would like to answer differently because stabilocracy is not the issue. We firmly believe in the importance of transparent, free and fair electoral processes. This is the basis for governments to come into power and to act. This is why we are observing electoral processes in the entire region very carefully. At the same time, I think it is important for voters to make use of their voting rights responsibly, and for political parties to participate, rather than boycott elections. As a result, governments should be formed reflecting the will of the voters.

To rephrase the questions: Would you describe the current regimes throughout the Balkans as de facto democracies or the authoritarian regimes, i.e, nominal democracies with autocratic elements of governing the countries?

We have to acknowledge that in this region we are dealing with still relatively young democracies which not so long ago evolved out of non-democratic dictatorships. This is why they still have to learn a lot, for example, how to deal with and how to respect opposition. In pluralistic democracies you need lots of voices. You need a majority and you also need to respect the rights of the minority, you need to have free media. The countries here in this region are still in the process of learning such important aspects. The EU is looking carefully into these topics and regularly evaluates progress in the commission’s annual country reports. At the same time the EU is giving a lot of support for improving democratic standards, for example, vis-à-vis media freedom or minority rights as they are important elements. 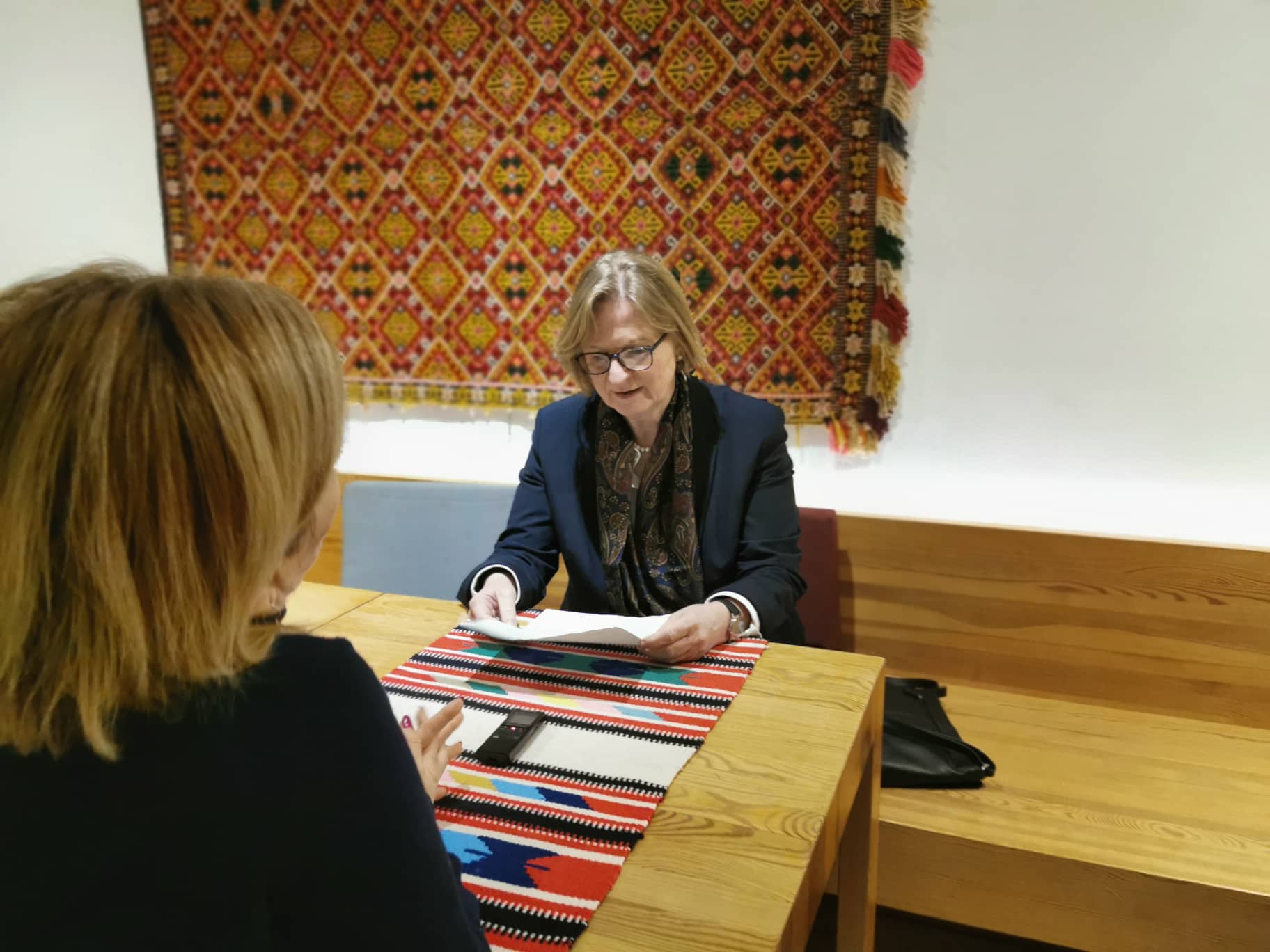 Speaking of the reports on fulfilling criteria, how well you are informed about the position of Kosovo Serbian community within the Kosovan systems in regard of enjoying the guaranteed rights, or rule of law?

During my visit I have spoken also to representatives of the Kosovo Serbian community who have informed me about the many problems they are facing. I am convinced, that for Kosovo to be a multiethnic society – and this is also written into the constitution -, minority rights and the full integration of minorities need to be given more attention. This applies to the Kosovo Serb community which enjoys extended rights enshrined in the Kosovar constitution thanks to the  Ahtissaari Plan.

How would you describe the current communication between Germany and US and Germany – France on the Kosovo issue? What has been happening recently? Is there any active diplomacy? Apart for the appointment of Mr Grenell, we have not seen much other activities?

The EU member states together with the EU Commission and the European Union External Action Service as well as the so called Quint countries, including the United States, are in constant and very close exchange over the developments in the Western Balkans. We all meet regularly, have regular telephone conversations. We exchange positions and indeed we are working very closely together. Because we know that for supporting developments in this region it is import for the International Community to stay united. The nomination of Ambassador Grenell shows that the Western Balkans and in particular the Kosovo-Serbia issue remains very important to the US.

How soon may the Belgrade- Pristina dialogue start?

As there has not been a dialogue for more than a year, we believe, that the dialogue has to restart as soon as possible. For that, it takes resolve and political will on both sides and we think that this is an issue that needs a well structured negotiation process as well as well informed negotiation teams. Also the EU as the facilitator of this dialogue needs to strengthen its capacities to support the negotiations over the entire range of issues. You are more aware than myself of the wide scope of issues which have to be solved. As I said, it is important to come to an agreement not hastily, because an agreement, we believe, has to be sustainable and has to contribute to the stability of the entire region. We don’t believe in simple solutions. However, both sides should not lose more time and restart the dialogue as soon as a government has been formed in Kosovo.

There is no time limit. There has to be an agreement and there has to be an agreement which can be implemented, which has to be supported by both sides and peoples because it has to create stability here in this region. There has to be at the same time the political will and it has to be seen as the priority because, by not solving the issue, the situation will not get better but more and more difficult if you just leave it to be solved later. Also the issue of real integration of Kosovo Serbs in a multiethnic Kosovo state is an issue which will not become better by not solving it but will rather deepen the problems.

The elections were judged mostly transparent as well as free and fair – with some exceptions – by the European observer mission. Now it is up to the parties to form a coalition which will represent the voters’ intention and use their mandates in the interest of the Kosovo people. I am not in the position to judge the coalition negotiations. All I can say is that we hope that a government will be formed soon so that government work can continue. And of course, we would hope that such a government will be able and willing to overcome differences and personal issues in the interest of the country. As I said, there is the dialogue with Serbia, which we hope will be high on the priority agenda. But there are many other important issues, bilateral issues, reforms and their implementation – with a strong focus on rule of law, the fight against corruption and fight against organized crime. And there is the budget which will have to be agreed by March .

Mrs Schutz, thank you for talking to KoSSev.