More than 65% of respondents – out of a total of 1,140 who participated in the poll shared on KoSSev’s social network pages in the past 24 hours – say that citizens from the north will not be removing their KM plates and registering their vehicles with RKS documents.

The Kosovan government is set to start implementing its latest decision on the re-registration of vehicles with Serbian plates from towns in Kosovo to Kosovan RKS plates this Monday.

In practice, the decision mostly refers to vehicles, approximately 10,000 of them, with KM plates used by the citizens of the north.

Even though vehicles with KM plates could not venture south of the Ibar for several years now, for the overwhelming majority of citizens in the north they were the only ones they used.

In addition to this decision, the Kurti-led Kosovo government announced on June 29th that it will start issuing a declaration sheet to Serbian citizens entering Kosovo with ID documents issued by the Serbian authorities from August 1st. This declaration sheet will be issued at all air and land crossings and it will be valid for 90 days from its issuance.

Since these decisions were announced, Kurti addressed Kosovo Serbs via a video message in their native language on two separate occasions – in early July and this Saturday.

In addition to emphasizing that everything is ready for the start of the implementation of decisions, he called on citizens to „trust their government.“ Kurti also urged them to understand what the rule of law means, as well as reciprocity and that they are aimed at “protecting the citizens of Kosovo”.

Instead of giving instructions to the Kosovo Serbs regarding the issue, official Belgrade has repeatedly been sending dramatic announcements. In early July, Vucic said that the Albanians plan to expel the Serbs from the north by the end of October and that a new Storm will follow. On Saturday, the Serbian Minister of Foreign Affairs alerted that Albanians are „literally preparing hell for the Serbian people in the coming days“. Also, the acting head of the Kosovo Office, Petar Petkovic, warned on the same day: “Kurti is leading us to a most complex situation, which threatens to become a crisis with unforeseeable consequences and turn into a cataclysm.”

In addition to the lack of clear instructions in public, Belgrade has yet to confirm any possible measures it would be expected to take in such a situation to protect its own citizens from a Storm, hell, and cataclysm.

In the polls posted on KoSSev‘s Instagram, Facebook, and Twitter pages, we asked readers whether they would be replacing their KM plates with Kosovan ones. Four answers were given – „I will“, „I won’t“, „If I have to“, „I expect instructions from Belgrade“. On Facebook, due to technical difficulties, users could only choose between two options „I will“ or „I will not“.

Out of 1,140 respondents, 65.03% answered that they would not. Those who intend to do so make up 15.3%. Fifteen percent say they will do so if they are forced, and another 15% reveal they expect instructions from Belgrade.

The largest number of responses came via a poll posted on the Instagram story – a total of 668, with 63% saying they do not intend to remove their KM plates. 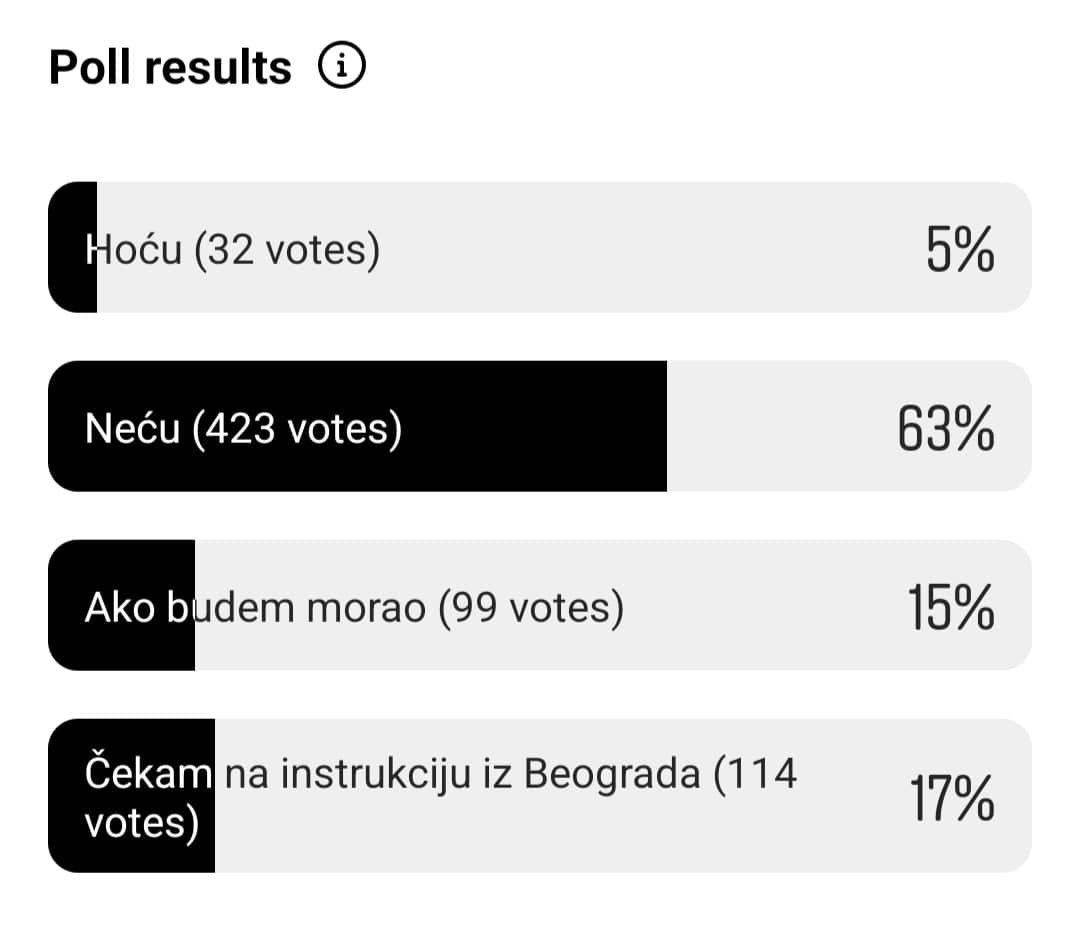 The Facebook story received 425 responses, with 87.1% of respondents answering that they would not be replacing their plates. 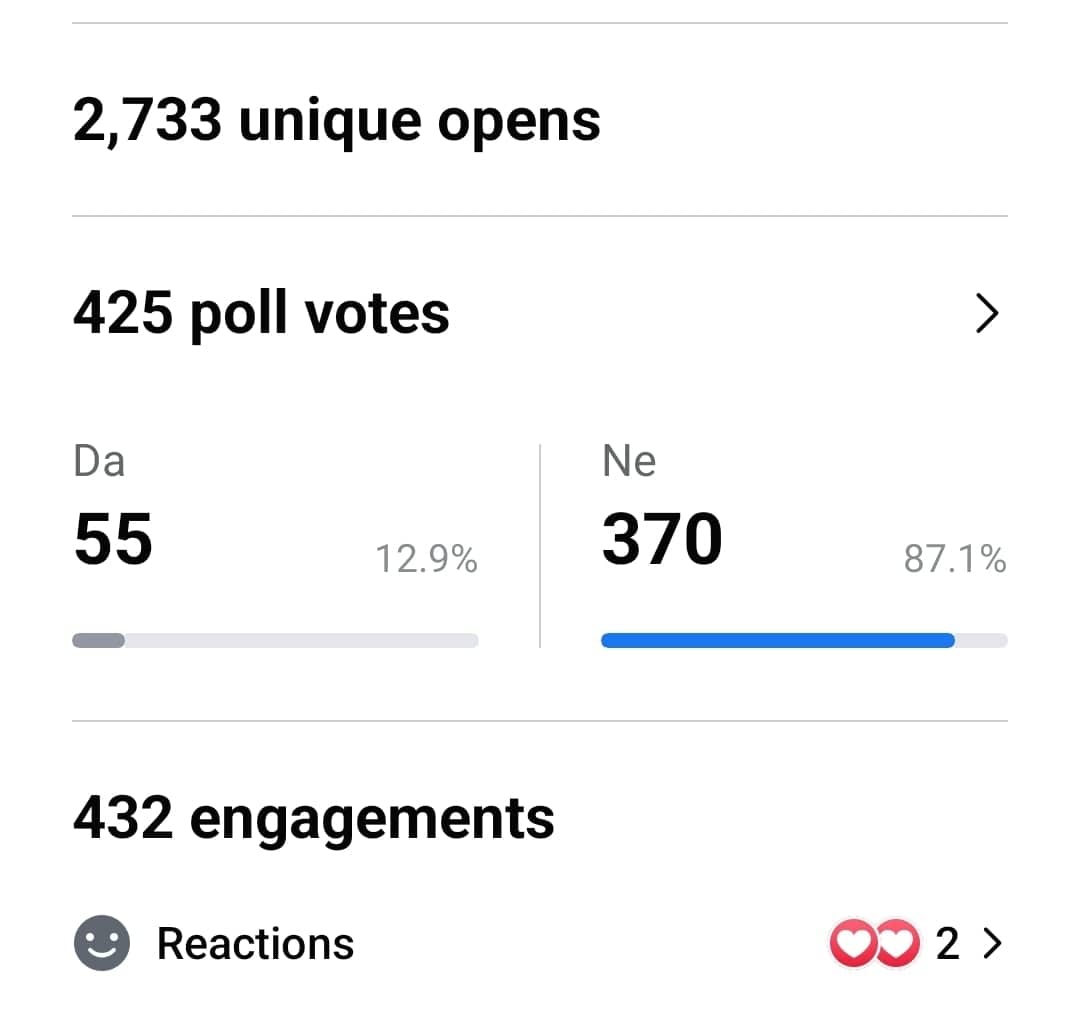 The smallest number of responses arrived on Twitter, only 47, with differing results when compared to Instagram: 28% intend to re-register, 45% do not intend to do so, 15% if they have to and 13% will wait for instructions from Belgrade. 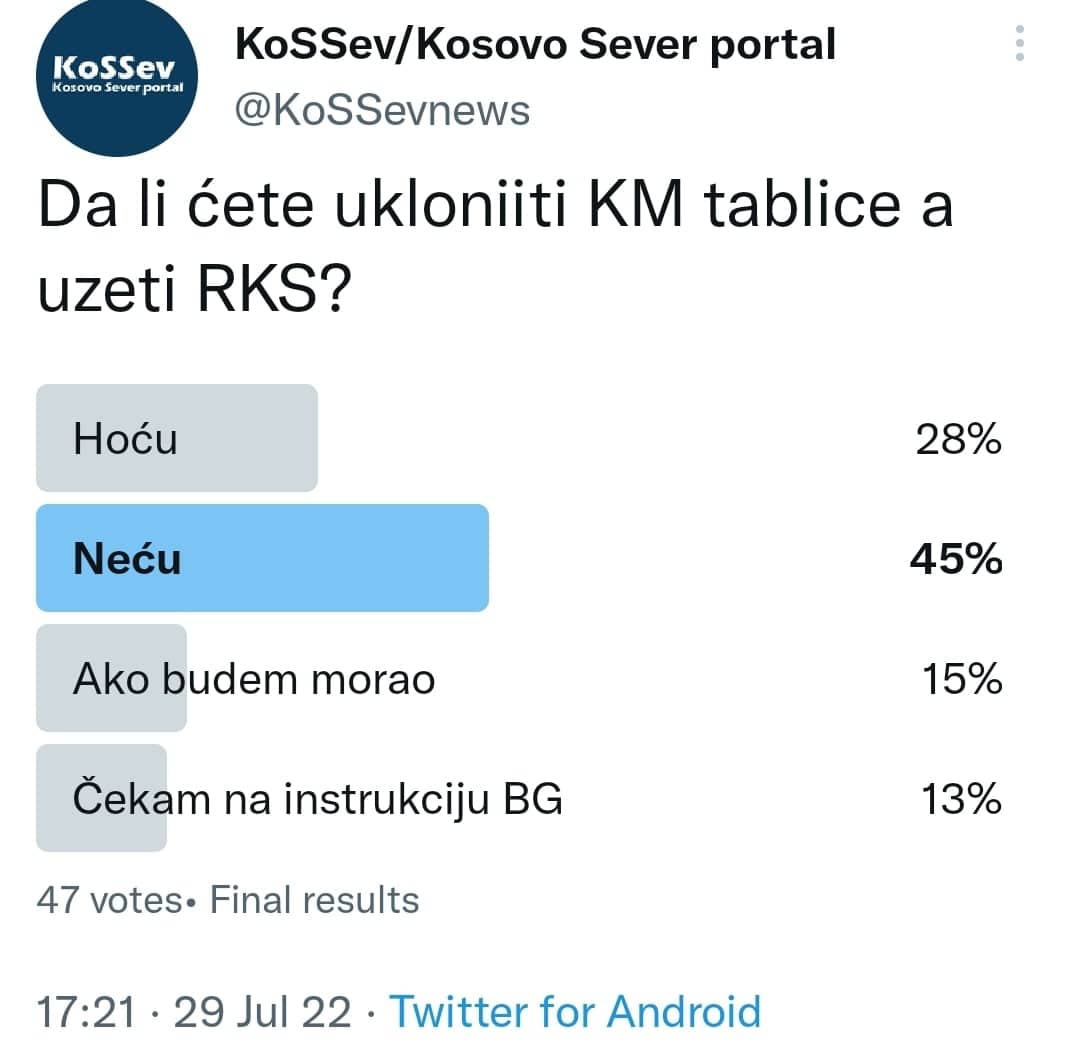 After meeting with Srpska Lista representatives in Belgrade yesterday, the President of Serbia will address the public today regarding the latest situation.