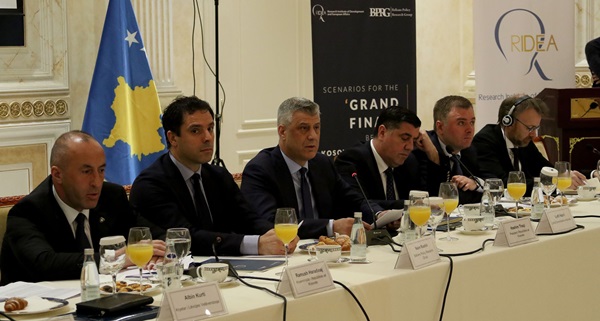 Hashim Thaci stated on Thursday during a conference with top officials and international representatives in Prishtina that he expects there will be a “high-level political agreement” signed between Belgrade and his government that will serve as the culmination of the ongoing EU-facilitated dialogue between the two.

“I am convinced that the time has come for a broad political and historical agreement between Kosovo and Serbia,” he said in his address to the panel, stating that there is “less and less patience” for a continuation of the talks in Brussels.

This sentiment was echoed by the US Ambassador to Kosovo, Greg Delawie, who said that “progress needs to be made” within this year and that a certain “fatigue” could be noticed in the dialogue in the past couple of years. He reiterated the support of the United States for the dialogue, citing positive outcomes such as “the integration of the judiciary in the north” and “the integration of the police force”.

The conference, titled “Scenarios for the 'Grand Finale' Between Kosovo and Serbia”, was organized by the Balkans Policy Research Group and the Research Institute for Development and European Ideas (RIDEA), included panelists such as Kosovo Prime Minister Ramush Haradinaj, Vetevendosje leader Albin Kurti, and the Norwegian ambassador to Kosovo, Per Stran Sjaastad, among others.

Haradinaj directed sharp criticism at Brussels during his speech, saying that the EU should consider getting “outside help” in case it is unable to find solutions for the topics tackled in the dialogue:

“If official Brussels does not have the capacity to wrap up this topic it should ask for help, or if it does not want help, it should tell us what to do and we can deal with the issues in our own way as we did in the past.”

“Brussels should not be ashamed to ask for help”, he reiterated.

The Kosovo government was also not left unscathed. Lutfi Haziri, the deputy head of LDK, reprimanded the Kosovo side on the dialogue for the persistent lack in transparency and their inability to communicate the results of the dialogue to the rest of the political scene in Kosovo and the wider population. He said that there was a belief present amongst the Kosovo population that there are “hidden agendas” in the dialogue, especially considering the partition of Kosovo or possible “territorial exchanges”.

“The doubt that there are hidden agendas needs to be removed. The Kosovo population believes that there is a conspiracy at play, that the European Union has a hidden agenda in the dialogue,” said Haziri.

“The Preshevo Valley should be part of the agenda of the dialogue in Brussels. It's disappointing that the international community has not focused on the valley.”

Albin Kurti, whose party has been the subject of media intense scrutiny in the past couple of days due to the continued public verbal altercations between Vetevendosje and its splinter wing, the Group of Independent MPs, said that the Kosovo government should not allow for the Brussels dialogue to be “the only political item on the agenda”.

“We cannot allow for the dialogue with Serbia to hijack the agenda of the country. The government needs to intensify the internal dialogue with the Serbian community – this is of high importance. It is a mistake if we spend more time criticizing Brussels than contradicting Serbia. Belgrade evidently wants to create a Bosnia scenario in Kosovo,” said Kurti.

The conference comes a day after the Kosovo government announced that it was “reactivating” the  council that will deal with the technical details of the formation of the Association of Serb Municipalities.

Their decision to reactiavte the council comes days after the announcement by the head of the Office for Kosovo and Metohija, Marko Djuric, and representatives of Srpska lista that the long-delayed formation of the Association of Serb Municipalities will be initiated “one-sidedly” by the Serbian community in Kosovo if Prishtina continues to delay the process.

The reactivation of the “managerial council” will include drafting the statute of the Association of Serb Municipalities, the cornerstone of the new political body. According to the statement issued by the office of the president yesterday, the body dealing with the formation of the association will consist of three segments – the managerial council, that will manage the formal drafting process, the executive council, which will implement the decisions of the managerial council and a national consultative body, which will call in the opinions of members of the civil society, the political spectrum, the media and other experts.

The statement from the president's office also said that members of the international community would be involved in the process. The final draft of the statute and a government directive on the formation of the association – as laid out in the Brussels agreement – would then be subject to the go-ahead of the Constitutional Court.

Neither Haradinaj nor Thaci have since elaborated as to how the managerial council will deal with the fact that certain aspects of the agreement have “disputed constitutionality” nor how this will be solved by April 20th, when Djuric announced that he will coming to Kosovo to launch the formation of the association. Although Thaci praised the reactivation of the managerial council as a “positive achievement” during his closing statement at the conference, he did not clarify whether the agreement would involve the association in any way or whether it would serve to solve the issues that the Kosovo government claims exist with the Brussels agreement.