Following a news alert from the Kosovo Ministry of Returns and Communities that the only Serb returnee from the village of Opraske was attacked by Albanians, and harsh words from the Kosovo Office, the commander of the Istok police station confirmed that the attackers, ethnic Egyptians, had been arrested. Minister Dalibor Jevtic corrected his previous statement. The Kosovo police also officially denied Jevtic’s earlier allegations. Jevtic then praised the police and said that returnees are addressing his ministry with „a cry for help as their security and property are in extreme jeopardy.“

Petko Miletic from the village of Opraske near Osojane was physically attacked today when, according to his testimony, he discovered two thieves in his forest. The suspected attackers of Egyptian ethnicity inflicted injuries on Miletkovic’s head and extremities. He received medical attention in the regional hospital in Pec. His attackers were soon arrested.

The Kosovo Minister for Communities and Returns, Dalibor Jevtic harshly reacted and labeled Albanians as attackers. 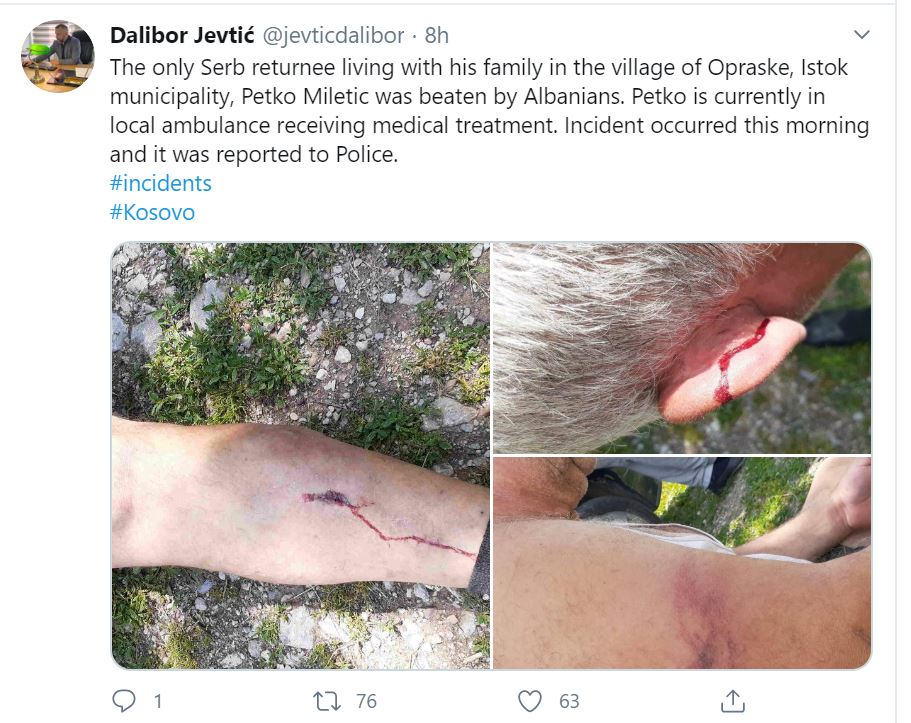 The Kosovo Office also harshly reacted, confirming that the attackers were Albanians. The Kosovo Office also alleged that the incidents were taking place „in front of the disinterested international community, which calls for dialogue between Belgrade and Pristina, but does not do everything in its power to stop the chauvinistic rampage of Albanian extremists.“

Jevtic: Truth is important but the crucial thing is that returnees are constantly being attacked

After Gashi’s statement, Jevtic tweeted that the attackers were Egyptians indeed – not Albanians, adding that „the truth is important but it is also a crucial point that returnees are constantly being attacked.“

The police explained that the persons suspected of „inflicting light bodily injuries“ were of Egyptian ethnicity – Rr. G. (1998) and Rr. G. (2001). The police also added that they have been remanded in custody for 48 hours.

„Based on the investigation and official information, we believe that the public should be accurately and correctly informed that the suspects are not Albanians and that the case is not an attack against persons/citizens (returnees) returning to live in Kosovo,“ the Kosovo police said in a statement.

Jevtic finally reacted with a new statement immediately after the announcement of the Kosovo Police.

This time, he praised the reaction of the police and the quick apprehension of Miletic’s attackers. Jevtic also noted that the police thus „sent a clear message that all those who intend to violate public order and peace will not go unpunished.“

„In all fairness, earlier today, the Ministry of Communities and Returns was informed that the attackers on Petko Miletic from Opraske near Istok spoke Albanian during the attack, but that thanks to the quick and efficient reaction of the police, they were arrested and it was revealed that they are Egyptians,” reads tonight’s press release of this ministry.

On the other hand, this ministry added:

„Regardless of the ethnicity of the perpetrators who committed misdemeanors and criminal acts, it is necessary to arrest and punish the perpetrators of numerous other incidents that have affected the Serb community and returnees in recent weeks and months. Only in this way can incidents be suppressed and returnees could feel safer than they do today.“

The Kosovo ministry added that „the public must be made aware of the fact that returnees have been addressing the Ministry of Communities and Returns in recent months with a cry for help as their security and property are in extreme jeopardy.“ The ministry also added that they have informed the police and other competent Kosovo authorities.