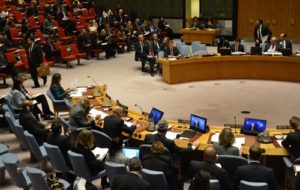 The discussion on the situation in Kosovo is not included on the agenda of the UN Security Council in August. Officials from Belgrade estimate that this is a „big precedent“ with no justifications. The UK Ambassador to the UN, Karen Pierce, pointed out that while Kosovo remains an important issue, the Security Council should also focus on „the most pressing issues of international peace and security“.

„We do not want a spectacle, but the EU is discussing the fact that there are problems and that Kosovo needs a lasting solution almost every month, and the UN is being asked to remove this debate. There are no justifications for it, except to satisfy Pristina’s desire – to verify, as soon as possible, that everything is ideal in Kosovo and that there is no need to discuss it in the Security Council,“ the Serbian Minister of Foreign Affairs Ivica Dacic told Belgrade-based media.

He also explained the UK’s request – that Kosovo should be discussed in closed sessions – without the presence of Pristina and Belgrade and that it should be reduced to twice a year because it believes that the situation in Kosovo is good and that there is no need to discuss it.

Dacic also pointed out that this is the first time in 10 years that a country independently decided not to include the topic of Kosovo on the agenda of the Security Council. He confirmed that consultations will continue and that this is aimed at avoiding the official voting and causing „large divisions in the SC“.

“This move is absolutely against the interests of Serbia and in disagreement with London’s desire to organize a summit with the Western Balkans,” he added.

„Just a few weeks ago, London sided with Pristina and absolutely violated all previous agreements reached in the SC,“ Dacic said, adding that Russia and China firmly advocate that this issue must be included at Security Council sessions, because, to date, no agreement has been reached in the UN.

“Security Council needs to focus on the most pressing issues of international peace and security. The issue of Kosovo remains important. It is a very important European regional issue, but it does not remain of the intensity some 18 years after 1999, that requires quite such regular drum beat of meetings in the Council,” said the UK Ambassador to the UN Karen Pierce.

“We are talking to the Serbian side and also to the Russians about what a more targeted rhythm of meetings might look like. We haven’t reached a conclusion yet, but we’ll carry on talking. Our aim is to try and agree on a sensible conclusion that we can all accept and then we will come back to the Council with that,” she added.

“The most critical thing on Kosovo – is that Serbia and Kosovo both make progress with the European Union who is helping them normalize their relations. It is only through the normalization of those relations that they will be able to make progress in integration towards the EU and that is really vital for both their peoples and both their economies,” emphasized Pierce.

“I really would encourage both the capitals involved not to get too much involved in the question of tactics here, but to set their hearts on that bigger goal and put every effort they can into working with the EU high representative to normalize their relations,” she concluded.

The request for less frequent sessions of the UN Security Council on Kosovo, which are usually held on a quarterly basis, has been repeatedly made by official Pristina, along with the request to reduce and reconfigure the UN Mission in Kosovo (UNMIK). This mission has been minimized in the field since 2008, while Belgrade emphasized its importance for compliance with Resolution 1244. However, the President of Serbia, Aleksandar Vucic, pointed out that it does not pertain to Serbia, but to the Federal Republic of Yugoslavia. Pristina’s request was mainly supported by Western countries, such as Britain, the United States, France, while Russia objected to it.